Before we jump into 2006, let's quickly recap how the Warriors 2 Stepped Texas to end off 2005. I've never been a fan of Texas (an overweight red state that's home to the dumbest president the United States has ever seen). They're the anti-Bay Area. We're too progressive for them and it was great to see the Warriors demonstrate some progress against both the Mavs and Rockets. 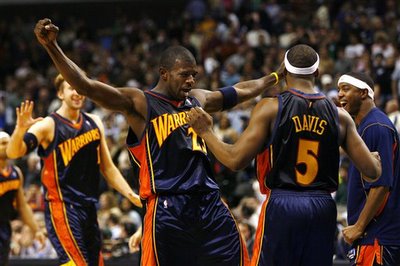 Boom Dizzle + JRich = 66 points!
You can argue that the Dub's have the league's best backcourt duo and possibly the best trio (if you include trigger happy Derek Fisher). Baron and Jason were on fire against the Mavs, hitting big shot after big shot and taking it to the hole with authority. JRich looked incredibly confident out there, especially when he knocked a big trey against the former Warrior fan favorite Eric Dampier (joke). Boom Dizzle dropped a game winning jumpshot from the top of the key to seal a clutch victory against the second best team in the West (without Amare the Suns are 3rd).

The Mavs are the first real Western conference team that the Warriors have beat... in Dallas too! These are the types of wins the Warriors need to make the playoffs. Let's hope they can continue to be tough on the road against conference foes.

Warriors Wonder
I'm going to get dissed for this one, but here goes-- Yes, the Boom-Rich backcourt was magnificent, but honestly- we all expect these types of big games from them. This award goes to Adonal Foyle who had 4 HUGE swats at key times during the game. As much as we love the guy, the cold hard reality is that he is a very poor starting NBA center. BUT, he is a tremendous bench/ role player if he only has to play 10-15 minutes a game. He can bring it on the defensive end and be a game changer if he plays short bursts. Let's hope the Warriors coaching staff and Adonal realize this. He will never be worth that lucrative offer sheet he signed last summer, but he can be a key role player who brings a TON of stamina off the bench. 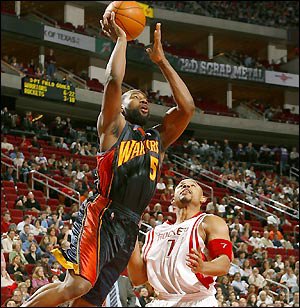 Houston, WE have lift-off!
Earlier in December the Rockets stole a game from the Warriors in Oakland. Yao Ming dropped 30 points and collected 16 rodmans in that game. With Yao MIA last night, the Warriors had a golden opportunity to steal one against the struggling Houston Rockets. TMac was still on point (32 points and 10 boards), but the Warriors were able to hang on. McGrady uncharacteristically missed 2 treys near the end of regulation. A good solid victory for the Warriors.

Since the Warriors inserted Ike Diogu into the starting lineup, they have racked up 3 W's in a row. Make no mistake Ike is a definite reason for the success. Ike's a force to be reckoned with when he has the ball down low. His soft hands and footwork are impressive. Two things that he needs to improve on for the Warriors to keep winning are his rebounding and fouls. He has the skills. It's just a matter of time...

The Boom-Rich backcourt. After the spectacular performance against the Mavs, Baron and Jason came back the next night to drop a combined 46 points, 12 assists, 11 rebounds and 4 steals. ALL STARS.

If you're part of the Golden State Warriors BLOG faithful, you are probably all too familiar with our
44 Reasons why giving Mike Dunleavy 44million wasn't the brightest idea.
Fantasy Junkie wrote in Part II that
asking Dunleavy to "run AND dribble" (#16) was a recipe for disaster.
Now Fantasy Junkie's incredibly sharp, but I wasn't entirely sure if Mike had that much trouble running and dribbling. Dunleavy's an overrated ball handler, but I never thought he was Dampier-bad when it came to dribbling. Well, guess what? I watched the Houston game and I was wrong. Thanks to the trusty photographers who always seem to provide some good old Funleavy Foto Fun, I can show you what I mean: 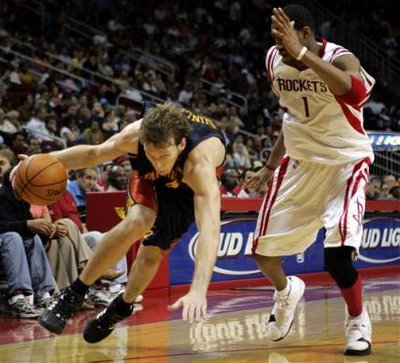 
By the way after whinning about the Warriors fans booing him at the Arena, Dunleavy has simply been on FIRE with his shot against the Mavs (2 for 8 shooting) and Rockets (1 for 5). Here's what Mike said after last week's Celtics game after getting booed for 3 low IQ mistakes:

A bizarre moment took place in the third quarter. The crowd got all over Dunleavy for kicking the ball out of the low post and passing up a shot. Dunleavy gestured to the crowd with his hands as if to say "Relax, already!" He did the same thing moments later after he nailed an outside jumper. Dunleavy was not amused after. "I'm really tired of the negativity around here," he said. "We're trying our best. We play hard. If they're going to come out as fans, they shouldn't be negative. I didn't see enough (Boston Celtics) green out there to get so many boos." Dunleavy later passed up another shot in the fourth quarter and the shot clock ran out on the Warriors.

Look Mike- If you're going to stink it up and keep stealing paychecks from Warriors fans (because that's who the money comes from ultimately) then fine. BUT don't ever blame the fans for your poor play. Be a man and quit complaining.

By the way- does Warriors management know how unpopular Mike Dunleavy is with Warriors fans? Scan some of the Warriors message boards around the net like ESPN's Warriors board, Warriorsworld, Real GM, Golden St Warriors Board, or the SJ Mercury. There are a LOT of Dunleavy critics who say some pretty nasty things about him. They're so harsh, they make us look like his Valentine date. Trading Dunleavy and bringing in someone that Warriors fans might actually like seems imperative. Hmmm, maybe Adonal has a super althletic younger brother who can play small forward?