When the Golden State Warriors were walking through their locker room tunnel last night after a BEATDOWN from the Indiana Pacers, they had to have been thinking only one thing.

"I hope Hash isn't writing the Post Game coverage on this one..."

Well boys, sorry to shatter that hope, but I AM covering it. And you're gonna like what I have to say about as much as I liked what I saw last night.

Before I get started, I am going to go ahead and suggest that this horrendous display that we put on against the Pacers may have been a gesture of good faith. After all, we're not the only team in the running for Ron Artest. Perhaps we were attempting to show Indiana that even if we got Artest, we would be no threat to them! Really, what kind of team ends a first quarter down by 20 points?

Sadly, deep down inside I know this isn't true. So that leaves the question out there with no answer. What kind of team goes down by 20 points after one quarter?

Let's get down to business. 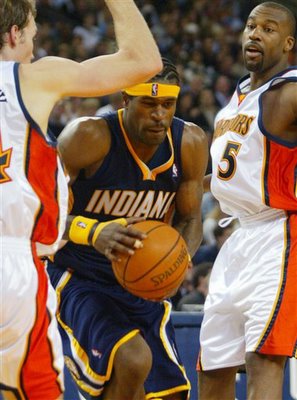 Okay, first quarter. No Artest, no O'Neal, no problem, right? Turns out the only thing that scares our boys more than Indy's starting squad is their bench. The W's got KILLED on boards, points in the paint, and 3's. When the smoke cleared, we were down by 20 with Indy having gone 4-5 from beyond the arc. We got embarrassed.

The rest of the game followed suit. Fisher's points came entirely off of free throws, but it didn't stop him from shooting. Actually, our whole team blew their 3's but that didn't stop any of them from shooting them. I'm not even going to throw JRich or anyone else on the team their props for fighting the good fight to get us back in it near the end. We should have never been in this position in the first place.

I, for one am getting tired of repeating myself but let's at least TRY to represent some sort of inside game. The sad truth is that this trend of firing up 3's is just NOT working. I would rather see us fail like this from inside the paint than have everyone constantly resort to the long bombs. I'd be happier to see our boys go 1-6 by going in strong and taking higher percentage shots.

We do NOT have the best 3 point shooters in the league. This is shown both subjectively and statistically. Why are we one of the top 3 shooting teams in the league? (Second only to Phoenix I believe.) Our beloved W's are faced with a choice.

Frankly, I'd prefer that we do the first one. Are we gonna lose a few games trying this option? Probably. But how is that any different then where we are now?

The good news is that our inside guys are starting to show a tiny bit of spirit. It's tough to argue that starting Ike has made no difference. Now as a center he's nowhere near top notch but his performances have been certainly better than Foyle's were in the past. I'm glad to see that last night he was aggressively going after boards as well. To you Big Ike, I say congrats on your first double double! 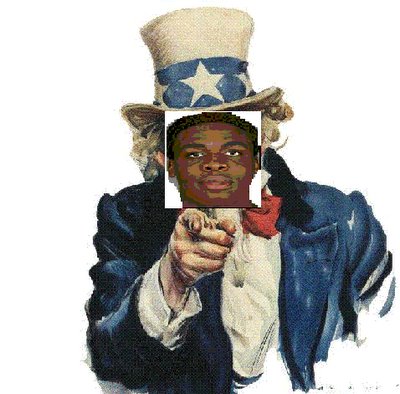 Ike wants YOU... to stop shooting so many goddam 3's.

Speaking of double double's, let's all hope for the best for our man T-Double. Having left the game with a sprained left ankle, one can only worry about how we would do without his strong inside presence.

Dun. Not bad kid. Somehow managed to throw up 19 points, 6 boards, 4 dimes, and even 2 jacks. Can't say that you didn't do your part. (Although it's tough to argue that anyone really did what they were supposed to do yesterday.) You didn't look pretty getting those numbers, but... well I can't really think of a way to finish that sentence.

Despite yesterday's Greek Tragedy, there were two highlights of the game for me. Well, the highlights actually happened during the halftime show, so technically there were no highlights to the game.

We've got a lot of time until our next game. I'd be very interested to hear some suggestions about what needs to get done in order for the W's to be the team that we all know it can be. 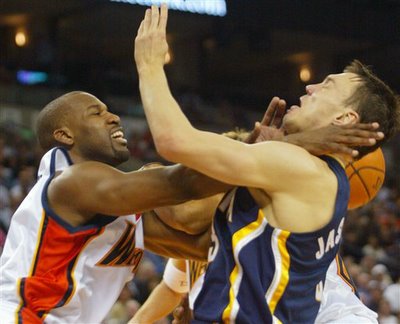 WARRIOR WONDER: WE LIKE IKE! 16 points and 12 boards for your first NBA Double Double?! I like where this one is going. Happy New Year IKE!