The great thing about Tivo is that you can fast forward parts of the game that make you mad. No one to blame but Monty for this Saturday Night Loss:

Highlights per quarter:
1st Quarter: Smush Parker and Kwame single handedly ran us into the ground with their fast breaks and alley oop dunks. Kobe made a couple sweet plays but for the most played team ball. As for the warriors, there was nothing special. A nice block from Ike was quietly forgotten by a laker fast break. Richardson's shot is vastly improving especially on his three pointers. Pietrus came in with 2 minutes remaining in the quarter for Dunleavy, and made a sweet spin move around Odom for two. Oh how happy I am Pietrus is back!! 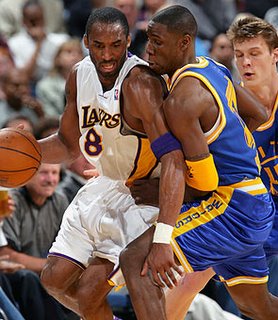 (AP Photo)
So Monty,  why didn't we put Pietrus on Kobe? Fisher you say?

2nd Quarter: Pietrus was a little rusty with a couple missed shots but its only a matter of time. Ike "foul prone" Diogu got the rookie calls and Kobe got away with the "super-star" no calls. What was impressive was Smush Parker again stealing the ball from Ike and dunking on him. Dunleavy made an unbelievable defensive play when defending a fast break and crouching away to give the lakers an easy lay-up. If you didn't pick up a hint of sarcasm on that last line please grow a sense of humor (or maybe I'll work on mine). Even more frustrating is Fisher's reenactment of Kobe as he tries to drive the lane and create his own shots.

3rd Quarter: At this point the scoring lead is going back and forth between the warriors and lakers. Kobe playing team-ball took all of us by surprise and we saw little glimpses of greatness from the warriors, but too much inconsistent playing. Dunleavy continued to disappoint even after i gave him the benefit of the doubt earlier today. Most exciting action in the quarter came when kobe had a fast break and dunleavy decked him in the face causing a scuffle. No one was ejected but i'm glad dunleavy wasn't afraid to get physical.

4th Quarter: What a block from Dunleavy on Odom. Did anyone see that? Watching Dunleavy makes me feel bi-polar. One play you are so excited from his play, the next you are down on him. Why is Fisher guarding Kobe? For the last 5 minutes, Kobe went off scoring 10 points while being guarded by Fisher. If Monty would have put ANYONE else on Kobe then the game could have been closer if not ending in a Warrior win.

Final Grade of the game: C-. Could have been a C+ if the warriors would have pulled out a win but I blame Monty for his lack of aggressive coaching.