Without the suspended Ray Allen, the Sonics are one of the worst teams in the NBA. Exactly what the Warriors needed to snap the 5 game losing streak!

Just one of the many highlight jams from this afternoon!
There's no better way to end a losing streak than against a bad team minus their superstar. The Warriors looked fabulous at the arena tonight, but let's be honest this game doesn't mean much. A blowout against the Sonics is nice, but let's remember they are one of the worst teams in the Western Conference. Still- it was fun to watch.

The Boom-Rich backcourt was on point again. Boom Dizzle nearly got his 2nd triple double in a row. Baron took it to the hole and dropped dimes on the regular. Aside from letting Luke Ridnour blow past him a few times, there isn't much more you can ask from B Diddy. Jason's 26 points, 5 boards, and 4 assists ain't no joke either. He skyed for several highlight jams.

He undeservedly started and played major minutes. He didn't show up for 25 games this year. He continues to shoot blanks on wide open shots when he's the 4th or 5th option. He was abused by Bryan Bowen of the Rockets. He was severely outplayed by backup Guard/ Forward Pietrus when MP was healthy. He complained about his teammates and coaching in the media. And what happens? It's shocking. The Warriors reward Mike Dunleavy with even more playing time (over 38 minutes in the last 5 games) and the team gets him more shot attempts. Is he related to Chris Cohan in any way?

Dunleavy played a team high 42 minutes and actually put together a good night with 22 points, 4 rebounds, and 3 assists. Props to you Mike and all two of your supporters. You seem to have turned it around after undeservedly getting chance, after chance, after chance, and well... after chance. Usually Dunleavy's the 4th or 5th option on the court, so he's going to get a bunch of open looks. If the Warriors front office is going to insist on playing him so many minutes, Mike needs to provide something and knock down some shots.

It's great to have Mickael Pietrus back. 19 points in 14 minutes? Let's hope the only reason he played 14 minutes and not 42 like Dunleavy is because the team is trying to ease him back after the injury. Otherwise- management and the coaching staff are INSANE. Air France had a NASTY one handed jam with the left in the 2nd quarter. And 1 mixtape worthy!

Troy's struggling a little bit with his shot, but it's good to see him contributing with some nice passing (a real nice feed to a cutting JRich and 3 dimes overall) and 7 boards. When Troy slumps it's 12 points and 7 boards. Not bad at all. He'll snap out of it.

DJ Fuzzy Logic always hypes up Adonal Foyle's great outlet passes. I usually fall to the floor laughing when Fuzzy Logic does (since I don't believe it), but on MLK Day 2006 Adonal's outlet passes weren't a joke. They were off the hook! Foyle's outlet passes lead to fast break buckets or free throws for Baron, Pietrus, and JRich. 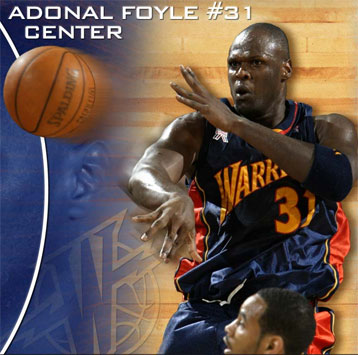 The best outlet passing center in the league?

It's a little strange that Ike lost his starting job to Adonal Foyle this game. He's out of position at the 5 spot, but that doesn't explain why he only got 9 minutes of playing time today. Is Ike on the trading block?

Well, it looks like the Warriors screwed up again in the 2004 draft. Biendrins is a good kid and if he could learn to stop fouling he'll be a good shot blocker and rebounder, but wait a couple of years and he'll have nothing on big man prospect Robert Swift. The Sonics took Swift right after the Warriors selected Biendrins. Swift is going to be smooth. He is already more offensively developed than Biedrins will ever be. It's amazing if you think about it actually- the Warriors selected the WRONG white guy. Usually they just take a white guy (ahem, Todd Fuller, Mike Dunleavy, Andrew DeClerq) and it turns out all WRONG.

WARRIOR WONDER
Adonal Foyle. Gotta love them outlet passes! (We'll ignore that ugly wide open shot that he tried to bank but hit the top of the backboard- it was FUGLY.)

Make sure to post your game thoughts in the comments. We've been getting some great discussions going!