To Recap: We stink.

Well not necessarily, but when it comes to crunch time, we are as clutch as the coyote missing the road runner! NOT EVEN CLOSE.

First three quarters were brilliant and the crowd was electric. Pietrus came back for full effect and the warriors showed promise of team playing. As I sat in the crowd cheering with the fans we all felt a little ease now that the whole Artest drama was over.

"Maybe this will make Dunleavy and Murph play with more confidence knowing they won't be traded" sentiments passed all through-out the stadium. It seemed true but only for a short moment.

Quarters 1 - 3:
Everyone played exceptionally well. Passing was the key. JRich and Troy had a couple sweet give and go opportunities and Dunleavy drove to the basket giving us chances at the line (which we did not capitalize). I wonder if or why Monty does not have the warriors spend 2 hours a night on their STUPID free throws! I mean honestly. How much money can one make and not be able to make a stupid free throw!! It makes NO sense.

Quarter 4:
This is where the ultimate let down began. Well actually it was the end of the third quarter when the warriors let dallas make a couple 3 pointers with less then 20 seconds left. This was extremely embarrassing.  It wasn't like Dirk or Stack took the game over, but the warriors were 1 for 14 in the fourth. Howard and Harris running the floor untouched didn't make it any easier to watch.

I'm too angry to write this post so I will end on a good note. The picture below illustrates our night. Dallas dunking all over us. But if you look closely you can see none other then YAOBUTTAMING :) thank you and good night. 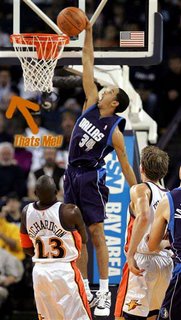 Yea thats me! I decided to remain seated for this play!
Game Recap from Espn.