I'm thinking of ending the game recap here, as for anyone that saw the Mavs - Warriors last night, the above description is all they need to sum it up.

But then I remember that there are some who:

For those of you that fit into either one of those two categories, I'm here for you. Let the pain train begin. 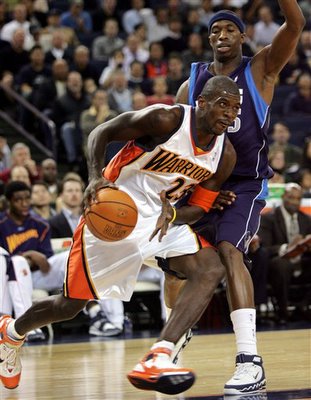 
Thanks to an old friend, I was actually able to be at the Arena last night to witness this travesty in person. When the game first started, I actually remember thinking to myself, "Wow, the Warriors are playing some pretty decent basketball!" This isn't to say that they were the most dominating force out there, (they let the game get close at times), but when push came to shove, one of the Dubs was always able to step it up and keep a respectable lead.

My thoughts going into this game were,

"Contain Dirk, and we can come away with a W."

"Remember, they stop serving beer after the 3rd quarter so plan accordingly!"

In respects to the game, I'd say the first thought was the most important. And we did contain Dirk. Or rather, he seemed to contain himself. Either way, he didn't get a lot of touches, and whether that was a matter of his own free will or our great defense, it didn't matter to me. So why then did we not walk away with a much needed win?

It was the 4th quarter when the nightmare began. We got STOMPED on. And we did nothing to stop it. The Mavs were literally dancing in the paint with us on every possession. Sure, sometimes they missed. But it's easy to grab boards over us when Derek Fisher is the only one on our team going after them. And so the beat down continued.

Yes, there were some Mavs fans there. One of the highlights of my night was when Dunleavy dropped a simple pass out of bounds and a loud drunk Mavs fan behind us started heckling him on how crappy he was. You should have seen the look on his face when, contrary to his expectations, all the surrounding Warriors fans burst into applause. That's when it hit me that Mike Dunleavy sucking is something that Warriors fans and opposing team fans can all agree on! Way to promote unity Dun! 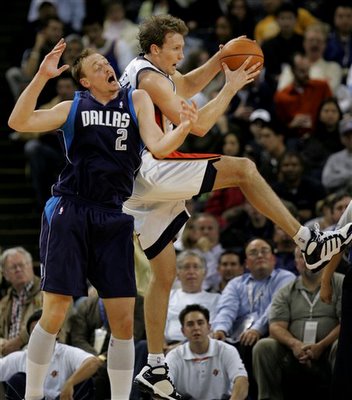 Wow! Even a guy on Ecstacy can shut Dunleavy down.

All said and done, the dubs scored a petty 15 points in the final quarter. The lead slipped through our fingers like... um... some sort of viscous liquid that by definition would be slippery. (Someone call the analogy police.) At the end of the game, the Warriors fans were forced to take the walk of shame back to their cars, most of which were parked at the local BART station.

As I stepped out of the Arena, I stopped for a second to let the wretched display of basketball I just witnessed set in. An old woman who exited behind me saw me. When she noticed that I was wearing a "The City" shirt, she came up to me, still stunned herself, and asked:

A profound question. Monty, your comments?

This loss has sunk us into a 3 game losing streak. And with the Artest trade all said and done, it doesn't look there will be a light at the end of this tunnel anytime soon. But on the plus side, those of you that expressed nervousness about losing our young talent in the Artest trade; well.. we have no choice but to expiriment now. Despite dismal showings tonight, I would like to see Ike and Pietrus log more minutes out there. We seen many glimpses of raw talent from both of them and I, for one, do not yet think that they are flukes.

If there is one thing I can credit Warriors fans for, it's never losing hope. So, my brothers and sisters, now that Artest is off the table, what are the next steps to turn the past couple of months around? Monty, Mullin, hope you're reading.

WARRIOR WONDER: T-DOUBLE! Mr. Consistency came strong with the points (22) when needed and pulled down much needed boards all game. (14) I can't say enough good things about how this kid plays. When the team seems to lose their mojo out there, this guy still knows that he is out there to do a job. And he does it well.
Also, not to be ignored, 10 assists and 26 points was supafly Baron. Truth be told, I was happier to see the 10 assists than the 26 points. We need you to create plays with dynamic passing, not end plays with never ending 3's. Step in the right direction!