BAY AREA PUBLIC ANNOUNCEMENT: Warriors Nation and the general warrior loving public here by decry the way our starting line-up has been utilized. Therefore, we would like immediate benching of the following players:

M. Dunleavy - For averaging poop, and playing like crap.

A. Foyle - Because he is better off the bench.

M. Pietrus - did you see him last night?

I. Diogu - Well this could be refuted but you get the point.

Last night Baron Davis blew up. 29 points and 16 assists! He had a fantastic game and was a pleasure to watch. But I do not want to focus this recap on Baron for we all expect MORE games like this. No, for this recap I would like to discuss three important factors to this victory, Pietrus, Monta, and our hustle players.

Pietrus: This guy was a stud tonight. Box score doesn't really do him any justice to what he did on the floor. Some excellent defensive plays were overshadowed by his incredible dunks as he ran the fast breaks and moved between defenders. Pietrus is BACK and better then ever. Still a little rusty for being out over a month, the fans were happy to see his aggressiveness on both ends of the court. His performance tonight was capped off by his sweet ESPN double clutch dunk. Great game Pietrus! 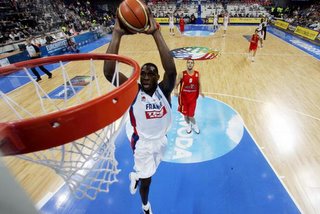 They called him Air France all night.  I'll even wear a french flag to see him start!(AP Photo)

Monta: Now I've been praising this kid from the first day of preseason when I was interested to see a high-schooler the size of me, play in this league. I think warrior fans last night finally saw what management was hoping for all along. Monta bested last night's performance (against lakers) by having a career night with 14 points, 5 rebounds in 27 minutes of play. The kid also shot a fantastic 70% shooting. What was more impressive was his level of confidence and speed. Monta was all over the court following Pietrus' lead of being aggressive on the defensive end as well as the offensive end. There were so many times where the announcers screamed for Monta to take the ball to the hole. I think he was a little reserve in trying to get Baron the ball, but I hope Monta comes off the bench more and more. This kid can play and should have more of an opportunity to learn on the court. 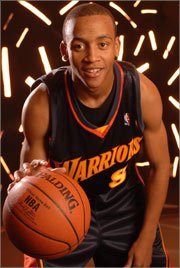 Little in size, Giant on the court!

Hustle Players: Ok so we beat the Blazers. No big deal. Only the worst team in the west right? Well we beat them pretty convincingly without our 2 starters in JRich and Dunleavy. Is it a coincidence we play better without Dunleavy or JRich? No, tonight was about the other players. Monta, Pietrus, Ike, and the rest of the bench actually played like a team. There were no individual games out there except your occasional Baron move or Fisher "wanna-be Kobe" move. Apart from that I was finally pleased to see some outlet passes, pick and rolls, and unselfishness. Play of the night was a 3 on 2 fast break for the warriors, were fisher drove the lane, passed to Murph who could have laid the ball up or dunked but instead slapped the pass to Monta for the secure points.


In conclusion, we beat up on a crappy team. Nothing to get excited about. However, we desperately need to play Pietrus and Monta more. No doubt about it. Coach has got to get that through his thick skin! Bringing Dunleavy off the bench is fine until he can show he deserves to start. Holding Pietrus and Monta back just won't help us get any better.


Warrior Wonder: Baron deserves it but I give my nod to 2 players tonight. Pietrus and Monta, for the reasons above. These two players need more playing time. Flat out. Check it out: both had 14 points, 5 rebounds, and both played 27 minutes. Next game against Seattle will be a true test to see how these guys play against a better defensive team. I'd like to see them both play 31 minutes, scoring 20 points each and having 7 rebounds.

Boxscore Jessica should be our Box Score Icon for now on: