Share All sharing options for: Rumor: Meta-analysis of the Troy Murphy Rumors

Carlos Boozer and Troy Murphy are now regular guests on the rumors page, though it's rare that actual specific deals involving either of them get mentioned. Which means either one could get traded tomorrow, next year, or never

Yup, that pretty much sums it up. Even though T-Double recently earned a C+ on his Golden State of Mind report card, the Warriors shouldn't be in a hurry to trade him away. Sure, as a jumpshooting Power Forward Troy's game doesn't fit with the Warriors, but he is by far the best rebounder on a poor rebounding team. Now, Adonal Foyle and Mike Dunleavy... 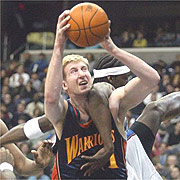 Nothing stops Troy from grabbing those boards!

Brandon, Bay Area: Are the Warriors moving Troy Murphy? Also, is there much interest for Pietrus?

Chad Ford: They've talked to a number of teams about moving Murphy and have included Pietrus as a way of sweetening the deal. They had that offer on the table with Chicago for Chandler, but the Bulls decided to go with P. J. Brown because of the cap flexibility it gives them next summer. The Jazz have shown some interest in the past, but the truth is that they're running out of teams that would be willing to absorb that salary.

A Troy Murphy-Carlos Boozer trade makes a lot of sense for both teams, but sense hasn't exactly been a strong point for the Warriors (mis)management.

What realistic Troy Murphy trades can you put together that help the Warriors? Try using ESPN's Trade Machine or RealGM. Make sure to justify the trade for the other team. If your trade is close to something that actually goes down, we'll give you a special shout out.