Warriors vs Sonics: We Want Our Mascot Back

Share All sharing options for: Warriors vs Sonics: We Want Our Mascot Back 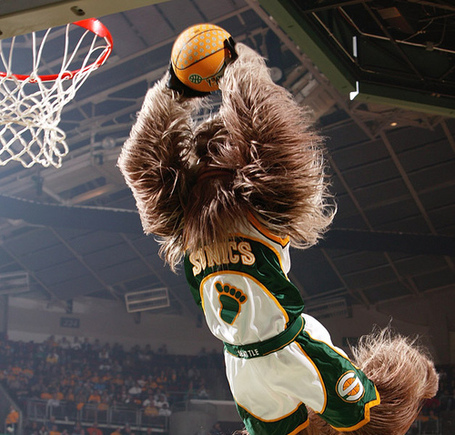 The Warriors first home game this year comes against the mighty Seattle Supersonics. Even though it's just a preseason game I'm sure fans at the arena will be excited to see how the new guys, the young guys, and the old guy look. But many fans will be angry as 12 guys with Thunder on their jerseys trot out yet none of them will be doing flips, throwing out free t-shirts or walking on their hands the length of the court. Something is wrong with that. Like someone said in the comments awhile back, we should take the Sonics mascot now that ours has been stolen. It's not like Seattle needs him. Well at least lets borrow him for this game. Or maybe Thunder will make a guest appearance and show the Thunder how to be Thunder and bring the thunder.