Warriors on the Web

Share All sharing options for: Warriors on the Web

[FJ Updated: 1:30] Added in the interviews from after practice. After the jump. 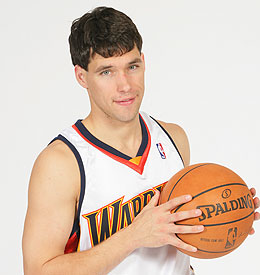 If you’re looking for a sign the Warriors’ point guard position is anything but settled, proof was walking around the practice facility with a ball under his arm on Wednesday.

Dan Dickau was in the house.

Dickau has played for six NBA teams and was just released on Monday by Air Avellino, an Italian team that plays in the Euroleague.

More Warriors articles after the jump...

"It was a challenge," Harrington said. "It's something I don't want to have to go through this year. I just want to be on the court and play more consistent minutes, and I think I did everything I was supposed to (do) to make sure that happens."

Harrington, whose unhappiness has led to plenty of trade speculation over the past year, said summer talks with vice president Chris Mullin have renewed his optimism for being an effective and key player for the Warriors this season.

"It's C.J.'s job right now to lose," Nelson said after Wednesday's practice. "From what I've seen in this camp so far, he's done the best job. I see all three of the point guards playing this year."

That third point guard Nelson is referring to is not Monta Ellis, who is out until at least December after left ankle surgery, but Dan Dickau. The Warriors signed the journeyman point guard to a contract on Wednesday.

Warriors to Meet with Ellis' Representatives
AP via ESPN

The Golden State Warriors plan to meet with the representative for point guard Monta Ellis next week to discuss any potential disciplinary action or fine because of his mo-ped-related ankle injury.

Will he be fined?

To give themselves some insurance in the backcourt, Golden State signed Dan Dickau on Wednesday and coach Don Nelson plans to carry three point guards on his roster -- at least until Ellis returns to take one of those roster places.

"Once he gets off his scooter," Nelson said half-jokingly of Ellis after practice Wednesday. "Funny thing is, he's probably faster than any of the other point guards I have out here on his scooter. ... It's good to have [Dickau] in camp. I'm going to keep three point guards. Veteran point guards are hard to find."

Mullin May Not Be Long for the Warriors

Let me set the scene for you: The Warriors lost half their team and staked their future on a guy who hurt himself on a scooter. On media day, Stephen Jackson -- arguably that team's second-most important player -- said he's discussed an extension with the team president Robert Rowell and "them."

You'd assume that "them" would've included Chris Mullin, the general manager. But after Mullin refused comment, Jackson said that the GM hadn't been around.