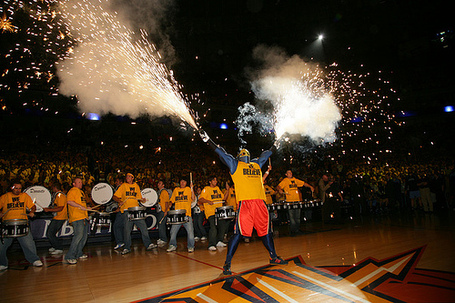 Perhaps this really is the end of the We Believe era

The Warriors learned that, because of the staggering lack of originality displayed by the Oklahoma City franchise (formerly Seattle), they no longer can bring us the mute acrobatic stylings of Thunder. He's had to be let go, and on behalf of the entire sentient planet, let us offer our heartiest congratulations to the Warriors on this, the day of their deliverance from their least inspired moment since the Wilt Chamberlain trade.

Thunder has been part of this franchise for some 12 years and his likeness is featured on the team's primary logo, though the team doesn't use that image much anymore.

Warriors team president Robert Rowell is willing to make the switch for the benefit of the other Thunder, formerly the Seattle SuperSonics. When the timing's right, that is.

He just might have one — leave Thunder in China during the team's upcoming trip to Asia.

"He might get lost in the crowd over in China," Rowell said. "There are 1.3 billion people there." 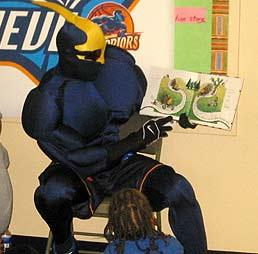 I guess he'll have to go back to his previous job, kindergarten teacher.

So long Thunder. You never said anything to me, but you seemed like a cool mascot. Of all the mascots I've met, you're definitely the coolest.

We'll need a new mascot. Hardcore had started a fan post awhile ago on it, "Nominations for New GSW Mascot"

Can we get a real warrior now?