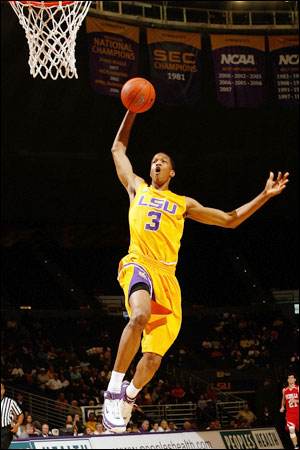 The regular season is almost upon us so lets finish up these player predictions. This time we have the rookie out of LSU, Anthony Randolph. He's the kid who turned some heads in the summer league showing he can do a little bit of everything. He can handle, rebound, shoot, and score. He seems to have a knack for the game. One of his biggest problems? Something that plagued him in college, turnovers. Take care of the ball young man. He will be special though.

"Randy" didn't play in the league but judging by his draft position, his college season was below expectations. He was supposed to be drafted as high as #3 but fell alllllll the way to the Warriors at 14. Maybe Mullin lucked out. His ceiling is high since he's got superior athletic talent, but perhaps is too raw and will take a long time to get anything out of.

2008-2009 Prediction
I know I was hyped about this kid's potential after he rose above all the junk that you typically find in summer leagues. He was the lone bright spot during the summer league for the Warriors. Sure there were other guys who played well, but none that stood out as much as Randolph did. What I also like is the confidence that maybe borders on arrogance. Where most rookies come in and say that they just want to do their best, Randolph comes right out and says that he can and wants to be one of the best to ever play. Whoa. I don't think he'll reach that point - I'd be ecstatic if he did, but just having that inner confidence and hopefully drive to do his best, is a pleasure to see from such a young guy.

During the summer league, he even outplayed the "veterans" Marco Belinelli and Brandan Wright. And heck, he even moved ahead of Brandan Wright on the depth chart during the preseason.

But he's still a rookie and he's extremely raw. In any other Don Nelson season, I don't think he'd see the court more than 35 times and would average around 5 minutes per game.  He'd play something similar to what Brandan Wright did last year. But this isn't really a typical Nelson season. He's lost his star player - twice now. First Baron leaving via free agency and then Monta leaving via stupidity. That opens up some serious playing time as everyone else shifts around and might play out of position. That could lead to the kid getting some serious burn if he can force Nelson play him.

I'd say he plays in about 60 games averaging 8 minutes per game. He'll certainly wow you a few times this season with his ability to handle for being such a tall guy. But outside of that, I don't expect much. The key season will be his 3rd year when I bet everything starts to come together for him and he really takes off.

I love videos, so I assume you love videos. Check out the Randolph highlights.