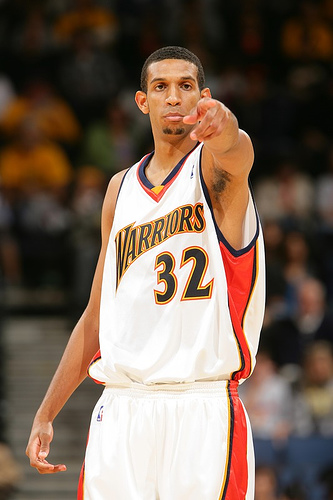 Just a few more days until opening night aka GSOM Night 5 (did you get your tickets yet?) so we'll continue to finish up these player recaps and predictions. There's just a few more left. Up next is the guy who is most famous for being the guy we traded Jason Richardson (JRich!) for - Braces aka Brandan Wright.

On a side note, what will it take and how long will it take for people to forget that Wright was traded for JRich? (yea, yea, yea until GSOM stops reminding you haha).

2007-2008 Season Recap
Grade: D+
Wright barely got any time on the court, whether or not that's his fault is up for debate. He didn't get time because Nellie doesn't play rookies? Or he didn't get time because he never earned it in practice? The fact is, he just didn't produce anything last year as the #8 draft pick. Unfortunately, he wasn't expected to produce anyways since everyone called him a project. That sure didn't help us get to the playoffs in consecutive years. Had we traded JRich for someone Nellie could have used in the rotation, I wonder how many more games we would have won. Supposedly, Wright is going to be a key piece in the Warriors' youth movement. Unfortunately, you have to produce something to be part of a youth movement. Wright just didn't do that. He had some nice games and even had a stretch towards the end of the season where he played decently, but overall it wasn't enough to get a better grade.

Last year he showed he was raw. At times, he looked nervous, tentative and unsure of what he was supposed to do out there. The only times he really looked comfortable were on the break where he was just running and letting his athleticism take over. The guy is a freak (in a good way). Apparently Mullin likes to draft athletic freaks right now (Wright and Anthony Randolph).

Defensively, he got pushed around but made the occasional highlight reel play by swooping in to block a shot. He did well challenging shots in the paint because of his freakishly long arms.

Overall, there was nothing about his rookie season made me think he should get anything higher than a D+.

2008-2009 Prediction
Wright is going to have every opportunity to play this season. There are no excuses this season. He's had one full year in the system, one full offseason to prepare, and now has nobody in front of him for the backup PF spot. If he's not on the court, nobody can blame Nellie for not playing the young guys, it'll be all on Wright's narrow shoulders.

He's got to show he can play in this league by playing 10-15 minutes (hopefully more) every night of every game. He shouldn't have any DNP-CD's. There's really no other option at backup PF right now so the job is his by default. Heck, even Nellie has verbally committed to playing the young guys more this year. Even though Nellie usually says whatever he feels like no matter if it's true, I believe that he's going to give the young guys every opportunity to play this year.

The one thing I'm worried about this year is that he's going to be playing against the big boys this year. Last year, in garbage time, he got to play the other end of the rotation guys. This year he'll be facing the second string guys and the starters. Not only does it get harder to score, but it's a lot more difficult defensively. If he can't hack it defensively, he just won't play.

No excuses this year for Wright. Either come to play or go home. I expect him to produce. I predict he averages 12 minutes per game and makes some nice strides in his development. Next year, year 3, should be his breakout year if everything goes according to plan (crossing my fingers). Given the glimpses of talent we saw towards the end of last year, if he worked hard during the offseason to bulk up and work on his weaknesses, he's going to be part of that Warriors' youth movement.

Even though it was garbage time, this was one of the best dunks of the season. At GSOM Night 3 no less.