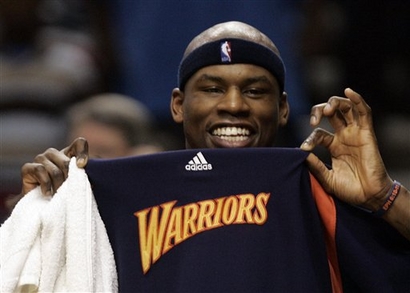 Al Harrington is up. It was his first full year as a Warrior after coming over from Indiana the previous January. He's still one of my favorite guys on the team, but there always seems to be something missing from his game. He never quite fills the role or the expectations.

2007-2008 Season Recap
Grade: B-
Amidst all the hoopla and attention around Baron, Monta, Jax, and Beans, Al was real quiet last year and barely got any headlines. The only headlines he did get were the ones questioning why he was so quiet, why he was having a down year, and why his minutes were down. He went from just over 32 minutes per game when he first got here to just 27 this past year. And his shooting percentages dropped, most notably his 3pt shooting. He shot 45.8% in Indiana and then 41.7% here and then last year he fell all the way to 37.5%. What also hurt was his decline in overall field goal percentage. He shot 43.4% last year, just unacceptable. Part of that is due to his inability to finish strong in the paint. He's able to get by his defender extremely well and get his shots off or get to the rim, but he just can't seem to finish. He doesn't seem to have the explosiveness to consistently play above the rim. It's something I'd love to see him get better at because he's got the athletic ability to become a very good post player.

Al went from a key piece in that magical playoff run as the starting center and matchup nightmare to someone who couldn't find his role on the team. Was it his job to step outside along the 3 point line and fire three or get into the paint and post up? Was he supposed to bang inside with the big men or float on the perimeter to open up the lane? Perhaps Nellie mismanaged his minutes and never gave him anything consistent where he felt he wouldn't be pulled after one mistake. Playing where you think you can be pulled at any instant makes it difficult. But clearly, he had to earn that right just like Baron, Jax, and Monta did. His play last year didn't give him that right. His numbers were down across the board and he just didn't have that same fire, intensity or confidence that we expected from him.

2008-2009 Prediction
This is tough. I feel like the only reason Al is starting this year is by default. Nellie just doesn't have an option that he'd like so he's going with what he's got. It's either start Brandan Wright or play Beans and Turiaf together. So it's up to Al to step up his game this year to make the most of his opportunity.

Al's going to get a great opportunity to make up for last season's down year. He should be averaging in the high teens and playing 30+ minutes per game. I expect him to do that this year given the lack of other scoring options. I'm going to be interested in seeing if he got better in the paint offensively so that he can finish stronger and up his field goal percentage. I also envision him cutting down somewhat on the 3's to the point where he's more selective with them. He won't be jacking them up because I really think that year he shot over 40% from 3 is an exception, not what he can deliver on a consistent basis.

Look for Al to show some of that fire that was missing last year and if he does, you can be sure I'll be happy for him.

This play never got any highlight reel play or Sportscenter love. I have no idea why. Al throws it down over LeBron.