Order your tickets before 10am Wednesday!

Time for my favorite player on the Dubs this year, Stephen Jackson. 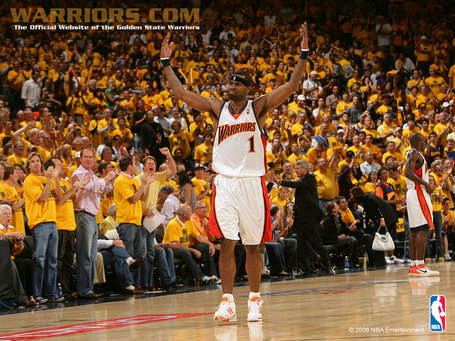 Brought along with Al Harrington, in what we here at GSoM consider the heist of the century, Jack was once considered a risky risky player to bring to the bay. He was a big part of the whole Ron Artest ordeal and best known for firing a gun outside of an Indiana strip club. He had a ring with the Spurs, but who really cared when he first came to the bay? Looked like a trouble soul and a guy that just needed to get his head up out of his you know what. Expectations were low - the hope was that he just wouldn't screw things up too much. We had DUNLEAVY before him, how much worse could it get?

Oh Stephen, how you proved everyone so so very wrong.

More after the jump!

Hit your thoughts, predictions, and grades in the comments!

He was a huge component of our 07 playoff run, in fact, Game 6 of the Mavs series was all him. Nothing, and i do mean NOTHING, will ever amount to the energy and passion that he brought to that game, that series, and the end of that season. As Warriors fans, we will always be in debt to this man for helping revive our lowly franchise and bringing life back to the basketball in the Bay.

But enough of that season, because as Atma likes to claim, we believe is dead. That time in Warriors history is over, and I think last year summed that up. But don't think for one second that Jack didn't put his heart into playing last year. He gave this team and this community everything and more. 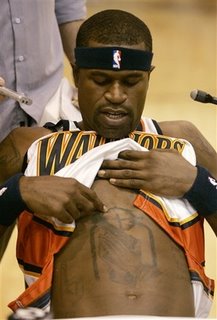 Webster's dictionary defines captain as "a person of importance or influence in a field." Remember that 7 game suspension at the beginning of the season? How many of those games did we win? 1? THAT'S the kind of impact he had with the team. Call it still being hungover from the playoffs, but the W's had no passion, no fire, and no belief without him. Sure, he wasn't jacking up open court 3's every 20 seconds, but without that, where was the fun?

Enter Stephen Jackson. In his first home game from the suspension, he lit up the Roaracle with 32 points, and helped lead us to a huge win against the Suns. Not bad for a first game back Stephen.

We all know the negatives associated with Stack Jack and we know pretty well that gut-wrenching, heart-stopping feeling that comes when he's running in the open court and pops a ridiculous three. Is it worth it? Of course it is when I find myself jumping out my seat screaming for more threes!

Player of the week honors. 40 minutes. 20 points per game. 4 board per game. 4 assists per game. AND he was the reason we won that game against the Lakers in LA.

What's even more worth noting about Stephen Jackson was his growth as more than a player in the league. After winning the NBA Community Assist Award for the month of March, I was pretty impressed to see his resume of community service for the work. He participated in the Silence the Violence rally where he spoke at Oakland Tech about the challenges he faced growing up, and teamed up with John Legend to bring us a LEGENDARY GSoM Night 4 as he showcased the Show Me Campaign to raise $50,000 for the organization. To end the month, he teamed up with Good Tidings Foundation to build a basketball court for the Omega Boys Club in San Francisco. Not enough? He finished the year by receiving Eighth Annual Angela and Chris Cohan Community Service Award. 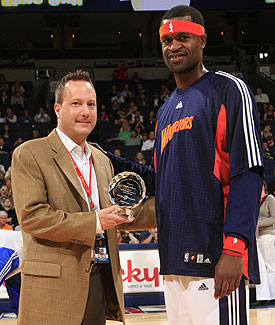 Now tell me this man doesn't deserve his props!

This man is our team now. With Baron gone, like it or not, he'll bring the leadership to the table. He's got a fiery soul, and yes, at times he'll be out of control, but as long as he only manages to pull 1 tech a game (he plays better with one in him anyway) he won't be a threat. Let's keep in mind that he's been shooting out of his mind this preseason, and he's still got the hot hand. I really like what he brings to his position (SF, no wait, SG, or maybe PG? Who really knows what he'll be playing come game time) but he's going to bring passion every time he steps on the court.

One for the old times...

I really don't care what kind of numbers he puts up (as long as it's not double digit turnovers) as long as he plays with his heart every game. This season might not end with another playoff run, but whatever. I'm just happy to have this guy on the team and I'm excited to see what kind of work he accomplishes within the community this season. 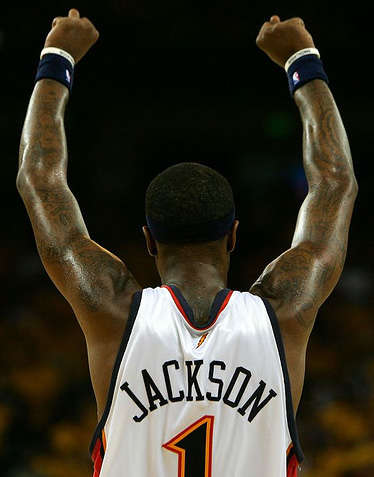