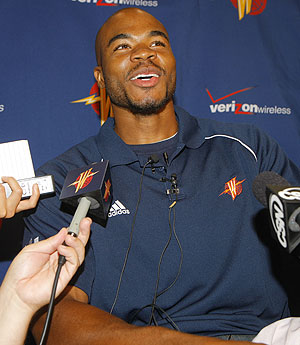 The Golden State Warriors' big free agent signing this offseason, Corey Maggette, is up next. 5 years, $50 million. I'm excited to see him play on the Warriors since I never liked watching him beat up the Warriors as a member of the Clippers. He always seemed to muscle his way into the lane or draw a ridiculous number of fouls which he in turn converted into made free throws. He clearly has a knack for scoring, let's just see if he can contribute in other ways as well.

2007-2008 Season Recap
Grade: B+
Last year was perhaps one Maggette's best years in his career. He played 70 games, scored 22.1 points per game, collected 5.6 rebounds per game, shot 9.7 free throws per game, and made a career best 1.1 3's per game. He's the model of consistency on the court. There's a reason Mullin and the Warriors gave him a big deal, they know exactly what they'll get from him and he can replace Baron's scoring.

Unfortunately, he's not a great defender, doesn't create shots for anyone but himself and hasn't proved to be a winner. Maggette is a solid addition to any team and he certainly produces

2008-2009 Prediction
Corey Maggette is Corey Maggette. What I mean by that is, whatever you saw in the past, is exactly what you'll get in the future. There's nothing Maggette is going to do this season that we can't already glean from his previous stats. He's going to shoot around 45%, score around 20 points per game, grab 5 rebounds, and get to the line a ridiculous number of times. It'll be something new for Warrior fans to see, a player who can get to the free throw line consistently.

And lastly, I can safely predict Maggette will not play a full season. He's never played 82 games in a season in his entire career. I figure he'll miss about 15 games - let's just hope he doesn't miss those games in the first 30 games because without him and Monta, this team is going to struggle to score.

This had to be the easiest prediction to write since Maggette is so predictable.