Share All sharing options for: Game #1: Warriors vs Hornets – A New Era 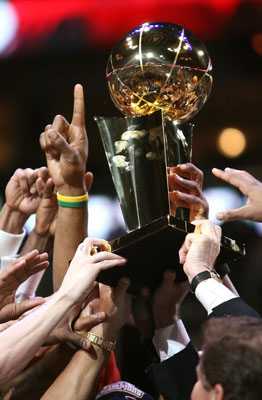 Finally! Game day is here. After watching other teams playing in the posteason, going through a wild ride of an offseason, trying to get excited about summer league, and covering the preseason games, the Golden State Warriors' 2008-2009 season kicks off tonight! Despite all of my pessimism towards the team's chances of success, I'm excited for another season of hoops. And I'm especially excited for GSOM Night 5 tonight. I hope to see lots of you around, wearing the Tony.psd designed Nellie shirts - this one's an instant classic.

As far as the game, hit the jump for some thoughts and predictions...

The Baron Davis Era officially ended in late June of this year when he opted out of his contract and shocked everyone by signing with the Clippers. Back in 2005, when Chris Mullin made that huge trade that brought the Warriors their first superstar in many, many years, it put this franchise back on the NBA map. There was a newfound respect for this team, this franchise, and this city. No longer were the Warriors a push over, they had someone who could take over a game and steal a win if you weren't careful. Baron Davis became the face of the franchise and overnight, us fans felt a new buzz, a new energy, a new hope. Baron would bring change. And change he did bring.

But Baron's gone now and it is now unclear who or what will define this franchise. This opening night game against one of the West's elite teams, the New Orleans Hornets, will be the jump off point for whatever era these next few years will be defined as.

The only thing that's clear to me is that something will define these next few years. Whether it's a good thing or bad thing, I have no idea. I'm nervous that we'll be going through another playoff dry spell. Hopefully that doesn't define these upcoming years. Here's who could define the franchise next.

Tonight's game is scary. Chris Paul vs DeMarcus Nelson or Marcus Williams scares me. Heck, Chris Paul vs them both at the same time scares me. David West scares me. Peja Stojakovic scares me. Adding James Posey scares me. The Hornets are better than last year. The Warriors? Not so much.

Here's what I am excited about for tonight. I'm excited to see Corey Maggette playing for the Warriors rather than tearing them up. Oddly, I'm excited to see Ronny Turiaf play. We finally have a legitimate banger inside to muscle up on the opposing bigs. I'm excited to see if Brandan Wright or Anthony Randolph will pan out and not be complete busts. And lastly, I'm excited to see how the two veterans, Stephen Jackson and Al Harrington respond to being the leaders of such a young team and what's looking to be a very difficult road to the playoffs.

Game 1, do the Warriors win?