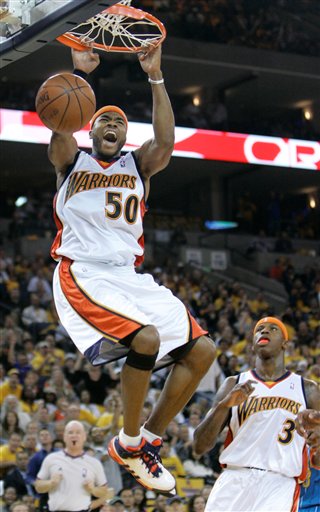 Welcome to the Bay!

The Golden State Warriors went toe to toe with the 2nd best team in the Western Conference and arguably 3rd best team in the league and nearly came away with a win. They matched the Hornets blow for blow all the way down to the wire and started off this season with a lot of excitement. Some questions were answered about whether or not this team would be competitive but there are lots of open questions about leadership, rotation, and big shot capability. Despite the loss, the Warriors showed they could hang with the elite teams - definitely encouraging for the fans.

The Warriors staged a nice comeback after the game seemed to be slipping away. After being down 6 with 5 minutes to go, with some nice defensive plays and key shots, they were able to grab the lead with 28 seconds left. But alas, the Hornets were just too good. Well, Chris Paul was just too good as he drove by Jax for the layup to take the lead for good.

Hit the jump for some more thoughts on the game...

Update: Also check out SB Nation's New Orleans Hornets blog , At The Hive for their recap. 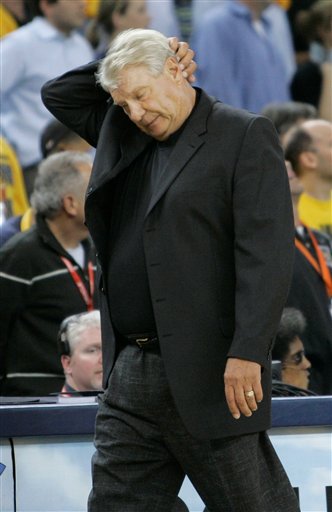 Lineup and Rotation
I guess we should have seen this coming. The combined minutes of Brandan Wright, Marco Belinelli, Anthony Randolph, and Marcus Williams were exactly 0. I didn't expect all 12 guys to hit the court, but I thought at least Wright would play. Perhaps it was a bad matchup for Wright to play against the bigger Tyson Chandler or the bull David West. Nellie talks about playing the young guys, but when it comes down to real game scenarios where he wants to win, those guys never touch the court.

Can you blame him? He's got his best guys out on the court in a close game. He simply can't afford to give up a bucket here or bucket there because of the young guys. You saw how quick he was to pull DeMarcus Nelson - he played just 2.5 minutes before being pulled and only 13 minutes overall.

Nellie is a creature of habit and trust. If he doesn't trust you, you won't play. So any thoughts of Wright or Belinelli starting or playing significant minutes can just go out the window. Nellie's going to go with who he trusts and that's basically 6 guys: Biedrins, Jackson, Maggette, Turiaf, Harrington, and Azubuike. Jax never left the floor tonight. Harrington played 42 minutes, Kelenna played 43 minutes, and had Biedrins not fouled out, you can bet he'd be playing around 33 minutes. If this is the lineup Nellie uses, it'll be interesting because he has to go big with it. Quite often, Biedrins and Turiaf were on the court at the same time with Al and Jax. The problem is these guys cannot keep up these minutes the entire season. In fact, they probably can't keep up those minutes even until Monta gets back. There needs to be a solution for establishing the bench and getting these guys breaks.

Point Problems
There are going to be some serious problems at the point guard position if Mullin doesn't go swing a trade for someone who can actually play point. I know Nelson is a rookie, but he just wasn't very good tonight. Nellie gave him the opportunity to play, but he didn't deliver. For someone who's supposed to be a defensive stopper, he didn't do a lot of stopping. First off, Jax had to guard Chris Paul and when Nelson guarded Peja, he got shot over too easily.

Okay, so why not try CJ or Marcus Williams? Well CJ played a couple minutes and was ineffective. Marcus Williams is in the doghouse and I don't expect him to get out anytime soon.

So, Jax had to run the point nearly the entire night with Azubuike sprinkling in the ball handling duties. Not the ideal situation. There were occasions when the two of them had trouble bringing the ball up against pressure by the Hornets guards. Even on defensive rebounds, when the Warriors want to get out and run, there's no point guard who's going to go retrieve the ball and push the break. So they end up either bringing the ball up themselves or looking to push with someone who's decision making skills in the open court are below average.

Unless Mullin brings someone in who can play the point, there will be a point by committee and eventually teams will figure out how to pressure the Warriors ballhandlers into mistakes. 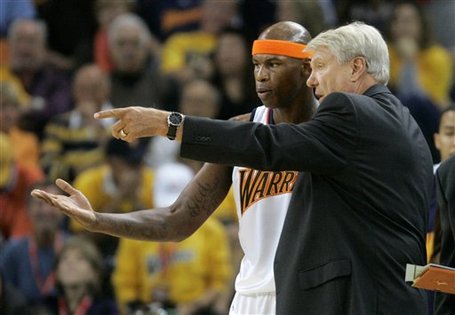 Yea, we're trading you for that guy in the first row.

Who's the Man?
In critical possessions, I never got the sense that any of the guys on the court wanted the ball. It's a huge difference from last year where we knew Baron was going to get the ball and control the game. This year, does the ball go to Jax? Maggette? Al? Tonight there was no sense of anyone on the team where I felt, this guy should have the ball. Someone will have to establish themselves as the guy who can get you a bucket when you need one. When the opposing team is making a big run, who's the run stopper? When the shot clock is winding down, where does the ball go? When the quarter is about to end, who takes the shot? When the game is on the line, who can you count on to take a shot? I just don't know right now.

Jackson has taken on that role in the past but without Monta and Baron to balance the floor more, he seemed to have a little trouble establishing himself as the man.

This is all evidenced by the Warriors' last few possessions. It was just awful. Turnover, near turnover, blocked shot, made bucket, and a few misses. Didn't it seem like they had never practiced an out of bounds play before? Did Nellie draw up these plays? That one where DeMarcus caught the ball at the top of the key, drove right on Paul, jumped in the air like he was going to take a shot and then heaved a pass along the baseline which got deflected out of bounds? That was an excellent possession. First, where were Jax and Maggette? Go get the ball. Second, why was DeMarcus even in the game? You ride a certain 6 guys the entire game and then in the final minute you get the ball to a guy who didn't do much the entire game? Hmmmm... 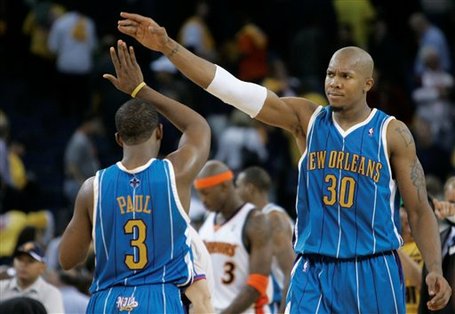 Pick and Roll, Pick and Roll
The Hornets were precise tonight running the pick and roll. Everyone knows the Warriors automatically switch on the pick and roll, so the Hornets decided to take advantage. They'd set a screen for Chris Paul with Tyson Chandler and since the Warriors switch everything, now Andris Biedrins is guarding Chris Paul. That's a problem. And if it wasn't Paul hitting a mid-range jumper it was David West. He must have hit 4 or 5 shots in a row in that 4th quarter. The guy is a bull on the inside but then uses that fadeaway jumper to create extra space to drop his sweet looking shot.

The other thing about the Hornets tonight was that they're not nearly as good when only one of Paul or West is in the game. The Warriors were able to build an 11 point lead in the 2nd quarter with Paul out of the game. When Byron Scott decided to play both of them, the Hornets made a huge push to take the lead in the final seconds before the half. Only DeMarcus's runner at the buzzer kept the Warriors in the lead. Apparently, as Paul and West go, so go the Hornets. Figure out a way to get one of them in foul trouble, and you have a chance of taking out the mighty Hornets.

Some Random Thoughts
1) Biedrins looked improved today vs last year. He had this one move where he got the ball in the post against Chandler, he spun right into Chandler's chest which pushed him back a bit and then Biedrins went right up over him. Basically he took the ball up strong on a power move - something I've never seen before from him. He looked a little smoother today and is still quite agile with nice hands.

2) Turiaf didn't score but he contributed in other ways. He hustled no doubt and goes after every loose ball. He made some forgettable plays, but he's got an excellent energy to him that the Warriors need right now.

3) Jax is going to shoot and shoot and shoot. I was telling my buddy at the game that Jax is the first option on offense. He's also the 2nd option and the 3rd. Maggette is a distant 4th.

4) Booing Al Harrington? I understand why people would boo him but he's just frustrated with his role and has been for over a year now. I don't see anything wrong with him finally going to the media to vent his frustration. The problem is, he's just not that good right now. I don't think he's a spot up 3 point shooter, I think he's better suited for out-quicking the opposing big man and getting in the lane. He's just got to learn how to finish. The Al of this game was no different than the Al of last year. He still played hard, but his shots just didn't fall.

5) I really liked what Kelenna brought to the table today. He went right at Paul a few times and tried to overpower him. He's going to get some significant playing time this year and I expect that he'll do well. 1 issue with him tonight: on the two shots he missed in the 4th, both misses were the result of him fading away on his jumper. If he had made those 2 shots, this might be a Warriors win instead of a loss.

GSOM Night 5
Tony dropped an awesome t-shirt. It looked even better in person than it did online. It was just too bad it got drowned out with the generic yellow shirt the Warriors handed out. The Nellie image really represented his character well. I heard more than a few times, "oooh I want that Nellie shirt".

Where Were the Fans?
First off, the arena wasn't even sold out tonight. The Warriors are just pricing their own fans out of the games. I mean at the cheapest, it was $40 for a discounted GSOM Night 5 ticket. Our first GSOM Night 1.5 years ago, the exact same tickets were $20. Given the state of the team and the price of the tickets, I don't expect too many sellouts.

My big question about the fans was why were people leaving in the final minute after Al missed the 3 and Peja went to the line for 2 free throws? It's still a one possession game no matter how many he makes! Stephen Jackson is known for hitting clutch 3's. That was disgusting to me. Why do you even go to the game if you're not willing to wait out the extra few possessions to see if someone hits a big shot? Lame.

Tonight's Warrior Wonder is the new guy, Corey Maggette. He shot ridiculously well from the field (8-11) and the line (9-10). Throw in 8 boards and a couple three's and I was impressed with how well he played. He attacked the rim and even threw his body around on some hustle plays. He gets my vote for WW.