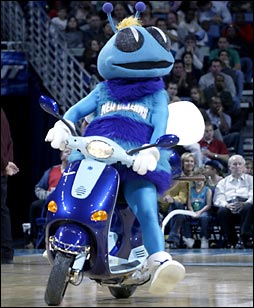 Well at least we don't have this as our mascot!

Not much to be excited about these days in the Bay Area. Our Niners are a Cinderella team in a Twilight Zone episode while our Raiders are lead by the Grim Reaper himself, so they can't be any better.

No, now we can all jump up for joy for the NBA preseason is about to begin! Our beloved Warriors will face off against the Hornets today at 4pm. Am I excited? Heck yea! We don't have Baron, we don't have Ellis ... but who cares. It's fun going back to being mediocre. That way I can dust off my sarcasm and cynicism.

But one shining star I am excited to see is Corey Maggette. We'll be talking about him all season, but I've been a fan of his since he joined the league. Now I'm excited to see him in a Warrior outfit. I'm also anxious to see how much Randolph, Wright and Beans have progressed on the off season. I expect big things this year.

They can take the "believe" away from our franchise ... but they'll never take it away from me. I do believe in this upcoming season. I really do!

YaoButta's Predictions:
- Hornets up by 20 points in first half but Warriors win game by 4.
- Beans and Wright both collect double doubles.
- Ellis sits on the sidelines wearing an over sized polo and hat.
- We have 27 comments tonight =)