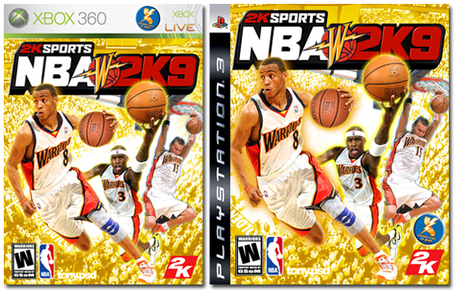 Exclusive NBA 2K9 variant covers  for the XBOX 360 and PS3 courtesy of Tony.psd and GSoM!

It's become a tradition now here at GSoM to remix everyone's favorite sports title NBA 2K9 for the Xbox 360 and Sony Playstation 3. No disrespect to KG for making the cover, but this is my chance to give back a little extra something to the fans of Golden State and gamers down with 2K Sports using my nifty Photoshop skills. Last season I went all out with a new alternate cover, side bars and back page. This year, since I'm working multiple design projects with various clients, I had to focus mainly on the cover.

If you want to use it for your own copy, simply download the file below and print it to your deskjet printer (or FedEx Kinko's!). The file size is set to dvd packaging standards and should print on 8.5x11 paper. As you know, high resolution pics of our players are hard to come by on the web so I respectively toyed around with the wallpaper images on the Warriors website. (This cover is for promotional use only)

As for the cover concept, from the start, I wanted Monta featured on the cover. I actually wanted to feature some of our new players as well, but my resources were limited in finding legitimate pics. So I went with the 3 guys I look forward to watching every game. Although Jackson isn't featured on the cover, I wanted to make more use of Harrington since I didn't use him too much last season. Also, I wanted to do a jam cover of players instead of a single icon for a change. I also dig the "We believe" Yellow in the backdrop... it's very Golden State!

The NBA 2K series has been more than just a game, it's a lifestyle for me and my friends. While I don't play it much online anymore, for the past 6 years, my friends and I prefer battling at each other's house over some cold brews, tasty pizzas and good company. Which is why it's so hard for us to make the switch over to NBA Live. Enjoy!