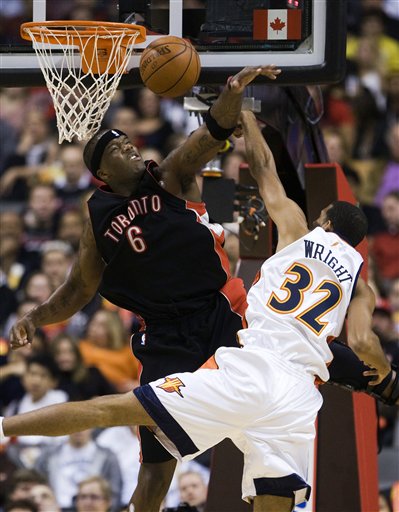 Here's your recap - that ending sucked.  Sucked a lot.  Sucked so much that I wish more kids came by house bugging me for candy so I couldn't witness the last two minutes and the OT of the game.  I will say this Game 2, and I'll probably say this through Game 82, these are the worst kind of losses.

On Wednesday, we all witnessed a great heart breaker as the Warriors kept up and contended with the 3rd best team in the league.  So we all figured, "Hey, it's the Raptors.  They've got some talent, but after that uplifting performance on Wednesday, we got this, right?"

Hit the jump to hear my thoughts on the game.

Who in the world saw this one coming?  Down by double digits in the 2nd quarter, Nellie decided to reach into his bag o' magic tricks and pull out the tallest lineup he possibly could - Jack, Maggs, Harrington, Turiaf, and Beans.  For the rest of the half, things were magical  - it was score after score for the Dubs.  Going into the half only trailing by 2 was caused a huge shift in the momentum, and confidence in the Tall Ball gameplan.  Everyone says Nellie always wants to play the small guys, but hey, we all witnessed it tonight.  It's about who's going to be the best for the night.  Say what you want about his coaching style, but as Barnett put it, "There's a reason he's the second most winningest coach in the NBA."

I cannot and will not get enough of this combo throughout the year.  The two of these guys played extremely well together and earned their minutes.  Andris went off against the Raptors going 8-13, pulling in 17 points, and taking down 13 boards.  He made excellent cuts to the basket and created space around the floor for others to hit the outside shots.  Andris is looking much more confident than he was last year, and has the fire to actually come out every night and be productive.  The Free Throw form is still ugly as all heck, but good job tonight. 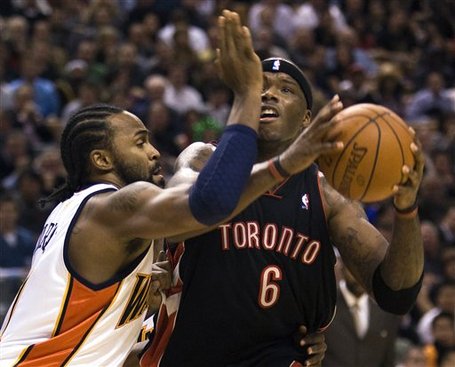 Ronny Turiaf - can't get enough of this guy.  Although his stat line doesn't look it (2-4, 4 points, 5 blocks, 5 boards), Turiaf was AN ABSOLUTE BEAST tonight.  His presence and energy was enough to warrant him a full second half, well, at least til he fouled out.  The blocks were crucial, and you could easily witness this guy hustling on every play.  Yes, a lot of those fouls were dumb, but they more than made up for the boxing out that he did on the Raptors Bigs and helped enable us to beat them 46 to 36 on Rebounds.  Everything was going quite peachy until he fouled out...

34 minutes and 5 points?  Really man?  Talk about an off night.  I was expecting a huge night from O'Neal, but he came up short.  Well, all except that killer block on Brandan Wright.

So we got to see a bit of the kid, and it wasn't great.  8 minutes and 4 points.  The guy was trying hard but it looked to me that he just lost it after Jermaine destroyed him on an attempted dunk.  Oh well, there's always tomorrow...

As for the other young'ns...didn't get to see much of that.  DeMarcus was mediocre at best.  Guess he needs more time baking in the PG oven.

The Warrior Killers of the Night - The Last 2 Minutes

Man, I wish I could say this was Chris Bosh (31 points) or Andrea Bargnani (19 points) but as great as the two of them were, they weren't the reason we got destroyed.  But man, Chris Bosh showed us some good reasons of why he deserved to be on the "Redeem Team" this year...

Al Harrington - Yeah he's under this category.  Amazing game, yes - 26 points, 50% on 3 pointers, and hey, even made the game-winning shot in the last minute.  Wait, what?  That wasn't the game winning shot?  Oh right, that's cause he (and the other two guys on this list) were trying to play "hero" at the end of the game and pull in the game winning shot.  I'm pretty sure the smart thing to do when you have the lead under two minutes is to hold the ball and not take dumb shots...but hey, you proved me wrong Al!

Stephen Jackson - Same goes for you buddy.  Stop jacking up ridiculous three's WHEN WE HAVE A SMALL LEAD.  I don't care how you play for 46 minutes if you screw up the last 2 minutes and make us lose.  That's not being a leader.

Corey Maggette - What are you doing?  Really, what are you doing?  4-15?  Maggs just couldn't get into rhythm tonight until late in the game when he realized that Tall Ball entailed him abusing the heck out of Kapono.  Well, that's great, but that still doesn't make up for the awful shot selection and wanna-be heroic moves.   And what came of that last shot of the game?  ABSOLUTELY NOTHING

A complete waste of 5 minutes.  That's all I got. 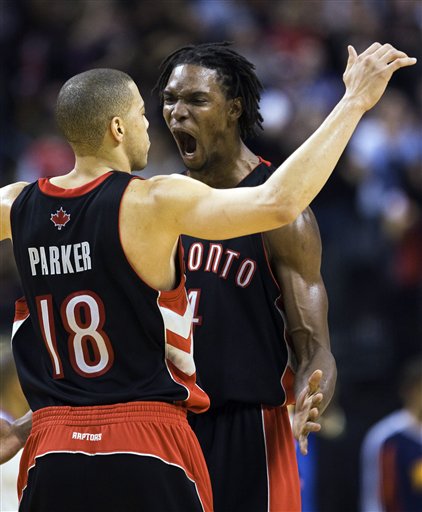 Basically, I'm completely frustrated with this repeat of a game.  I'm down for playing hard and putting heart into the game, which the Dubs did, but the collapse was due to COSTLY mental mistakes.  Not wasting shot clock under two minutes with the lead is absolutely unforgiveable.  ESPECIALLY when they got two offensive boards off of one play.

I seriously hope Nellie's yelling at everyone the whole plane ride to New Jersey, cause this kind of false hope if terrible for my blood pressure...

Oh yeah, and I refuse to keep using my high quality humor if these heart breakers keep happening.

Kelenna Azu-BOO-ke!  He came in, slashed around the court, and pulled down 15 points and 4 assists.  He's really developing into his own identity and I'm interested to see the type of mintues he gets in the next few games.  Nellie obviously trusts this guy, so only time will tell when he gets the starting position.  And, he looked amazing playing point during our Tall Ball segment!