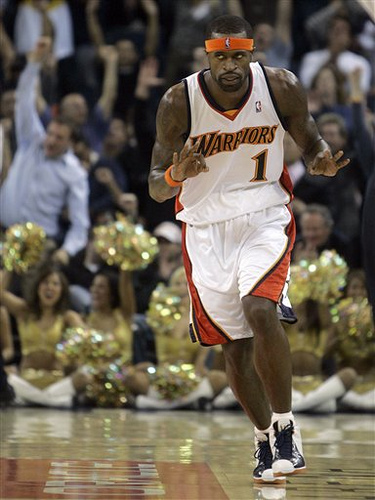 This was a crazy up and down game, a roller coaster ride of a game. With the Golden State Warriors and Minnesota Timberwolves being two young teams, that's to be expected but I might need some Rolaids if this continues the entire season. Guess who the Rolaids man was tonight? The veteran, Stephen Jackson.

In the beginning of the first quarter the Timberwolves looked like the dominant team only to have the lackluster Warriors turn it around, show some life and tie the game at the end of 1. Then at the start of the 3rd quarter  the Warriors looked like the dominant team only to have the Timberwolves come back and take the lead. They held that lead all the way until about 4 minutes left in the game. All of a sudden, the Twolves couldn't hit a shot! The starters were back in and Nellie made the proper adjustments on defense to prevent Al Jefferson from continuing his dominance in the paint. The Warriors closed the 4th with a 9-0 run to send the game into OT.

After a thrilling win, I feel like being optimistic again, but then I remember that it took a big comeback and overtime to overcome one of the worst teams in the league. Winning is fun, but let's not get carried away. The Warriors still have some major flaws. 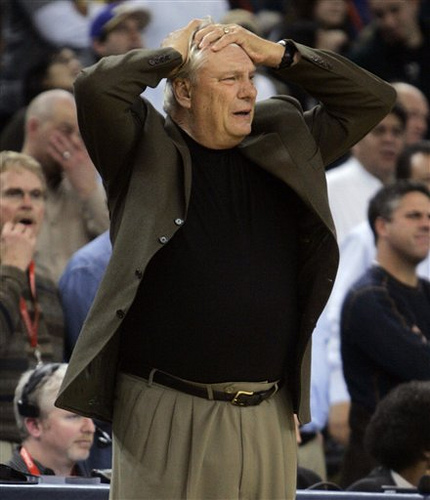 A Different Lineup Every Night
For awhile, probably until Monta rolls back, you can expect the lineup maneuverings to be different every night. Nellie's not going to have a set rotation. Outside of Jack, Beans, and Buike, he's going to play the rest of the guys using his gut, his mighty gut. If he doesn't like how a certain guy is playing, he'll be quick to pull a guy and try someone else. If someone is playing well, he'll get another shot in the 2nd half. Because the young guys aren't consistent and he's trying to win games, he's going to play whoever is playing well. You saw that with Morrow and Randolph tonight. Both played well in the first half so they got early minutes in the second half. Unfortunately, they didn't produce so they got to ride the pine the rest of the game. Once Maggette comes back, the lineup shifting will slow down, but you can still expect to see that a previous good game won't have much of an effect on their playing time in the current game. 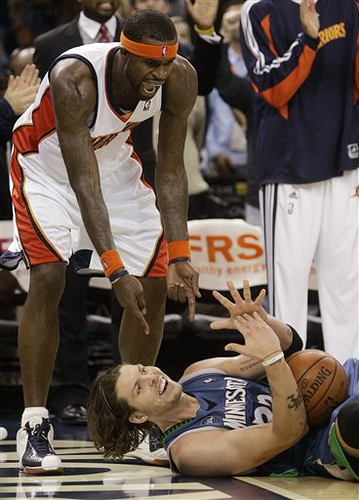 You can't call timeout when you're out of bounds

Turnovers in the 4th
Let's see, you're down by 4 going into the 4th quarter. What's one of the worst things you can do? Give the ball away. 8 turnovers in the 4th quarter?! Up until that point they took pretty good care of the ball with just 9 turnovers. Point guard anyone? Sorry, CJ Watson is doing an admirable job, but he's no long term solution. After a few years of watching Baron, it's really hard to watch this team not have a designated ball handler. When the team needs to just bring the ball up the court, sometimes it's a chore. Those 8 turnovers in the 4th are a direct result of not having a true ballhandler and creator. I'm not even convinced Monta, when he comes back, is that guy.

Biedrins
When your off game is a 13 point, 15 rebound game, you know something is going right this year. Despite the nice overall numbers, this just wasn't a pretty game for Biedrins. He racked up 3 moving screens, 4 turnovers, 3-9 shooting and was part of the reason Jefferson was scoring at will. But he came up big in the closing minutes of the 4th by helping shut down Jefferson and get that comeback win.

The Wright Left Hook
Unless you're 8 feet tall, you're not blocking that little jump hook by Mr Wright. He had it falling tonight, I think all 4 of his field goals were scored using that hook. It's not just that little jump hook he had going tonight, he was hustling on D as well. He didn't have any blocks but he sure changed a bunch of shots and is starting to look more and more confident out there. I'm pretty sure he wouldn't be playing much if Nellie has another option, but Wright's making the most of his time. He's playing big crunch time minutes which can only help him develop. He's still extremely raw, but I'm sure we'll see a nice evolution quickly. He's already doing well on the offensive glass, but I'm sure we're going to see him incorporate that baby hook more and more into his arsenal and also become a better defender.

The Master Plan
We got a glimpse of Chris Mullin's master plan for the future of the Golden State Warriors. Tonight, we saw the first sighting of the three-pronged, left-handed, loooooong armed frontcourt. With Andris Biedrins at center, Brandan Wright at power forward, and Anthony Randolph at small forward, the Warriors had some ridiculous length and youth out there. It was fun to see these 3 pogo sticks bouncing up and down the court trying to grab every rebound and jumping as high as they could to swat every shot. When Maggette comes back it will be interesting to see what happens. Randolph has played well enough to earn some more minutes but he plays the same position as Maggs. The lineup I'd like to see get some burn because it looks like fun, The Master Plan + Jax at the 1 and Maggs at the 2 with Randolph sharing PG duties.

Another Barnettism: "Use the rim to protect your shot"
It's time to add one more Barnettism to my list. Simply because he drilled it into the telecast about 53 times, use the rim to protect your layup. So and so player should have gone up on the other side of the rim to prevent his shot from getting blocked. This is why I love JB, he hammers home a point and as an observer you can look for it later in the game. Basically, he helps slow the game down for the audience so that if you care, you can spot it yourself.

Another great (and corny) Barnett quote but not a Barnettism, "They threw him (Brandan Wright) to the Wolves." Gotta love Barnett.

The Randoms
Sadly, fan favorite Rob Kurz did not enter the game tonight. My prediction of "Don Nelson and a Monta Ellis suspension: Where Rob Kurz happens" did not come true. I'm utterly disappointed.

That other fan favorite for no explicable reason, Marco Belinelli, did happen to get in the game for 5 minutes and actually played well. He knocked down a couple 3's and played good defense. BUT, he still should not be getting more PT until he can consistently earn those 5 minutes. In fact, I'd rather see...

...the other undrafted rookie on the team, Anthony Morrow. He played well in the first half as he knocked down some nice shots and showed a lot of confidence in his shot. He played well enough that Nellie chose him as the first reserve off the bench in the 2nd half. Unfortunately, he didn't deliver the goods and after a few minutes was never heard from again.

The Open Thread Comments
Lastly, I gotta give props to the commenters in the open thread. I can't believe there are over 800 comments in an open thread against the Minnesota Timberwolves. Let me repeat that, THE MINNESOTA TIMBERWOLVES. These are true fans. We might have to start opening up a second open thread if y'all get too crazy in the first. Anyways, props to the commenters and the people who've read all those comments. Keep up the passion.

Captain Jack. He brought the Warriors back in the 1st quarter after a horrendous start and closed the game out in OT with a jumper for the first points, a big 3, and caused a turnover on the Wolves final possession. Whoever guessed that he would score more points than shots taken, you win. 30 points on 21 shots. And surprisingly, he made more than he missed, the Stack Jack attack.