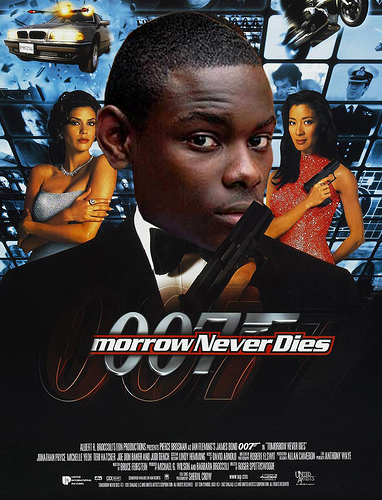 Do we have a new hero in town? – Posted by Sleepy Freud

This game had everything, a heated showdown with drama, excitement and anticipation. The Warriors and Clippers switched their best players to the other team in the offseason so I marked it on my calendar 4 months ago to see who would have benefited from the swap. But in the end who would have thought a no name rookie would steal the show and make history?

Thanks to our GSoM community and their posts last night, we surpassed 800 comments and got a great sense of the game if you didn't watch. Let's take a look: 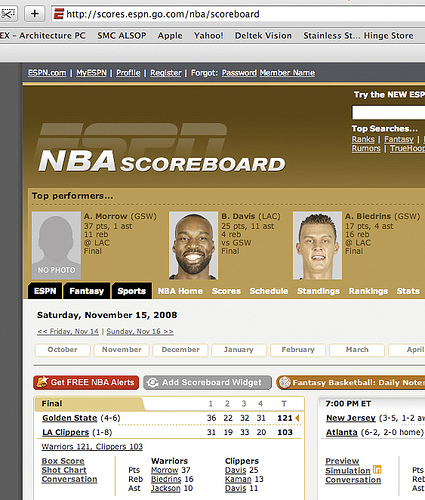 Sleepy had the best post of the night … Morrow doesn’t even have a pic!

Let's just dive right into this shall we? Who is Anthony Morrow? I had no clue until today. Turns out he's an undrafted Warrior who hardly gets off the bench and was blessed with the opportunity to start against the Clippers.

This matchup was supposed to be a showdown between Baron Davis and Corey Maggette. This was supposed to be our chance to see who got the better end of the swap. But in the end they were overshadowed by Morrow. I'm not even sure how Nellie had the thought process to start this guy. In the 4 NBA games he was active for, he got to play in 3 of them. He averaged playing 13 minutes and averaged 8 points. I guess that's a good ratio of playing time vs scoring but I was still surprised when Nellie put him in the starting lineup against the Clippers (trust me I was all for it given I'm not the biggest CJ fan!). And this is why Nellie is coach and I'm a blogger. Morrow was amazing. He played as though he was a veteran with confidence and swagger. He created plays for himself and shot an incredible 15 of 20 with 4 of 5 from deep. Morrow made NBA history for the first undrafted NBA player to ever score 37 points in a game. He also pulled down 11 rebounds and for his first start as a Warrior, I'm hoping this is something big to come.

Nellie's comments after the game put it best. From ESPN:

"This was one of the most exciting things that I can remember in a long, long time," Nelson said. "I've been in the league 30 years, and I've never seen a performance like that from a guy that got his first opportunity to start and play consistent minutes.

"He had the game of a lifetime, and I hope there's a lot more like that in him," Nelson added. "He's improved so much in the two months of training camp that we just finally decided to make the move and start playing the kid and bring him along. He got his opportunity today, and I'm so proud of him and so happy for him."

Thank you bayareaballa for finding this!

Stephen Jackson and Andris Biendrins had a good night to help Morrow along the way. Stephen scored 20 but more importantly had 10 assists and Biens continued his double double tear with 17 points and 16 rebounds. But with all eyes on Corey Maggette he was only able to muster up 17 points and 5 rebounds which is ok because he knew when it was time to step back and give the hot shooter a chance to shine.

Baron did what I thought he would do. He made me miss his talent but he just tried too hard. He scored 25 points and 11 assists but shot 36% from the field and only 30% from behind the arc. The whole time I was imagining what we'd look like if we still had him on our team, but I'm happy he was able to get paid (actually no not really). These Clippers are bad and though I'm still upset he's playing for them, I feel bad they are at the bottom of the NBA right now. With all that talent on that team it just makes no sense.

Anthony Randolph. No I'm just playing. Will the real Anthony please stand up!