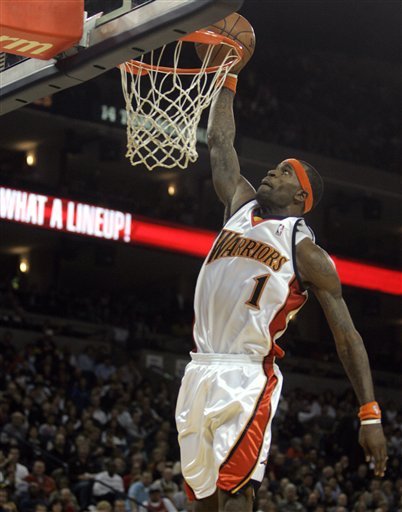 Back and forth, back and forth this game went. The Golden State Warriors hung in there and kept the Chicago Bulls close the entire game. It never got far enough away from the Warriors, but in the end they just didn't have enough stops to pull out a win.

Shorthanded Lineup
Kelenna Azubuike was injured tonight so someone else had to step up to replace his production. Anthony Morrow and CJ Watson would get more minutes as would Marco Belinelli and Marcus Williams. Consider the Warriors going from Baron and Monta last year to CJ and Morrow this year and yet they're hanging tough in games and keeping it interesting. It's a testament to those guys' talents, Nellie's coaching ability and schemes, and the improved play of the 3 veterans, ^^^^, Corey Maggette, and Stephen Jackson.

Hit the jump for thoughts on the game...

The Vets
You know who really stepped up thought? The three veterans mentioned earlier. It was on their shoulders tonight. If the Warriors were going to win, then these 3 would have to play above average. They played well enough, but just wouldn't let the Bulls pull away. ^^^^ had a big game with his 10-16 shooting good for 23 points and 10 boards. More on him later. Corey Maggette also had a great game as he kept the Warriors close with his barrage of free throws and strong drives to the hoop. And of course there was the captain, Stephen Jackson absolutely shooting the lights out going 13-16 at one point for 32 points. My gripe with Jax tonight? The turnovers, all 8 of them! In fact the majority of them came in the 4th quarter with him throwing some extremely poor passes, some out of bounds and some to the other team. Overall though, the three of them played extremely well tonight and if any one of them didn't play as well, this would have been a blowout.

Best Young Player on the Warriors?
I'm talking about 3 years or less of experience. I know this is odd, but I'm going with Anthony Randolph. I know Morrow has had the 2 big games but tonight without his shot falling, he didn't really give the Warriors much else. He had 3 steals but he seemed to get scored on often and has a lot to learn about defense. On the other hand, everytime I see Randolph play (which hasn't been much) he's doing something to benefit the team. He can score but he's always challenging shots, grabbing boards, and can play some point forward. Oh yea, did you see that block on the breakaway dunk in the 4th? Yea it came off of a stupid pass he made but damn that was impressive. Later this year, I hope he gets more and more PT because he looks like he can be special. What I like the most about him is his presence. He plays with a certain swagger and has style. He's got that air of confidence about him where he knows he's good. 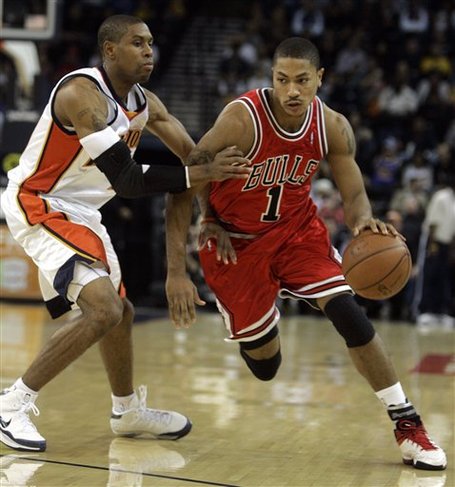 Best Young Player in the League?
I'm not going to get carried away because it's not Derrick Rose, but by the end of the year he's going to make a serious challenge for that title. Wow. What a 2nd half. I just sat there shaking my head in disbelief. For a rookie to lead his team like he did in the 2nd half is very impressive. He made shot after shot to keep the Warriors at bay. Nobody could guard him. Play too close to him and he drives right around you. He's got such great body control that when he drives he can finish around and over defenders. Play off of him to respect his drive and he uses that pullup J to kill you. What's even more impressive is that with that pullup J he can go either left or right and it looks just as smooth both ways. Double him and he finds the open man for the jumper. I was expecting him to be good, but man, that 2nd half was just ridiculous. Special. Unstoppable. 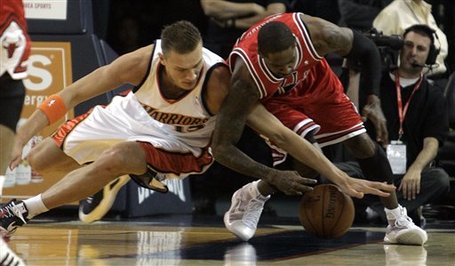 Biedrins Maturity on Offense
I really liked what I saw from Biedrins tonight offensively. Not because it was anything spectacular but because you can tell he's learning how to play. Early on, it looked like he had trouble on the low block against Gooden because of Gooden's strength and quickness. Biedrins tried to go around him but seemed to have trouble because Gooden would get physical with him. So what did Biedrins do the rest of the game? He went right at Gooden or whoever else was guarding him. He dipped his shoulder a couple times right into the chest of the defender and went up and over him. Other times he went strong to the hole off of a dribble drive and got layups out of it. And of course he ended up with another double double finishing with 23 points and 10 boards.

Player Observations
Marco: I'm not a big fan of his because he usually plays pretty soft and unsure of himself but today he played well. It started out poorly with a turnover and getting blocked, but after that he made a bunch of hustle plays and nice passes. I've been saying this all along, he's a very good shooter when he sets his feet properly, squares his shoulders and then goes up. The problem is he often takes off balance shots. If he can get he fundamentals down and keeps up his hustle, he's got a chance to earn some minutes when Kelenna and Monta come back.

Marcus Williams: What a waste. Nellie gave him quality minutes in the first quarter and he just didn't capitalize. He's got some nice handles and is a big guard, but he couldn't make a free throw or a jump shot and looked like he didn't belong out there.

Larry Hughes: Remember him? Well he makes 1 three pointer this entire season and then hits 5 tonight?! Are you kidding me? Ugh. He was their leading scorer tonight with 26 points. Larry comes back to haunt his old team at home.

Nocioni: What an annoying player. But I'll at least give him one thing, he plays tough and goes all out all the time. He was always in Jackson's grill and fought for every rebound.

Drew Gooden: This Bay Area product looked real smooth tonight. Lots of post up scoring and threw his weight around down low. His 16 boards was a huge reason for the Bulls' win tonight.

Line of the Night
Jim Barnett: "Sefolosha is really giving Jackson trouble tonight"
My girl sitting next to me: "What's that? Some foot disease?"
Me: "..."

He's really improved his defense to the point that you can call him a good defender. He stayed with his man tonight, moved his feet and challenged shots. Offensively he kept the Warriors in the game in the 3rd quarter when the Bulls couldn't miss.