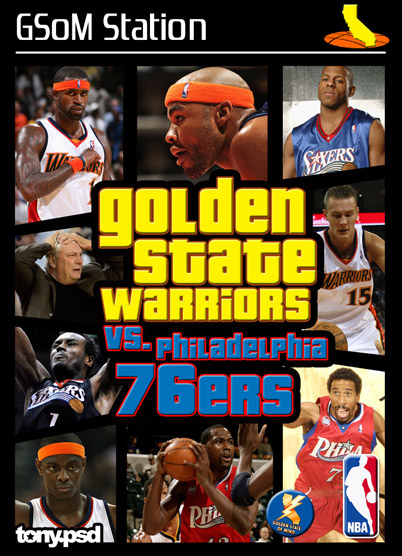 My first "Open Thread" and the game isn't even televised in the Bay Area! We're 12 games into the season and so far, things have been pretty exciting. Now the real test begins. The Dubs start a 9 game stretch where 8 games are on the road. They go head to head with some pretty tough competition, Philly, Boston, Cleveland, Houston and San Antonio. (to name a few)

Is help on the way? You bet! Jamal Crawford from The New York Knicks is coming to town, and while I haven't seen any links yet stating that he's starting against the 76ers, Jamal's another fine addition to Nellie's already deep selection of guards. A number of our young prospects are looking real sharp and stepping up as well, The Anthony's (Randolph and Morrow) are showing some great production in minutes while Marco Belinelli is sort of coming alive. This road trip should be a great test for him if he gets minutes and uses them well. (The same goes for Brandon Wright.) Hopefully Azubuike will be back as well and the return of Monta is just around the corner. It'll be a whole new game from there!

The 76ers (Liberty Ballers) just came off an important win against Elton Brand's old team, the Clippers. Andre Iguodala played some great basketball that night dropping 14 points and delivering 12 assists. Andre Miller and Elton Brand stepped their game up as well and sent The Clippers home with a loss. I'm interested in seeing how our young guys match up against the 76ers. Our bench is hungry for minutes and we'll certainly see a little bit of everything from our bench. The good, the bad and the ugly! Everybody's gonna need to shoulder the weight as well. Captain Jack is gonna need to decrease his turnovers. Biedrins should remain dominant under the boards and Maggette needs to chuck in those points instead of bricking them! This road trip is going to be a major test for our team, lets get as many wins as we can Dubz!

• Randolf gets more minutes and produces some solid numbers.