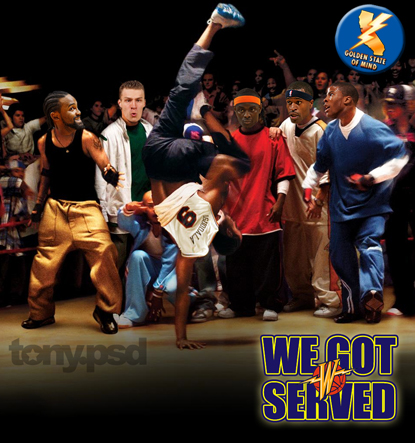 Andre: You're just mad... 'cause tonight You suckas got served!

Yep, if you compared this game to a dance crew battle in a rec gym... We got served! We almost had them, but "almost" doesn't bring you a win. I really wanted the Warriors to take this one. A come from behind victory would have been a great way to start the road trip (and my first recap, lol). But things just had to get ugly with the Warriors in the first half. Kudos to the 76ers, they're a great team but for us W's,  we gotta get some more wins on the board. 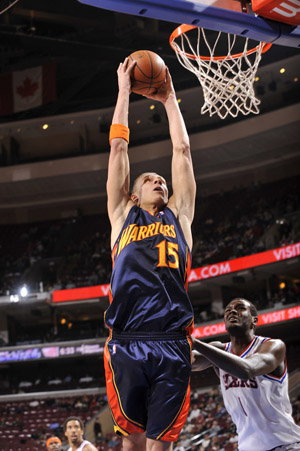 Oh you wanted fries with that?! You know how we do!

First off, at least I got to see a "block party" go down in Philly - 13 blocks total! That's good for most in the NBA this season. Check it out, "Tender" Ronny leading the team with 5 blocks, Randolph and Biedrins with 2, and Azubuike, Jackson, Maggette and Wright with 1 a piece. That right there is the big difference in defense compared to previous seasons.

Having Azubuike back in the rotation from injury was a difference maker compared to last Friday's game. Kelenna, the Warriors leading scorer, contributed 16 points, 5 rebounds and 2 assists.

Anthony Randolph had some decent numbers on the floor, 28 minutes, 6 points, 4 rebounds and 2 blocked shots while Brandon Wright had 10 points but only 2 rebounds. It's all part of learning the game for these young guys.

Lastly, coming back from being down 22 points in the second half was pretty hype. You can thank much of the bench for that and a key 3-pointer by Anthony Morrow with 6:32 left in the fourth. Like I said, a comeback win would have been the icing on my cake. 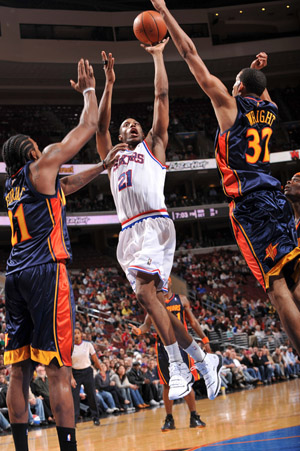 You weren't invited to the Block Party... he must be with the DJ...

Philly's starters were simply too good for the Warriors tonight. Elton Brand found his rhythm and stomped the yard on us to the tune of 23 points and 12 rebounds. Dalembert's 16 rebounds were also major contributions in the Sixers win as they helped swing the rebounding edge in Philly's favor 54-38. Andre Iguodala and Thaddeus Young did their damage as well with both scoring double digit points. Philly's hustle in the first combined with the Warriors lack of it, just goes to show that there are no free rides in the NBA (well maybe Starbury's situation.

On the Warriors' end, we didn't see enough of Anthony Morrow shooting from downtown, he was only 2-6 shooting. More Morrow!

The 18 Warrior turnovers killed any chance of securing a victory today. But on the bright side, at least Jackson only had 4 turnovers tonight!

Had to be the 1st quarter...we were held to 17 points which was the lowest this season. Having our superstars (Jackson and Maggette) shoot a combined 7-24 is unbearable. (Jackson was 1-7 in the 3 point line).  We just need to have better shot selection. In the end, it was the Sixers defensive plays that gave them the victory. A loss is discouraging, no doubt, but with a team as young as ours, the veterans need to do better than 7-24 from the field.

It's gonna be real interesting to see what Jamal Crawford contributes to the team for the next game. I'm sure he'll put up some great numbers and help Jackson and Maggette to take fewer but better shots. I think we're doing alright for now as a team, the night is still young and we got folks coming back and joining the club real soon.

I'll give it to Kelenna Azubuike tonight. He comes back from an injury and puts out some pretty nice numbers. I would like to see him get more "Altered Beast" on court and show some serious emotion. Buike can ball no doubt! (So glad he's not a Clipper, what a mess)