Share All sharing options for: Game #5: Warriors vs. Nuggets 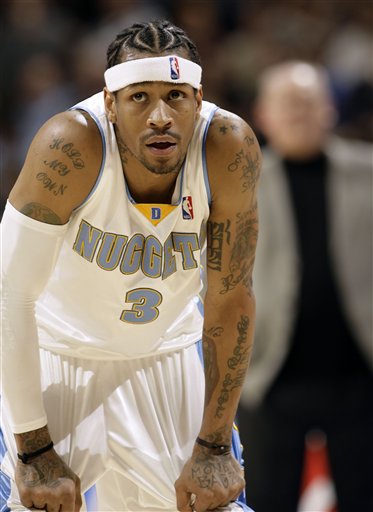 Love watching you play man. But I'm glad it's not tonight!

Hey, it worked for Obama; why not us?!

Well, tonight we're definitely seeing some change in the face of our opponents. With A.I. shipped off to Detroit, we'll be facing a very different team than the one that used to pummel us in recent years.

Now I'm not saying the pummeling is going to stop; it just might happen for entirely different reasons now.

Be sure to check out SBN site Pickaxe and Roll for coverage of the game from the Nuggs perspective.

Truth be told, we're probably a bit better off tonight than a Nuggets team stacked with Iverson and Anthony. Amidst the mayhem, Billups was unable to make the trip out to the Bay Area which, unfortunately still leaves us facing Carmelo, and K-Mart.

Man, how this team didn't make at least the 4 seed in the Western Conference last year is beyond me.

But in true Warriors fashion, I think there's still hope. ‘Melo traditionally bangs up our soft interior when we step onto the court with him. I'm pretty interested to how Turiaf can affect this. So far he's been pretty impressive at times on D in the paint. Hopefully Nellie gives him enough time to display some of that muscle tonight. Shutting down ‘Melo scoring at will is going to be a huge key to this game.