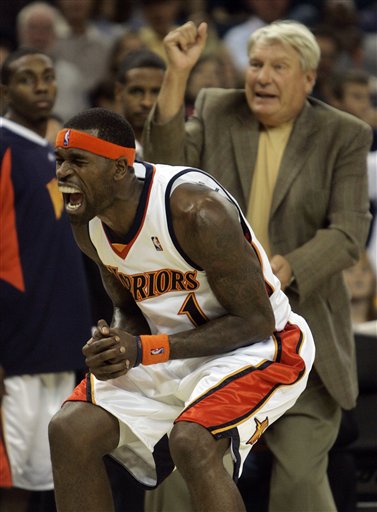 Jack and Nellie have had better days....

Now that wasn't a pretty game.  I found myself distraught as the last second ticked off the clock and I said, "What could I possibly do to make myself feel better about this?"

Basketball?  As in, ball goes in the hoop? 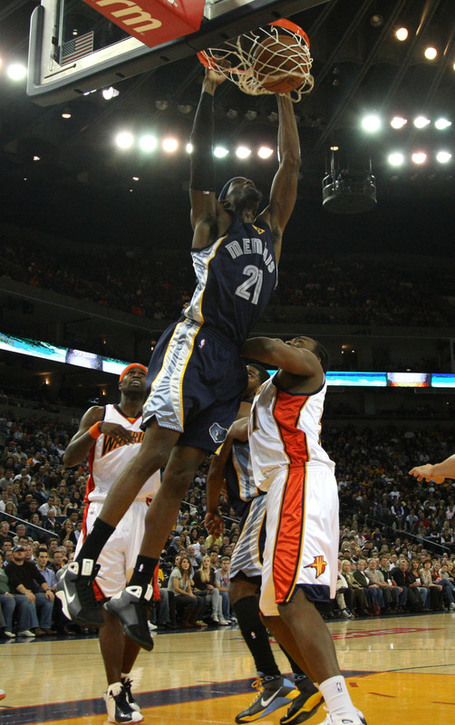 Basically sums it up

That was obscure, I know.  Point is - OJ Mayo and Rudy Gay destroyed us tonight.  Granted Rudy Gay started off terribly, but as soon as the 2nd half hit, something just happened to click in him and he went lights out during the 4th.  Cool!  As for OJ Mayo, the Grizzlies made a good trade draft day to acquire him.  Mike Miller was a Warrior Killer, but looks like OJ's ready to step up and take role.  Yay!

Hakim Warrick - high flyin, high powered, and monster jams.  That's how you destroy a team's confidence late in a game.  How do we get this guy on the Warriors?

More bad news - I didn't get to see my boy Darko Milicic play!  I really haven't had much of a chance to see him play, and seeing as though he was drafted 2nd overall and above Carmelo Anthony, Chris Bosh, Dwayne Wade, Chris Kaman, Mickael Pietrus, David West, Zarko Cabarkapa, Boris Diaw, Travis Outlaw, Kendrick Perkins, Leandro Barbosa, Josh Howard, Jason Kapono, and Luke Walton (alright that last one's a stretch), he's got to be good, right?  Oh well, maybe next time he won't get two techs.

But hark, there was some good news!  Marc Gasol found himself deep in foul trouble early and was kept ot less than 20 minutes on the court.

Oh but it is!  Our first-round draft pick of this year was brought into the game early in the 1st quarter.  Who in the heck believed Nellie would even play this guy at all before the 10th game of the season?  17 minutes, 8 points, 7 boards, and 1 monster block.  Not too shabby for a first time (that minute the other day doesn't count) out! 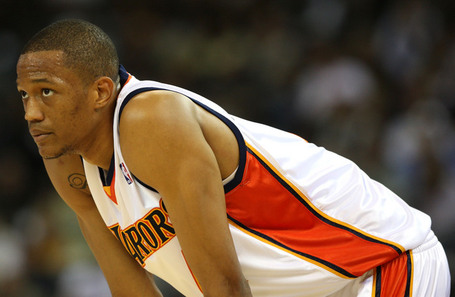 Doesn't he kind of look like a stretched out Sam Cassell?

And Marcus Williams?  I thought this guy was supposed to sit on the bench all game?  He's not our long term solution at PG, but he showed some talent in his passing abilities. 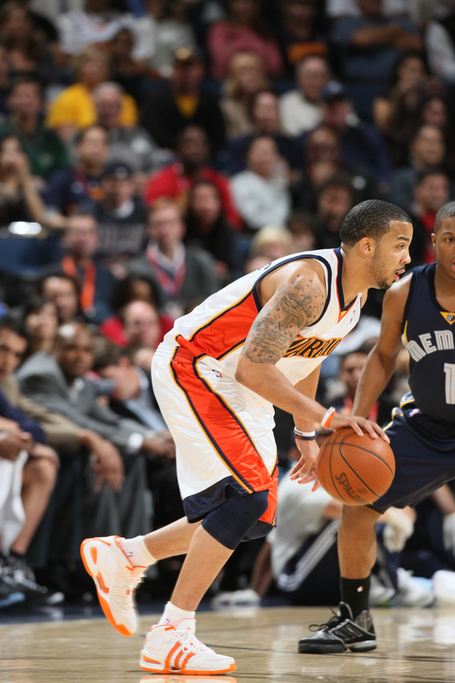 Shouldn't have had that Big Mac before the game man.

A double-double a game...

Makes Andris hold the longest active streak for double-doubles in the NBA as well as tied for the longest streak by a Warriors player since Nate Thurmond.  Good work as always Beans.

I feel like I've already written this before in another recap...but second time's the charm!

Again, we witnessed another collapse.  Just when things were getting exciting in the last 5 minutes and we regained the lead, bad shots were taken, poor decisions were made, and the Grizzlies players decided to flip the "on" switch on the jumpers.  In these situations, it's Jack's responsibility to lead the team to victory and not make costly mistakes.  Didn't happen, but I will commend him on recognizing that.

"We didn't play hard enough," said Jackson, who was guarding Gay when the Grizzlies' forward made his pivotal 3-pointer. "Down the stretch I am the leader of the team, s I've got to be smarter and can't give up a wide open three to their best player at the end of the game."

Yet another game we should have won.  Oh well!

Time to Rise Above It!

Next up - the Wack-town Kings!  Should be a guaranteed win, but hey, that's what I said about both Grizzlies games.  Maybe I should just predict losses from now on so I don't get disappointed.

However, the good news is that Nellie seems to trust B Wright and even Anthony Randolph.  It'll be interesting to see what these guys can do this early in the season.

I'll also have fun watching Nellie put Belinelli on the court in order to increase in trade value and fail miserably at everything.  What happened to this guy being a shooter?

Sadly, Al's time as a Warrior might also be over....

CJ Watson.  I'm lovin' this guy's hustle and energy on both sides of the court.  He made some nice shots and assists, but he put in the extra effort by crashing the boards.  Looks like the PG situation ain't too bad...