Oh man. That was no good for anyone involved. There aren't very many times where I end up thinking, "Damn, I wish they had just blown us away instead" but this might be one of them. Tonight the Warriors interspersed random moments of good basketball with the appropriate amount of mediocrity, allowing us to gift wrap and hand this much needed win away at the last second. Of overtime.

I think I just threw up a little bit in my mouth.. 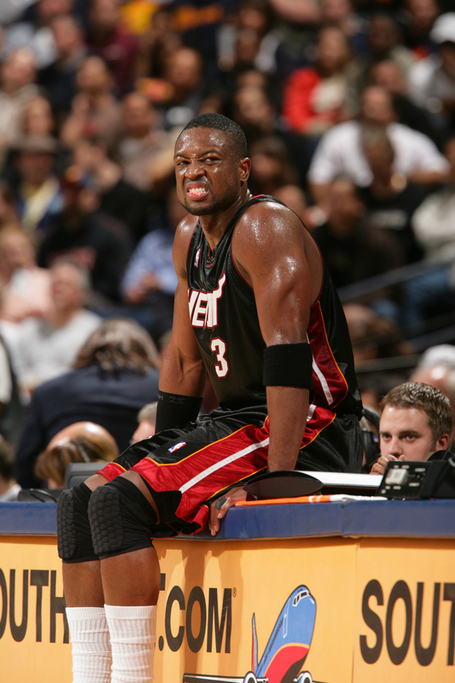 Even D-Wade was disgusted by how we blew this game.

Sure, I've seen the Warriors play worse than this. But any game that finds us in the lead with 13 seconds left in an overtime that we should have never been in, only to blow it all up by allowing a miracle 3 pointer, turning over the ball, and fouling a shot with 3 seconds left is...

Well. It's about as bad as it gets. Hey is that a cliff? JUMP!

This game came down to one major fatal flaw. Rebounding. I can't stress that enough. We can go through the game over and over and certainly come up with other contributing factors, but the fact remains that the Heat got way too many 2nd and 3rd chances. All said and done, the Heat had 21 offensive boards to our 11, with 13 of them coming from Udonis and Marion. Add to this point that each of them put down 21 points and I'd say we did a pretty poor job of containing Miami's bigs.

I'd go on a rant about not containing D-Wade, but honestly, what can you do about this guy? Some of the dunks that he raised up on tonight (under the hoop no less) were downright nasty. After losing 6 games, it's an unfortunate truth that a percentage of Oracle-goers were going tonight to watch Wade play in person. And with 37 points, 13 dimes, they got their money's worth. 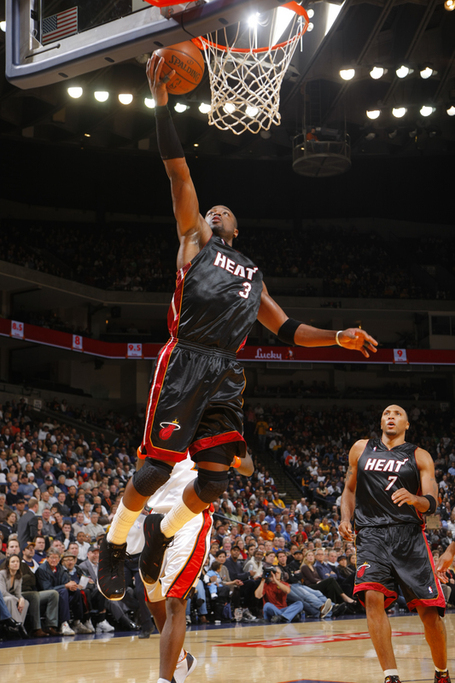 Ignoring the terrible finish to the 4th quarter that led to overtime and the terrible finish to overtime that led to me weeping like a baby on my couch, there were some moments of brilliance in this game from the Warriors. Much of it came in the form of Jamal Crawford, who made a serious statement on the Oracle floor; the aforementioned statement being (and I quote) "Swish!"

Jamal was one of the few reasons that we were able to keep our minor lead throughout the better part of the game. Every time the Heat seemed to get close or tie it up, there was Jamal with a ridiculous drive or a deep three. 40 points and 7 dimes later it wasn't quite enough, but it's tough to rest the blame on the guy that had the buckets when we needed them.

In fact, it's really tough to rest the blame on any of the Warriors out on the floor tonight. They're failure came more as a team than as individuals. When I look at all 8 Warriors who stepped on the court tonight, I can think of a positive notes on how they all played tonight.

CJ was all over the floor in the 4th gaining us possesions. Beans brought the double double train back to the station with a smooth 7-10 shooting. Crawford and Maggette ran offensive clinics tonight. Randolph looked like he belonged on that floor with three boards and 6 points in only 7 minutes. Jack has some dishes that broke my ankles all the way from my couch. Wright had some excellent takes with 15 points on 7-13 shooting. Turiaf was a force in the paint with 5 swats including that monster one that almost landed in the Smirnoff lounge...

...which ironically landed in the hands of the Heat...

But let's not talk about that. I'm attempting to go to my happy place right now and that little tidbit of information is not allowed in. (Seriously, you'd dig my happy place. It has a cotton candy machine.)

Bottom line. We should have won this game. In more ways than one. Yes, we are going to give away games in the course of the season; every team does. But tonight's game, a game that could have ended this losing streak, was not the time to blow it.

It seems like we are seeing more and more games where we are but one small aspect away from getting ourselves the win. Today our failures truly caught up with us in the end. Our lack of boarding throughout the game culminated with the layup that took us to overtime. Our irresponsibility with the ball culminated with the turnover that gave the Heat the ball back with 9 seconds left, followed by the inbound pass that allowed them to get the final lead.

Man. I sure hope we figure this out pretty soon. Cuz this one hurt.

It can be none other than Jamal Crawford tonight. As stated before, he was a defining factor of why we were even able to compete in tonight's game. His 40 points will serve as a consolation prize to this game. There's no joke about how he played tonight; it looks like he's starting to settle into Nellie's system. Cross your fingers here.