Share All sharing options for: RECAP: Warriors 119, Bucks 96: It Was a Good Day

Update: As much as I want to believe that we beat the Spurs...turns out we played the Bucks last night.

They shoulda bumped this in the Roarcle last night!

First, J-Rich gets moved to the Suns in a ridiculous trade, then the Warriors beat the living daylights out of the Bucks? AND I get to write the recap about it?

Man, oh man! Like my main man Ice Cube said, it was a good day! 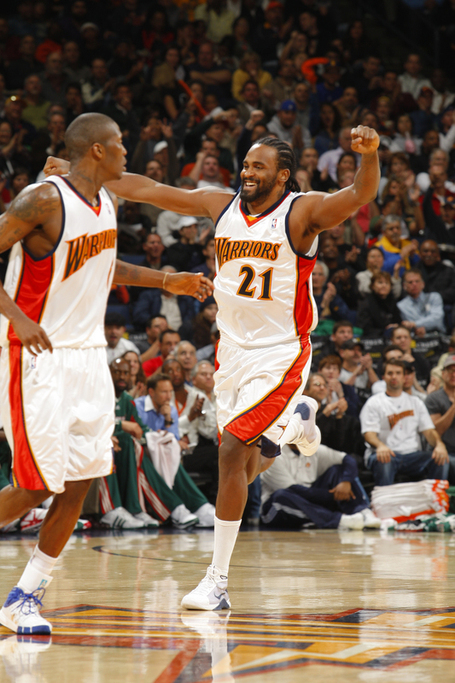 Let me first begin by saying, congratulations Warriors. Two in a row. After losing to the Wizards (that was a fun game) who would thought we would see two wins in a row? Honestly, I was almost expecting to see one win a month for the rest of this travesty we call a season, but hey, like always, I was proven wrong. 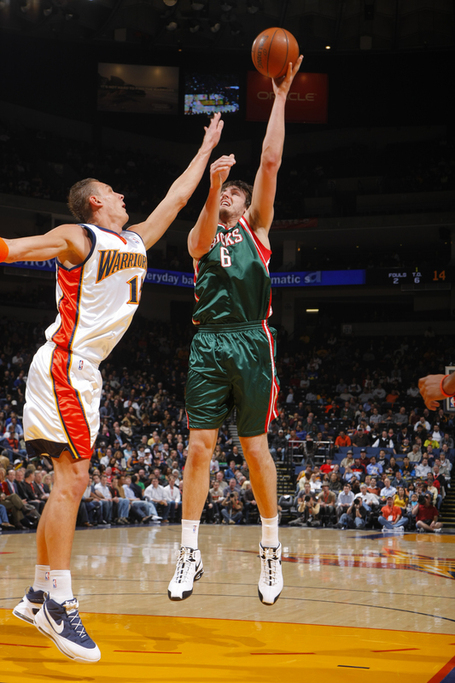 The Battle of the Big Guys - Dre vs. Bo

Winner - Andris Biedrins. Just look at his stat line - 27 minutes, 18 points, 14 boards, and 4 blocks. EFFICIENCY at its finest. Bogut just looked lost through the game, and didn't know how to handle Andris. Granted, the Bucks did just come off a game playing the Suns, so Bogut was definetly fatigued off trying to handle Shaq and Amare. Can't complain though, AB runned and gunned him up and down the court. It even looks like Andris is started to get good at taking it in, and dishing out to our shooters - more on that later.

I still believe this man has one of the prettiest shots and once he gets a handle on it, he's going to do huge things for this team. I definitely have to give him props for staying cool on defense and having some great plays against Richard Jefferson. 16 points from an undrafted rookie is exactly what the R Dizzle ordered. 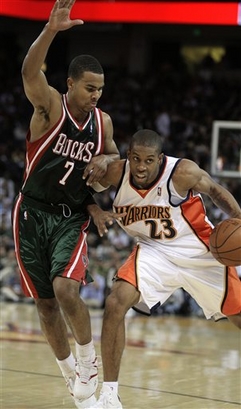 Everybody wanted to hate on me when I was giving CJ Watson his props. "You can't expect anything from a guy that came from the D-League," they told me. "We only brought him on last year cause Baron needed some rest," they said. Well here's what R Dizzle says, "CJ is the man!"

This man hustles hard and fights for the ball constantly. I see him going after every board and scrapping hard against the bigs like Bogut every night. His shot is beocming refined and its getting to the point where anyone can hand him the ball within the three-point line and he'll bust down the J. Yes, his 19 points and 4 assists are great. But his 7 boards are even more impressive.

Man, I wish I could give you the Warrior Wonder from last night.... 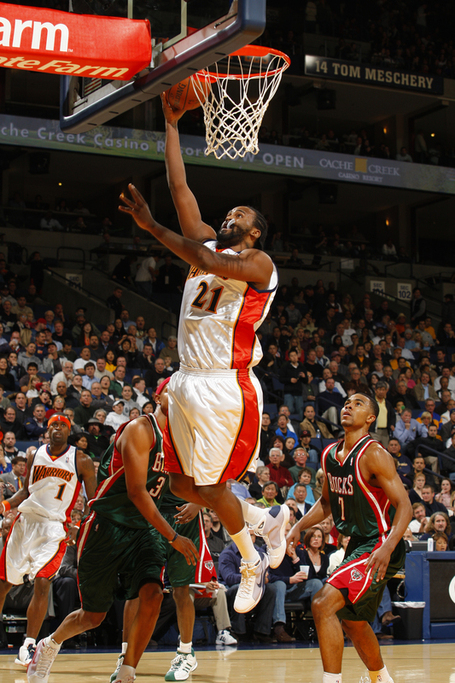 Is his mouth piece ever in his mouth?

A potent offense. Wait no, I can't say really say that, I would give more credit to the DEFENSE. Surprising how hustling hard down the court and not letting people blow by you leads to victories huh? Great stuff. How bout we try that again on Friday?

Jax not doing stupid things. Wait no, I can't really say that, but I can say that he did try to distribute the ball and get it out of his hands. Let's just say we ignore that 7-23 shooting night.

No Maggette. Wait no, I can't really say that either, but I will say that there was less selfish play and less silly shots. Maggs has his positives, he just needs to learn to play within his game.

Keeping Michael Redd blue in the 4th quarter. He basically did nothing. And that's exaclty why the Bucks only scored 15 points. GOOD D!

Here's another good one - 7 players over 10 points scoring. And guess who wasn't on that list? That's right - Jamal Crawford. Interesting how that works....

And last but not least my pick for the Warrior Wonder.... 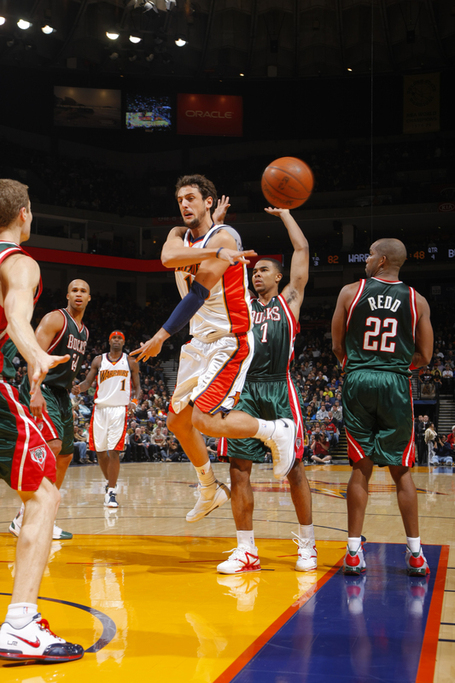 Look at me Nellie! Give me more minutes!

Marco Bellinelli. My god, did I really just say that? Am I really giving Marco props? Let's take a step back to what I said about Marco after Saturday's loss against the Spurs...

Needs to go. I can't see how anyone can stick up for this guy at this point. Maybe he didn't get a fair chance last year to see the court, but he's getting time this year. ESPECIALLY LAST NIGHT. At the end of 15 minutes, he came out 1-6 with 2 points and 1 assist. Great shooting for a guy who's SUPPOSED to be a shooter. There's just no need for this guy to be on the court if he can't defend and he can't shoot. Blame Nellie all you want for not giving his fair chance, but Nellie must have seen something that we all couldn''t see before.

This is me eating my words.

Here's what I saw from Marco last night - hustle, heart, and confidence. Sure he shot well with his 5-7 shooting and 15 points, but it was much much more than that we got from Marco. When he got the ball under the hoop with an easy lay-in, instead of getting scared and shooting it immediately, he made the wise choice of pump faking, letting two defenders jump over him, and then shooting. There was great defense against Ridnour and Redd.

There were no look passes that lead to incredible plays.

My personal favorite - a shot behind the backboard that just homed its way into the hoop.