RECAP: Warriors beat Nuggets: In my Nyquil kind of Dream!

Share All sharing options for: RECAP: Warriors beat Nuggets: In my Nyquil kind of Dream! 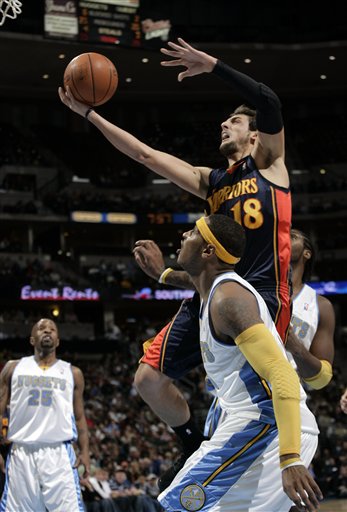 At the buzzer to win the game!!

Oh My God ... did you see that game? Did you see Saturday night's game against the Denver Nuggets. Simply AMAZING. I'm speechless. I'm without speech. To see the Warriors come back from a huge deficit and win the game at the buzzer was CRAZY!! Jackson pouring in a career high 47 points while Randolph exploded for 23 points and 20 rebounds what else could you possibly ask for?

Naw I'm just playing. That was me on Nyquil (which sad to say is a hell of a lot more fun than watching the Warriors these days). We got spanked big time tonight! Jackson and Randolph combined for 11 points. Ya 11! It seems as though the side effects of Nyquil offset the good effects. Let's investigate further shall we: 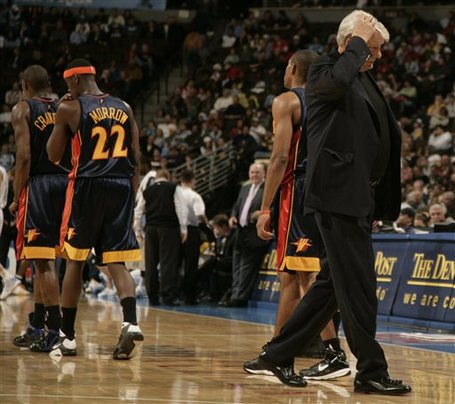 Know that Nyquil hangover? Says it all doesn't it.

The Warriors lost 105 to 123 tonight against the Denver Nuggets. I thought we were going to win tonight but then again was sitting on my couch sipping Nyquil looking for a yellow cat I don't even own. That's right.

The thing is ... we're pretty bad. Wait, let me rephrase that because I don't want ya'll to think I'm complaining. We're just not as good as 29 other teams in this league, so it's hard for us to score more points than our opponents. I thought tonight I could deal with my cold and feel rejuvenated when our Warriors put on a show and beat a pretty good team, but alas it was not meant to be. Next time I need to read the side effects of Nyquil before I make outlandish predictions. I think I'll post the effects of tonight's game: 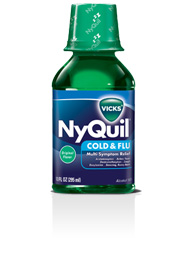 Use this when traveling to Denver Colorado to play the Nuggets. Temporarily gives boost to following players:

Rob Kurz: Who is this guy and where did he come from? Scoring 20 points and grabbing 7 rebounds in 33 minutes ain't bad. Shooting 7 for 11 and 3 for 3 behind the arc is even better. This guy is good. Not good enough to neither start nor be a backup, but I'm liking Rob more and more. He does very well in garbage time and considering this whole game was garbage, he got the nod to start from Nellie. I'd like to see more of him. If anything, it makes things interesting but I'm willing to see how this plays out.

Jamal Crawford: The only other Warrior who had a decent game. Crawford excelled in getting to the basket and not involving anyone else in the offense. Scoring 25 points and 5 steals, Crawford literally played the entire game to keep it as close as possible (under 20 points).

Side effects can occur during the game when using Nyquil so please consult your coach before using:

1) Poor Defense: Sedatives to the defense could cause offensive opponents sprinting by you and scoring 123 points easily. Product could also make you think you are guarding 4 opponents when in reality there are 5. Defense could then slow to a snail's pace to allow the Nuggets to have 6 players score in double digits. Third quarter could also improve your chances of trailing by 30 points.

2) Carmelo Anthony: Do NOT use Nyquil if you are playing Carmelo Anthony. This might allow him to score 27 points with 9 rebounds in 30 minutes of play. This drug might also make you just hand him the ball and say "please show me how to score". 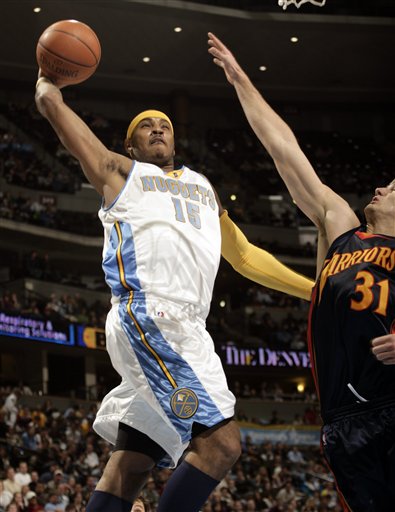 How bad is our D? Carmelo can score with his eyes closed!

3) Poor shooting: Nyquil can make you drowsy. So Stephen Jackson next time please realize if you are shooting 1 for 13 ... PASS THE BALL! This could also affect Watson, Randolph, Buke and Morrow who all combined 12 for 39 shooting. Other than our two hot players no Warrior could hit a shot. We even shot two 3 point airballs in the third quarter! I found myself chanting "air ball" with the fans when I realized I was rooting for the other team.

In the end, children, please stay off drugs whether it's legal or not. You don't want to turn into me. Back to back games are never easy when you are down on your luck with a cold. Let's just rest up and get ready for Dwight Howard on Monday and forget the loopy game that may or may not have occurred tonight!

Rob Kurz because his last 2 games are somewhat positive for Warriors to talk about. Let's see it again on Monday big guy!