Buy hey, they were without their All-Star Center and we did have most of our players back in the line-up. There had to be a chance, right? Right?! 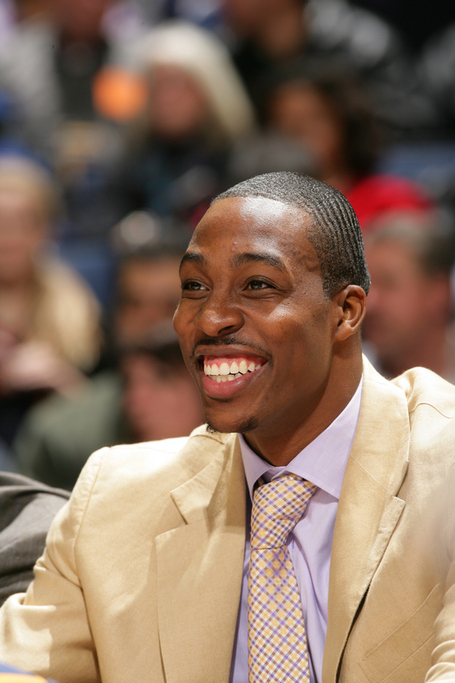 "Oh man. Can you imagine the score if I WERE in the game?!"

As always, we were treated to some good goods, and some baaaaaad bads. Embrace 7 wins and 18 losses and JUMP.

We didn't start half bad. I mean, we were a bit messy in the start with 5 turnovers in the first half of the first quarter, but it eventually got turned around. It did seem like there were a lot of whistles working against us as we got out of the gate (i.e. Watson's lack of a clear lane call) but let it be known that this was hardly a factor for tonight's loss.

One key factor, however, was our inabilty to penetrate Orlando's inside D. This unstoppable wall seemed to begin and end with Gortat. Seriously, this guy is a freaking beast. No I'm not just talking about on the court. I think the guy has beast DNA. It was like someone took a villain out of a James Bond movie, put a Magic jersey on him, and instructed him to swat and board anything that came near him. With Dwight on the bench I seriously thought we would get a reprieve down low. This guy and Battie with their combined 25 boards, 20 points and 4 swats made sure that the Orlando post game didn't miss a beat. 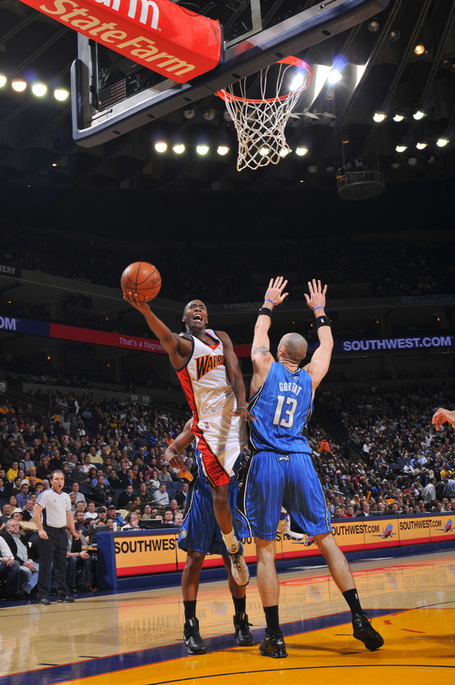 Perhaps if you had distracted it with something shiny it would have let you pass.

The bright spot of the night? You know it. Belinelli. It's got to be really tough to develop confidence coming in as an untested rookie into Nellie's regime. To see Belinelli playing with this level of confidence and producing great results is excellent news, even in the midst of this terrible streak of play.

Actually, now that I think about it, it seems that the only way that an unproven player gets a chance to prove themselves is in the wake of an injury. Didn't Monta explode in Baron's period of injury? Didn't Wright step up when Biedrins was out for a few games? And now Belinelli in the wake of another hole in the roster?

I wonder if this trend is limited to only players. Maybe someone should hit Cohan with a car and see if someone better steps up.

Bellinelli! He played a quality game the whole way though. It was incredible to see a player who has been so docile show some maturity in the past few games. Once can only hope that this becomes a trend. Because we can use some bright spots right about now.