At least were not THAT guy

Alright fellas, second game of this road trip and let's try to look at the Brightside tonight. If my boy FJ has the strength to look at the positives from our loss to Pacers, then I too will find it in me to stay content with the Warriors of the 2k8-2k9 season.

Let's take a gander at the positives for tonight, shall we?

2. The Hawks are coming off their worst shooting performance of the season. Doesn't mean they still can't go down.

3. We've lost 4 in a row. That's 5 less than our longest losing streak of the season so far.

4. The Hawks are coming off a 88-85 loss to the Boston Celtics. As my good friend put it, "they're still shell-shocked."

5. The Warriors are 25th in field goal defense. NOT LAST.

6. After the loss on Wednesday, the Warriors have given up over 120 points for the 6th time in 10 games. NOT SEVEN.

7. The Warriors rank 2nd in the league in scoring. That means that we can score a whole bunch. Nevermind that the Hawks have kept their last 12 opponents under 100 points, that's really not an important point.

9. I'm sure Anthony Randolph and Brandan Wright aren't upset over the trade rumors. Especially AR after being called out by Nellie today.

10. Ain't no feuding going on in the front office. Everything's just peachy. Our players and coaches are down to give 100% every game from now on.

I don't know bout all y'all but looks like we got this one bagged up.

Jump for the Predictions! 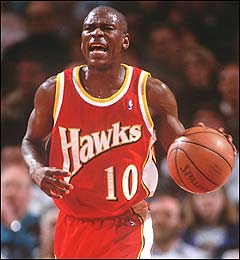