Funeral for a Mascot...

Share All sharing options for: Funeral for a Mascot... 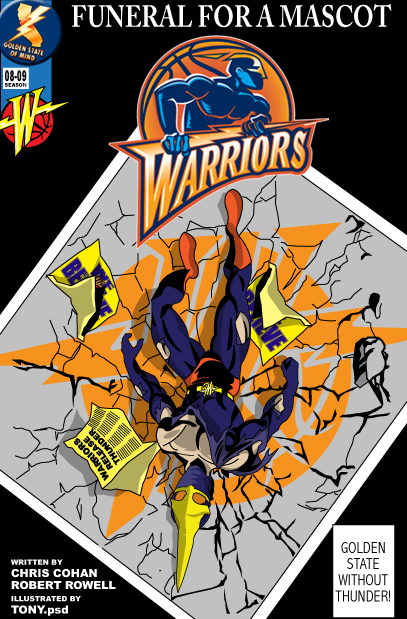 Shoot! We never got to say Good Bye!

I've been wanting to do this after I struck a chord with the "The Death of We Believe" illustration. I'm not trying to put the team down in any way, I'm just illustrating my thoughts on how much "we" as Warrior fans have lost so much in a single season... Baron, Monta, Air France, Harrington, increased ticket sales... and let's not forget our mascot, Thunder. Whether you liked him or not, Oracle is in need of a new mascot. I don't know how soon they're going to whip us out one but an official's time out or the opening intro just isn't the same without his antics.

Personally, I liked the guy. He was entertaining to kids, took the time for a snapshot with fans and the dude was a B-boy! He had some serious breaking moves! When I found out they were gonna let go of our mascot, this image came to mind and how much of a jip it was to Golden State's fans. Whoever Rowell and Cohan plan on replacing him with has got some serious shoes to fill.