Share All sharing options for: RECAP: Warriors 112, Rockets 131: Too much Yao, not enough Randolph! 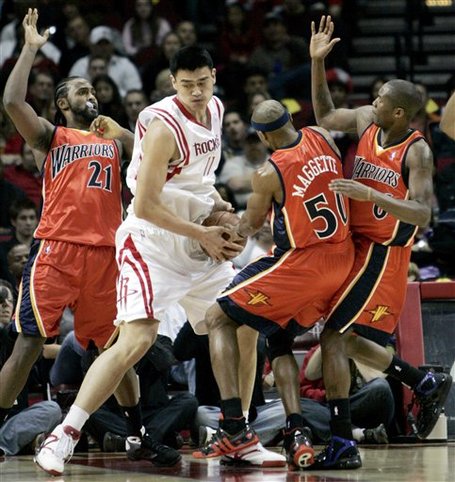 Nellie’s triple team strategy worked … until they started fouling out!

As Jim Barnett said tonight:
"The game was closer than what the score shows"

And he's exactly correct. If you missed Friday night's action against the Houston Rockets, you missed a great game. Sure we lost and are now in an 8 game losing streak, but I got to say, I came away with a lot more positives then I did negatives.

Bottom Line: we lost to a pretty damn good team, but we showed improvements. We had large stretches of playing as a cohesive team and some "coming of age" plays from my new favorite Warrior ... Anthony Randolph. Yes, I am now a believer.

The game could have been broken down into 2 different halves. The first exemplified everything I thought was terrific about the Warriors and then in the second half showed what our weaknesses are. The game was close until 2 minutes remaining when we lost our cool and had Nellie and Jackson ejected. But for the longest time, I believed we could have pulled it off:

I've been "complaining"(GSoMers calling it another word) all year that my one frustration with the team now that Baron's not here, is that we don't look like we're playing as a team. With the talent we have on paper and with Ellis coming back, I honestly believe we can be a playoff team. Jackson, Crawford, Ellis, Biens and Maggette in my mind could be a playoff team. However, lately our PG play has not allowed us to spread the ball and we play individual ball. Not tonight. In the first half we made passes I didn't think possible for our team. On some plays 4 Warriors actually touched the ball before they made an open shot. As one drove to the basket and saw another breaking free, they passed it out and shot a high percentage, taking the lead for most of the half. This was exciting to watch.

Stephen Jackson started the passing fever. Watching him break down the defense multiple times and pass it to the open man, Jackson was playing like an unselfish distributor. This also helped him collect a huge first half scoring 18 of his 26 points and dishing 4 assists out of 5 for the game. It was a different story in the second half as he tried to force his game and not to passing, but I'm hoping Nellie can replay this game for the guys to see what they did well. I also believe that Jackson plays better when he's off the ball. He's great while creating for others, but I like him better when he's in a position to receive the play instead of forcing it himself.

Maggette also capitalized on the transition breaks by pushing down the court and getting to the line all half. Without hesitation he would put his head down and drive to the basket knowing the Rockets were slow to get back. He had a solid 23 and 10 performance but wasn't a factor after the 3rd quarter.

Lastly, the best part of the half was the Warrior defense on Yao Ming. Nellie decided with McGrady out they could afford to triple team him, and they did that with success. The minute Yao touched the ball Turiaf, Biens and a third Warrior would swarm and attack Yao without hesitation. This caused Yao to fumble multiple times and it clogged down their offense to a halt. Yao had trouble to even muster 6 points in the first half as the Rockets were forced to run plays through Ron Artest and the others causing them to trail the Warriors until half. 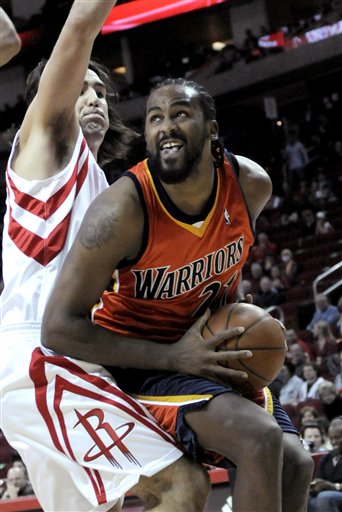 Ronny shut Yao down in the first half ... with the help of 2 others.

Anthony Randolph - What a performance the entire game. More to come.

A great first half strategy by Nellie to triple Yao fell apart quickly when Ronny fouled out in the second quarter. This then turned into the Yao show as he dominated the second half scoring 33 points and grabbing 14 rebounds for the game. Even more impressive was the fact that he went 17 for 19 from the line. The refs didn't help our cause but clearly the Warriors were no match to stop Yao as he forced position and made some nice shots. We knew he would be coming in strong but had we not lost Turiaf so soon, we might have been able to contain him. 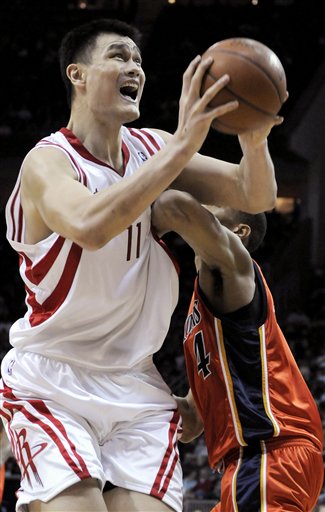 YaoZa was on display in the second half.

I'm not going to blame the refs on this loss either. Yes Yao got away with a couple shuffles and maybe Jackson didn't foul that many times, but at the end of the day we lost it ourselves. We showed our inexperience when the Rockets went on a tear. Instead of refocusing on team play we resorted to individual ball and lost all traction. It also didn't help the fact that Artest is a beast. Scoring 28 points with 5 assists, Ron was able to power his way through our defense and create second chances.

One could also argue that you'll never beat an NBA team who shoots 62% from the 3 point line. This is what the Rockets do when they have a force like Yao and Artest down in the paint. Guys like Battier and Alston are able to make careers out there because they're wide open.

At the end of the day, the Warriors in my mind showed heart. That's all I'm asking for. We came away with excellent plays but just lost it on defense in the end. It was even nice to see Crawford on our team as he's one player who can always shoot in the clutch. In the end the most exciting aspect of the game to me came from our Warrior Wonder for the night ... Anthony Randolph.

Anthony didn't score over 20 points like Crawford, Jackson and Maggette, but he made 3 nasty dunks on Yao and the Rockets defense. It didn't take long to realize that he's going to be good very soon. I've held my tongue on this guy all year waiting to see why the heck we drafted him and now I know why. For his height and lankiness Randolph has crazy hops and the ability to fly over most players. He only played 26 minutes but I didn't see this guy slow down the entire time. Anthony would help out defensively and sprint to the other end of the court grabbing the missed shot and dunking it home. He finished with 12 points shooting 6 for 8.

Though he collected an idiotic technical foul for yelling something after a nasty dunk, I give him the Warrior Wonder for his hustle and he excellent energy. Let's hope this is beginning of something big!!!