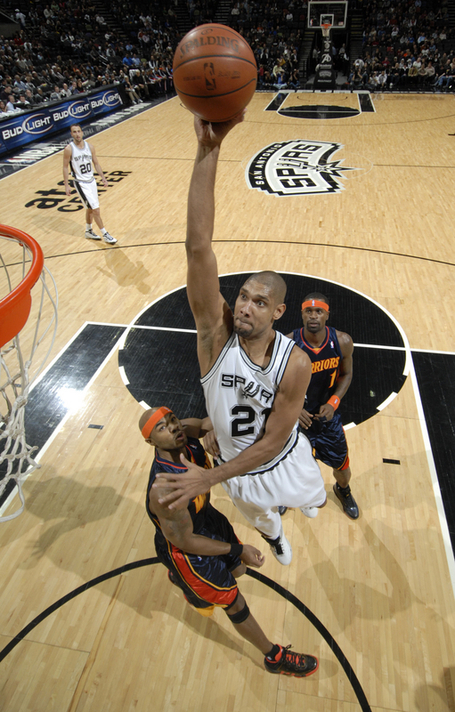 How do I defend against a real 4?

9 straight losses? A newly shaven Tim Duncan with 20 points in 21 minutes? Giving up over a 120 points to the Spurs? THE SPURS?!?!

It can't get worse than this, can it? 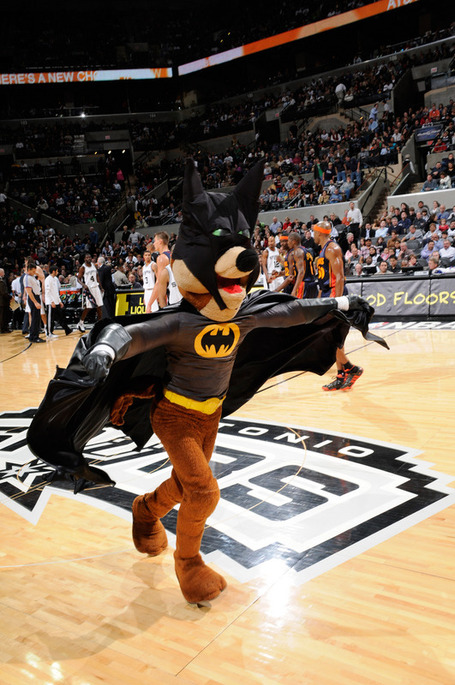 How come he didn't get any PT?

Man, oh man. Talk about fundamental basketball. Sure, one can easily make the claim that these guys are boring to watch and they have no flash. But, who cares? These guys play real ball - amazing ball movement, unselfish play, and only smart shots.

Ever wonder why they've been legitimate contenders in the NBA for the last oh, I don't know, 10 years? Great coaching. Excellent defense. Teamwork. Discipline. Look, I know that defense isn't a part of Nellie-ball, and I'm not even making the claim that we run Nellie outta Oaktown, but something's not working.

I look at TD's stats - 21 minutes, 20 points, 13 boards, and 5 assists and ask, why? Why don't we have someone that can do that? Admittedly, the Spurs got reeeeeaaaal lucky when they drafted him, but you're telling me that over the last 13 years we couldn't have gotten lucky with something? Oh right, that was the whole WE BELIEVE thing...but that was kinda short lived, wasn't it?

Mad props to the Spurs - they have done something right over the years. Picked up amazing players late in drafts, developed a great team, and play great ball. I can't hate on the 2nd most winningest franchise in the NBA. That's right - better than the Celtics. 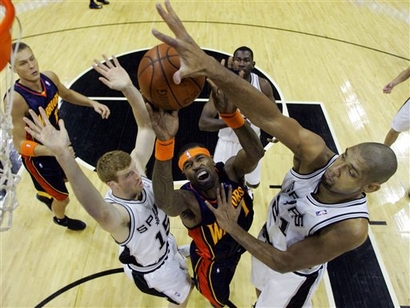 Why do I keep seeing this every game?

Well, here's the good news (sorta). He only played 15 mins and sat out the 2nd half due to an injury. Here's the bad news - see pic above. His game's never going to change and now that he's been given the power on the court, there are going to be dumb plays and too many times that he comes out thinking he's the hero. Jack can't be our #1 option - he's just not built for it. He's a good third or fourth, but definetly not a first. Don't write me off as hating on Jack - he's my favorite player because of the emotion he brings to the table, But, he's just gotta know his role. I'm glad he got to rest up because we'll need him against the Thunder on Monday. (Did I really just say that?)

I'll group these two together seeing as though we basically got the same from both of em last night. ICE cold from the floor, perfect from the free throw line, and basically no assists. Great...that led to a huge victory. Bad shooting nights happen, that's fine, but why continue to take shots if you can't get close to the hoop? Pass the ball, right? Well, Maggs went 1-10 from the field and 0 assists. JC hit 2-5 with 3 assists. Since no one's about to play defense, I honestly have no suggestions on nights like yesterday where nothing seems to go in. I guess defense is a bit too much to ask for... 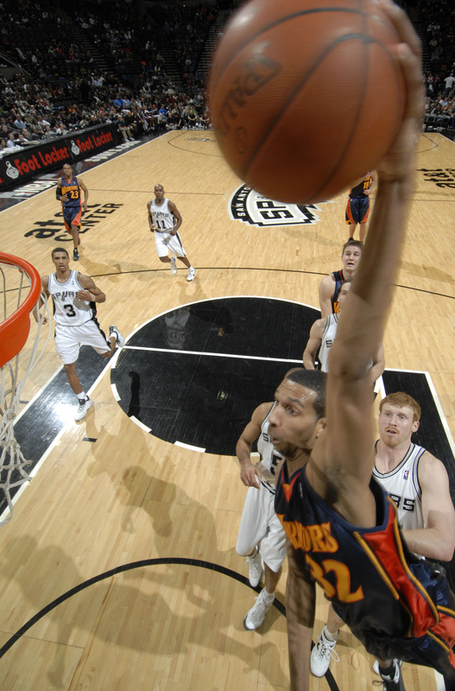 I shall call you - Dhalsim. YOGA FLAME!

Fine fine, I'm with you. He needs to play more so he can develop. The talent is there, it's just not refined. He had some great inside moves, a monster dunk, and hustled hard on defense. I don't know why he doesn't get more burn, but, that's for Nellie to know. This year's obviously about developing our young guys, and since we're stuck with him and AR, why not play em more?

Needs to go. I can't see how anyone can stick up for this guy at this point. Maybe he didn't get a fair chance last year to see the court, but he's getting time this year. ESPECIALLY LAST NIGHT. At the end of 15 minutes, he came out 1-6 with 2 points and 1 assist. Great shooting for a guy who's SUPPOSED to be a shooter. There's just no need for this guy to be on the court if he can't defend and he can't shoot. Blame Nellie all you want for not giving his fair chance, but Nellie must have seen something that we all couldn''t see before. 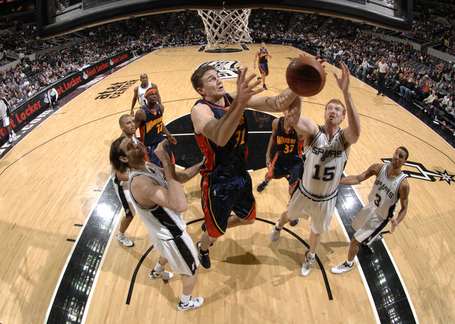 That's my boy! I hope he starts next game!

Alright, enough of the complaints. The only thing good about last night game's was that it wasn't like Monday's game against the Heat. Hash was right - a blowout loss is better than a tight game. Losses happen, the Spurs are a better team, that's fine.

HOWEVER, we have to win tomorrow against the Thunder. I think a lot more is riding on this next game than we all would have hoped, and if the Dubs do end up losing, some drastic changes might be happening.

I pray to Thunder (our mascot, may his soul R.I.P.) that we don't see those changes..

By the way, big ups to Manny "Pacman" Pacquiao for defeating Oscar De La Hoya in 8 rounds last night. That was quite a uhh...beating? Hmm...what was worse, the Warriors loss, or Oscar's? Sounds like a mighty fine poll to toss up!

But before I go...let me leave you with what I like to call

Let me know if you get the joke. 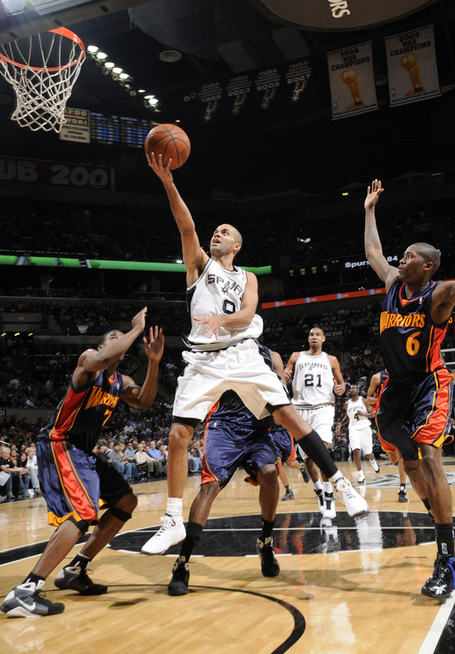 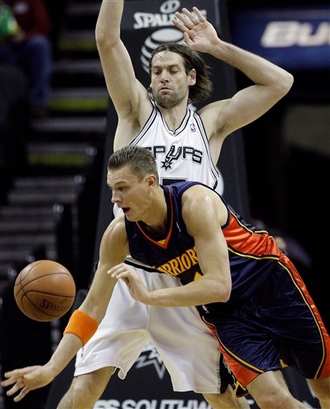 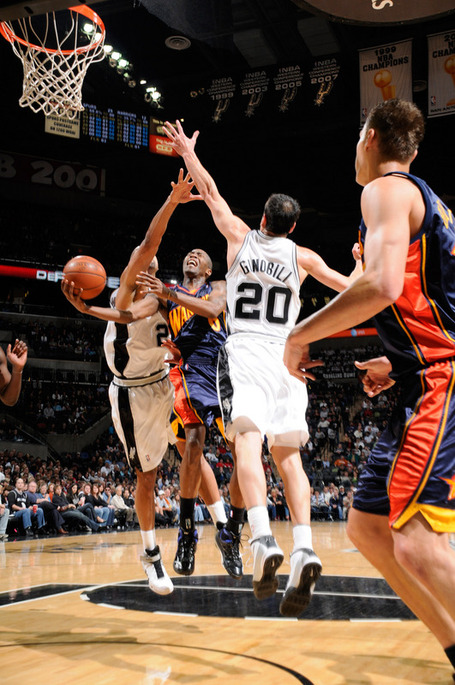 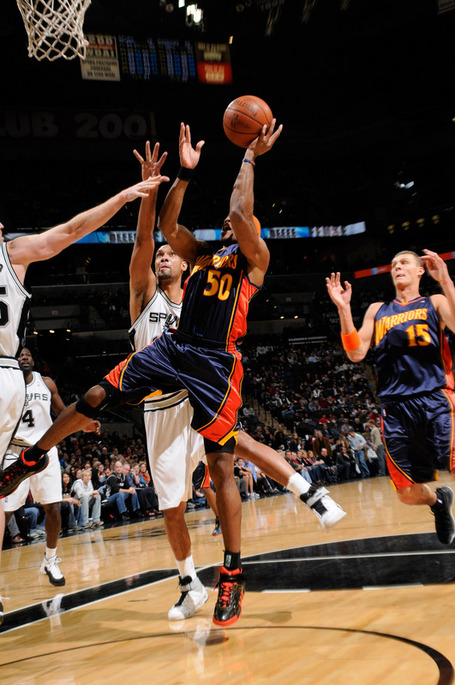