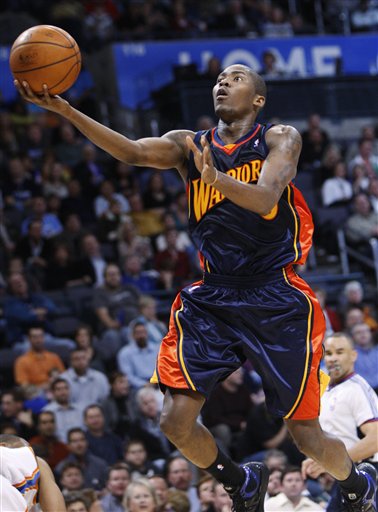 "We didn't win the world championship but it sure felt like it," Warriors coach Don Nelson said.

I can't believe that counts as a win. I felt like I was watching a summer league game half expecting Marco Belinelli to go off for 37 points. It was the NBA equivalent of a game featuring the Detroit Lions vs Cincinnati Bengals, somebody has to win, but nobody really cares. It was just two teams playing because the schedule says so. For the Warriors, it was a gift from the scheduling gods to mercifully end their 9 game losing streak. For the Thunder, just another loss, they're used to it.

Just be glad you're not a Thunder fan. Seriously, how bad is that team? There was a rumor (I'm making this up) that Oklahoma City wants to give the Thunder back to Seattle because they thought they were getting a professional NBA franchise, not a professional NBDL franchise. Supposedly Seattle denied the offer saying that they'd rather just have another reason to root for Portland. 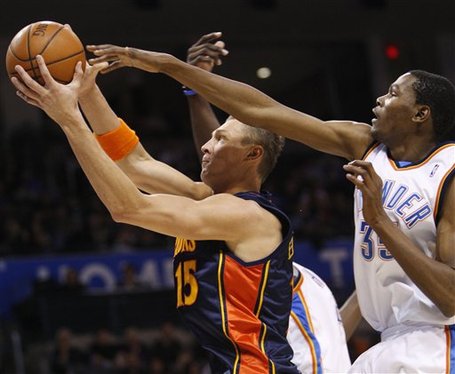 No Stephen Jackson. No Corey Maggette. For anyone who thinks that's the reason the Warriors won, I have some magic beans I'd like to sell you. I don't know how the Warriors did it, but without those 2, they managed to lead by 15+ points for the majority of the game. That's a testament to the contributions from everyone who got a chance to play. 7 of the 8 players who got on the court scored double digits, and Ronny Turiaf, the only one without double digits had 9 points.

It's also a testament to the man in the middle - Andris Biedrins. Did you see his line for the night?! 17 points, 21 rebounds, 5 assists, 3 steals, 2 blocks. He had almost half of the Warriors total rebounds and 21 times as many rebounds as Jamal Crawford! He was the best player on the floor for the Warriors and Nellie couldn't afford to take him off the floor. Because of his great work on the boards and challenging shots in the paint, I'm willing to overlook the 5 fouls and 6 turnovers.

Taking Care of the Ball
Speaking of turnovers, two things I have to touch on that just can't happen in the future. First, the 22 turnovers are just awful. Take care of the ball. The Warriors aren't good enough to just give possessions away. They were lucky they played the Thunder tonight because if they turn the ball over 22 times against any other team, you can chalk up an L. Second, the game got close when the Warriors had trouble once again inbounding the ball. They had a few scary inbounds plays and one that resulted in a turnover. I can't believe an NBA team has this much trouble inbounding the ball. There are junior high teams who don't have this much trouble getting the ball from out of bounds to inbounds without the other team touching it. Nellie, please please please teach the team how to inbound the ball. Why do fundamentals fall apart in crunch time? 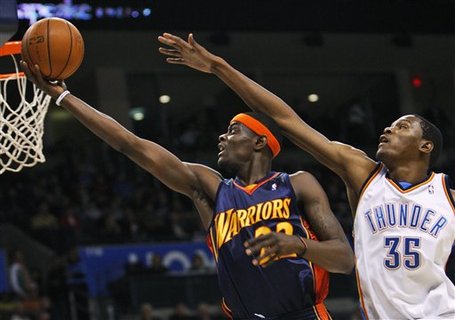 Anthony Morrow
Speaking of crunch time, you know who came up clutch down the stretch? The undrafted rook, Anthony Morrow. He hit a BIG 3 when the Thunder were making a run to take the lead from 7 back up to 10. Then after Durant hit the 3 pointer to cut the lead to 3, Morrow calmly stepped to the line and swish, swish, lead back to 5 and essentially put the game away. He then grabbed the defensive board on the other end, hit 2 free throws, grabbed the defensive board again and then hit 1 of 2 from the line. He didn't have a good shooting night from the field, but when crunch time came, he was there.

The Thunder
Speaking of poor shooting, the Thunder could go down as the worst team ever in the history of the NBA. 2 wins, 20 losses. 0.091 winning percentage. They're on pace for 7 wins. All but 6 teams in the league already have 7 wins. Scary stuff. Thank goodness for the Timberwolves and Grizzlies or else they'd be 0-22. Good thing they fired PJ. They've been on a roll ever since. I kid, I kid. 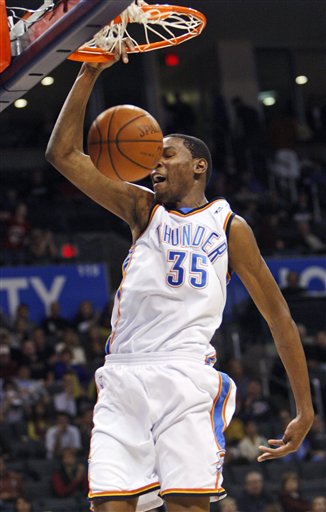 Kevin Durant
Speaking of the Thunder, the only fun thing about the Thunder, Kevin Durant. What a fun player to watch, especially when nobody plays defense on him. 41 points, 10 rebounds. He's so long and can get his shot off over anyone especially Kelenna Azubuike and CJ Watson. He's so smooth with that shot and is extremely agile for such a big man. His offensive game is niiiice. He's got the mid-range jumper, the post up game, the dribble drive, runs the break and has now added that 3 point shot. The one glaring hole in his game is that he doesn't make his teammates better. It's a red flag that he's the best player on a horrible team, but with that talent I'd risk trading anyone or combination of players on the Warriors for him (except for Marco, he's a keeper).

Marco Belinelli
Speaking of Marco, I know I give him a hard time, but he played very well tonight. He played decent defense on Durant, staying in front of him and challenging shots. What I liked tonight was his patience on offense. He seemed to be under control. No crazy shots, just seemed to let the game come to him. Oh and he had that beautiful pass to Biedrins. I liked seeing him set up his center. Honestly, hearing him complain about playing time really is annoying, but he at least came through tonight. Now he just needs to get consistent and EARN his playing time.

Brandan Wright
Speaking of playing time, why did Brandan Wright not play for most of the second half? He was playing well the entire first half. 15 points, 5 boards, 5-6 shooting. Did he get hurt? He was shooting well and giving the team a positive impact. What happened? 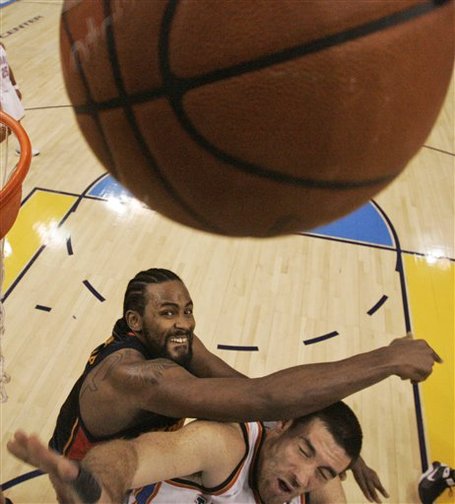 What it all means...
This win doesn't really mean that much. It's given the Warriors a little more confidence but it's not like they pulled off any sort of big win. This just proves they are better than the worst team in the league even without their two top scorers. They'll have a harder test on Wednesday when the Bucks come to town. A real NBA team to play.

Andris Biedrins of course. Can we get him into the All-Star game?