Share All sharing options for: GSOM Night: 5 Reasons to Attend 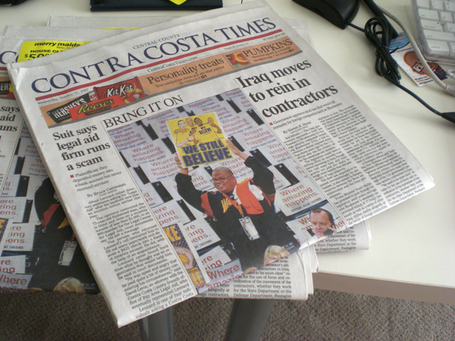 Last year at Opening Night GSOM Night, Tony made front page of the CC Times. It was the biggest story of the day. That's how big Opening night is. Front page Tony.

Tickets for GSOM Night have been on sale for almost 3 weeks now since my original post announcing it. As always, I've been working with Warriors' group ticket sales rep, Chris Murphy to get you guys the best deal and make it as convenient as possible to get your tickets. This year, we've got a direct link to purchase your tickets, you don't have to send your requests through Chris. Check it out: Buy your tickets online

There are still many available as 130 tickets have been sold. Is the economy responsible for the lower than expected GSOM Night ticket sales? Or is it that the team may not be very good this year? Despite those 2 reasons, there are still plenty of good reasons to get yourself a ticket to GSOM Night.

1) It's Opening Night!
Last year was my first opening night game that I've ever been to in any sport. The very first home game of the season is quite a different experience than any other home game. There was a certain electricity in the air and the crowd felt ready to explode as tip off drew nearer and nearer.

Hit the jump for more reasons why you shouldn't miss this game.

2) First Chance to See the New Guys
Opening night will be the first time any of the new guys step onto the court for the Warriors. If you're as curious as I am about how Corey Maggette, Ronny Turiaf, Marcus Williams, and possibly, Anthony Randolph will play, you'll definitely want to be there.

3) T-Shirt Designed by Tony.psd
For the first 500 people who purchase tickets, they'll get a free t-shirt. Last year, Tony designed the shirts so that the style was players as silhouettes on the front of the shirt. This year, Tony is stepping it up and putting more detail into the drawings. We're still in the process of negotiating with the Warriors about what exactly goes on the T, but from what I've seen so far, it'll be some of his best work yet. As a hint, we're going to get our first non-player on the shirt. Hopefully in the next few days, we'll finalize the design so I can post it.

4) Facing the Hornets
As a basketball fan, I enjoy watching the best teams come to town and see how the Warriors match up against them. The Hornets are at the top of the class. Just like watching LeBron, KG, or Kobe in person is vastly different than on tv, you'll love watching Chris Paul in person. He looks smaller in person but is also so much faster. He's just this blur and you sort of sit there in awe just watching how awesome his game is.

5) $2 Goes to the GSOM Kids Fund
We've changed up the game a bit this year. We're giving back to the community by using GSOM as a way to help underpriviliged kids get to a game. For every ticket you purchase, $2 will go to a fund to purchase tickets for kids to attend a game on Martin Luther King Jr day in January. Also, you can donate 2 tickets to that game and receive a limited edition Andris Biedrins signed poster.

I hope to you see at the game! Get Your Tickets!