OPEN THREAD: Warriors vs. Pacers- The Dunmurphy Sisters are back!

Share All sharing options for: OPEN THREAD: Warriors vs. Pacers- The Dunmurphy Sisters are back! 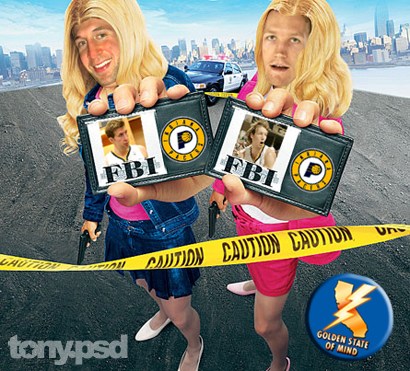 Coming off last night's road game loss to Portland, the Warriors are coming home where the next 7 games are going to be at The Oracle. We could really use a win right now! Not to say its going to be an easy task, Troy Murphy and Mike Dunleavy, aka The Dunmurphy Sisters drop by Oakland with The Indiana Pacers. (Indy Cornrows, check em' out!) Actually, these folks seem to be struggling as well with a 13-23 record. So, this should be an interesting match-up. Both teams are gonna be hungry... shoot, a win is a win!

Who's gonna step it up tonight? Jamal? Corey? Kelenna? Andris? If all these guys have a nice shooting percentage, play some hustle defense along with contributions off the bench we can really win this one. We just gotta make sure folks like Danny Granger (25.9 ppg) and T.J. Ford don't light it up. While our squad's going to keep it competitive, we're gonna have to play hard as hell just to lock down that win at the end of the fourth. Somebody... anybody... contribute and make it a 11-28 night!

For those of you who witnessed Dunleavy's return last season to the Oracle, I've never been to a game where everytime he touched the ball, folks booed the heck out of him... and that was fun! Mike's had his fair share of jokes here on GSoM, not to mention his classic on-court action shots. It should be interesting to see what he comes up with tonight.

- Andris serves up a Double Double Meal deal for everyone.

I never do enough polls... Who would you like me to draw next: