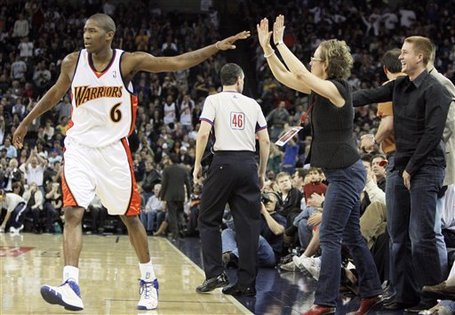 Finally ... a reason the fans can celebrate!

So if you took my advice and watched Slumdog Millionaire last night instead of the Warriors, then I apologize, but I did say we were going to win didn't I? Warrior fans had a reason to celebrate last night as they beat the struggling Hawks 119 to 114.

I think my positive attitude is rubbing off and it clearly had an effect on our Warriors last night! Can I possibly withstand this all season? Friday night's game had all the ingredients I needed to make it one for the season. We had captain Jackson back from injury (reminding us how important he is), we saw what it was like to have Jackson, Crawford, and Maggette all play at the same time, and we saw something I harp on all the time ... hustle from our starters!

Let's take a look at how the game unfolded shall we?

The Associated Press had a chance to catch up with Jackson prior to the game last night and it was interesting to see what he had to say coming back from injury:

"The biggest thing is to stay positive. That's what YaoButtaMing from GSoM has taught me. No more prancing around with injuries. Now I can focus on the positive things in life, like being able to afford premium gas for my Hummer."

Corey Maggette also took my advice and welcomed Nellie's instruction to not start and come off the bench because of poor play. Jackson responded:

"As we get guys back we'll keep improving. Corey is somebody to learn from. He doesn't worry about starting; he's just a professional. We're going to be tough to beat when everybody is clicking. And YaoButta has taught us that"

Maybe I'm taking more credit then I deserve however, the game last night really came down to the fourth quarter. The Warriors led at each break and the game was close the whole way. The Hawks were trailing close behind us and could have easily taken the lead until Marvin Williams from the Hawks was taken out of the game and sent to the hospital after a scary hit on the head in the second quarter. It didn't change the game drastically but it gave the Warriors an opportunity to keep the lead. 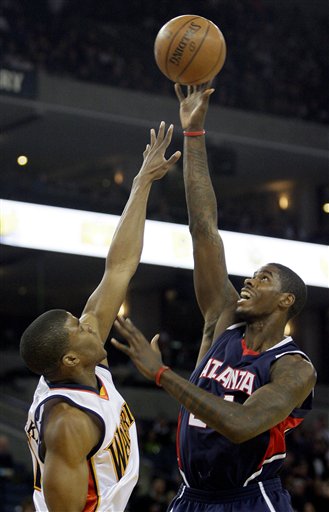 If Marvin stayed in the game, he would have scored 40 on this defense!

With 2 minutes remaining in the game it was tied 106 to 106 until Jackson hit a three to put it away. Thanks to our three stars in Jackson, Crawford, and Maggette we sealed the deal and our Warriors are a lot better than what our record shows. On paper if we add Ellis and Biens to the mix, I think we'll be the "sleeper" team of next year. But for now, let's look at the three musketeers and see how they won it:

Jackson: It's great to have Jackson back. Apart from his offensive power which we needed, it's his defensive mindset that lifts the team and makes everyone play a little better. Scoring 24 points, grabbing 7 rebounds and dishing our 6 assists, it was evident that he was the reason we won. The last minute 3 was vintage Jack!

Maggette: Not starting the game was HUGE. I was shocked. But in the end it was the right move by Nellie. Maggette was instrumental in our win by coming up with 24 points and 16 rebounds and shooting 12 for 14 at the free throw line. Even more impressive was the hustle plays I haven't seen from him in a while by diving for loose balls and putting up nice defensive stops. This is the Maggette we need in order to win games and if it takes him coming off the bench, then I'm all for it.

"Without his rebounding, the way he played, we wouldn't have won tonight," said Stephen Jackson 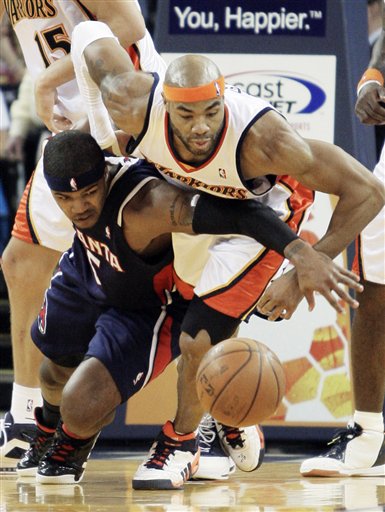 Crawford: I knew Crawford was going to have a big game. He was due. 29 points kept us in the lead the whole time. More importantly he came alive in the second half. Jackson and Maggette helped free him up but Crawford's clutch shooting was fun to watch. Just imagine how good he can be with a proper point guard. Even in New York he didn't have a passing pg, so I'm hoping with Jackson back it can help a little.

All in all it was a great Friday night game to watch. Here's hoping we have many more to come. I'm optimistic!

Here's ESPN's Video recap only because it was oh so sweet! Enjoy:

Thanks to Janny Hu's article on SFGate, the Warrior Wonder for last night was the Three Musketeers of Jackson, Crawford, and Maggette for I did not realize this was only their 6th game all year where they played together.