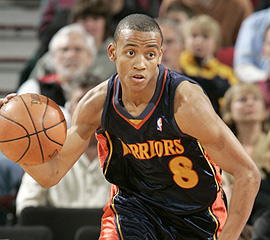 Unfortunately for me, I have to talk about Monta Ellis in this preview, instead of going off on one of my typical LeBron James rants. I had a good one too - it was gonna be based off the other LBJ (Lyndon B. Johnson) and how I like THAT one much better than the current LBJ of America. I was going to conclude that rant with a statement describing why Rob Kurz should be our President after President Obama (man, that's kinda weird to say after all this time with ex-President Bush) gets his turn for the next 8 years. Yes, I said 8 years.

Whatever, I'll save that rant for next season.

For now, I must discuss the more pertinent topic of Monta Ellis.

Yes, the same kid that received the great gift of 66 million dollars over 6 years, then injured himself in a freak moped accident, and then lied about it, is about to play his first game of the season. Hooray! Hooray? I don't know.

Here's what the guy said yesterday...

“I’m really happy, excited and looking forward to tomorrow,” said Ellis. “We decided as a group today after practice that Friday’s game would be a good situation for me. I have worked extremely hard during my rehabilitation, with the help of the Warriors’ staff, and feel that I’m ready to go. It’s just nice to get back to the game that I love and to play for the fans who have been so good to me. I’m really pumped. It’s a great day.

Admittedly, I was quite heated yesterday, and was ready to BOO his childish butt come tip off tonight. Will I still do that? Probably. But go ahead and support him, he's our player for the next 6 years and he's our franchise player. Well, unless we trade him...

I will put down the Haterade, even though, yes, it tastes so so good.

But let me tell you what I AM excited to see tonight - a healthy team. NO wait, that ain't happening.

Andris is in. Bellinelli's out. Anthony Randolph is a maybe. Buike? No clue (someone update that once you find a link).

And did I mention Monta Ellis is in?

Enough of me...hit up the jump for my predictions and to go down memory lane....

Prove me wrong...be a superstar 2night!

Happy to have Monta back?