Share All sharing options for: Game: Warriors vs. Clippers – Yes, I still believe! 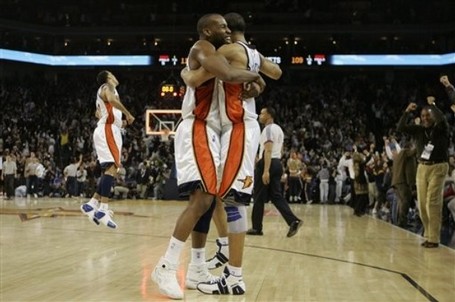 Some things are hard to let go ... but our future is better for it!

The Warriors we have today could possibly be a better team than the Warriors we had back when we had Baron Davis. It's hard to comprehend because we made it to the playoffs that year with JRich and Barnes and created the "We Believe" phenomenon. However, after watching Friday night's game against the top team in the league, I do believe we are destined to become the next Cinderella team ... again!

This is probably the best time to have GSoM Night 6! Are you all excited? Tickets are pretty much all sold out and the GSoM crew will be there screaming our lungs out with the rejuvenated crowd.

The return of Monta Ellis is everything we needed. To see our superstar on the court (while trying to get his legs back) elevated us beyond belief. His attacks to the basket, acrobatic circus shots, and energized fast breaks have completely opened up the floor for our Warriors and given them an uplifting confidence that they not only can hang with the best in the NBA, but now they have something to prove.

Say what you will about Ellis' season injury but look at where we are now heading. We have EVERYTHING to look forward to. We have the opportunity to become a playoff team. Maybe it's too late for this season but we're only 12 games out of 8th place with half a season to play. Weirder things have happened, but I'm not going to hold my breath. Instead I'd like to see us improve our team as much as possible and prepare for next year. That doesn't mean tanking it to get a better draft pick. That means tinker with the starting lineups, play our young guys, and gel as a team and maybe, just maybe we can make a run for the playoffs this year.

We just took the Cavs to the bitter end of a game. Sure we lost, but in reality we won. We took arguably the top team in the league, and lost to a lucky shot at the buzzer. We didn't have 2 of our previous starters and we almost won. Why? Because it took having our star player back (which we all forgot how important he is) to realize maybe we have something here. Look at our roster:

I believe this is a roster that can make the playoffs. I believe Morrow and Randolph are going to be very good very soon. Ellis is becoming a true superstar, Jackson's game control, Crawford's shooting and Biedrins' improvements give us a strong starting unit. Tack on Maggette's incredible scoring punch off the bench and we have depth. I mean he's practically averaging a point a minute keeping the other teams on their heels.

With all that said we have to come together as a team and prove it. Tonight should be a fun test. It's been marked on all our calendars as the return of Baron Davis for some time, but now it's a non issue as he is injured and not even projected to show up. I'd like to see him whether that's on the sideline or on the court. It would have been nice but in the meantime with Monta back and the Clippers' poor season, this should be a good game to start our new era. The Clippers are hammered with injuries to Baron, Camby, Randolph, and Kaman so we better see a win tonight.

All I know is that the Warriors have my support. They always have, but for the first time this season (and maybe prematurely) I see that our future can be very bright and I'm incredibly excited for it! There's no better time than now for GSoM Night 6!!!
GO WARRIORS! 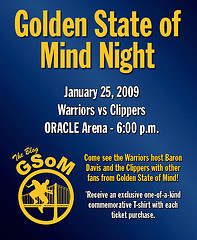 Could YaoButta be right? Are our Warriors destined to believe?