Share All sharing options for: RECAP: Warriors 107, Clippers 92: Wasn’t even that close! 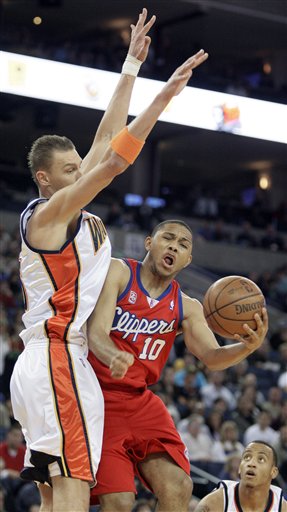 I can't tell if it was our defense ... or just the Clippers?

The drum beats, the screams, the heartbeat of our fans so desperate for a victory to smile about echoed around the Oracle tonight. The thunderous atmosphere emanated confidence and enthusiasm as the Warriors crushed the LA Clippers 107 to 92.

It wasn't even that close. By halftime we were up by 11 points and with five minutes remaining we almost broke a 30 point lead. Maybe it was Ellis' return or maybe it was GSoM Night 6 reining terror on the Clippers with their thunderous roar from the bleachers. Who knows but it wasn't long ago when many believed our season was a complete bust (maybe some still do). Debates and arguments rang whether or not we should tank or trade our players away, but now we have some who believe. Now we know we have a chance to shoot for something better.

No offense to my friends over at Clips Nation, but tonight it was like playing a JV team. It's funny but now Clipper fans know what it feels like to be a Warriors fan. Complete despair. But that's not entirely fair for me to judge because they were missing 4 of their starters. Had they played with Baron and Randolph it would have been a different story.

But I do not want to dwell on the Clipper's problems. Instead I want to focus on the new era for our Warriors and hope to find others out there as excited as I am for the new look.

Let's see how well they played tonight shall we? 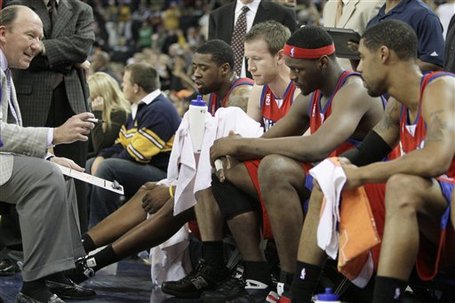 Yes this is who we played against. Can you name one of them?

Let me start off with the negatives because it wouldn't be a GSoM article without at least a couple:

1) Our team was sluggish from the start. I felt as though we knew who we were playing so there was no sense of urgency. That's fine when we win by 20-ish but I'd still like to see some heart. That came later in the game when Turiaf came in.

2) I can sort of see why Nellie gets annoyed with Randolph. He seems lazy at times and then when he makes a nice move or play he has to showboat. I'm all for a good time, but give me a little more young guy before you declare yourself the franchise player!

And now for the positives:

The Game: Wasn't even close. It was actually quite boring if you ask me. I felt bad for the Clippers because they only had 8 players. Not even Al Thornton could make me feel good about them. The Clippers took the lead at the start of the game but by the midpoint of the first quarter the Warriors had a nice lead. That lead turned sizable by the middle of the second quarter and they never looked back. With five minutes remaining in the game our starters were pulled and we got to see Jermareo Davidson, Marcus Williams and Rob Kurz. Yea, you know you have a nice lead when those three are on the floor at the same time for 5 minutes.

"Players coming back after a long hiatus normally have a decent/good first game and then a stinker the next couple of games."

It's just going to take time. Monta looked decent but you can tell his shot wasn't there. He also looked off rhythm trying to force shots or drives to the basket, but all in all I'm happy he's back and he looks healthy. At 85% speed he's still faster than all the others on the court. Scoring only 10 points and 3 rebounds and 3 assists, I'm hoping the next 2 days off will give him good practice time to prep for the frightening 7 game schedule. 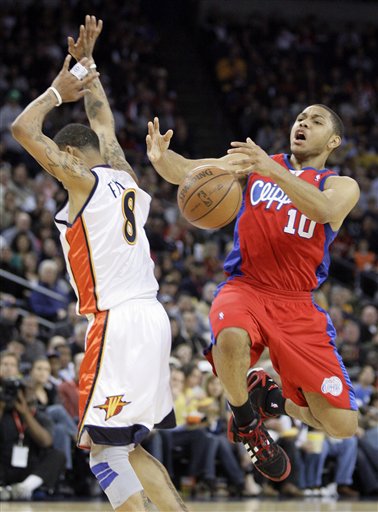 Don't get frustrated ... it will come back!

Corey Maggette: I'm loving this guy coming off the bench. What I'm not loving is what we pay someone to come off the bench, but if it works so be it. What's great about Corey coming off the bench is that his style of play is to take the ball to the net. He tucks his head and draws the foul. With so many open shooters on the sides it's no wonder he shouldn't start. Practically averaging 1 assist per game but scoring 1 point every minute. We'll take that when our starters need a break. Tonight Maggette played 23 minutes, scored 20 points, and had 6 rebounds and 1 assist. It was nice to see him have a good game against his old teammates. 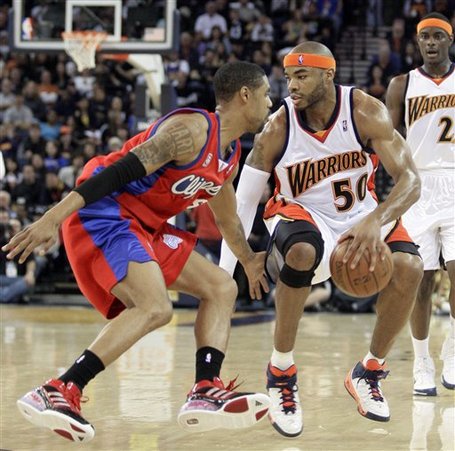 So far this is working.

Azubuike & Turiaf: These guys were the reason the game was fun to watch. First it was Buike who electrified the crowd with a couple sweet dunks and block. He had one of those games that reminded you why you like to root for him so much. Willing to dive for the loose ball and put his body in the lane to take a charge, Buike does everything you want a player to do. I just forgot how much hops he has on some of those dunks. Anyone have a YouTube clip? Finishing with 16 points, he also had 9 rebounds and 6 assists. Ronny had a great game as well not illustrated on the stat line. Ronny had 2 massive blocks in the game bringing the fans to their feet. It seemed as though he had 8 blocks in the game but the statistician only recorded 2. He brought the crowd back into the game who were ready to leave early and beat the traffic home. Instead we had the chance to enjoy some good defense we sorely lack.

Overall GSoM night 6 was a complete success and I wish you were all there to enjoy. Our free shirts peppered the stadium and I'm sure we'll have some post party pictures up and running tomorrow. For now we can sleep well knowing we're on the right way up.

I give the nod to Corey Maggette for the single reason that he hasn't complained once about coming off the bench. You'd expect a scoring machine like that to argue his way back into the starting lineup but instead he's been a true team player and I respect that.