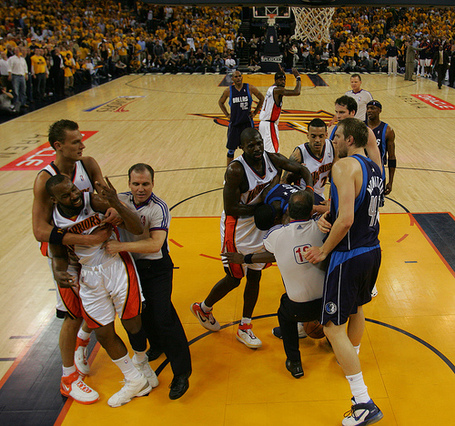 Remember when Warriors-Mavs actually meant something?

The Warriors-Mavs games actually used to mean something. It seemed like the Warriors had their number for a few years - starting when the BoomRich backcourt was put together and culminating with the Greatest Upset of All-Time. t was still slightly fun last year as the Mavs got their revenge helping the Warriors miss out on the playoffs.

But this year, with hardly any players remaining from the Warrior teams that were involved in the rivalry combined with the Warriors being so bad, there's just no excitement. It would be different if Baron and JRich were stepping into the Dallas arena to the sound of boos. This time around Monta, Kelenna, Crawford (maybe), and CJ will be the Warriors backcourt. I'd be surprised if the Mavs fans cared enough to boo those guys. Things have changed so quickly in the last 1.5 years that this rivalry, no longer feels like one. Does it feel any different than any other game on the schedule?

Currently the Mavs are in 8th place in the West, only 1 game ahead of Utah. Had Utah not lost 4 in a row, the Mavs would still be on the outside looking in. Seems crazy that a team with all those big names, Kidd, Nowitzki, Howard, Dampier (ok maybe not Damp) could not make the playoffs in the West. But such is life in the Western Conference. Misery loves company so let's hope the Warriors help Dallas return to their roots, the lottery.