Share All sharing options for: RECAP: Warriors 91, Hornets 87 – Best Game of the Season

This was the Warriors' best game of the season. Despite being on the road, recovering from an embarrassing loss on national tv, battling one of the best teams in the league, shooting poorly, this team played like the name on the front of their jerseys, warriors.

There are so many little intricate details that helped the Warriors win but a few things stood out. 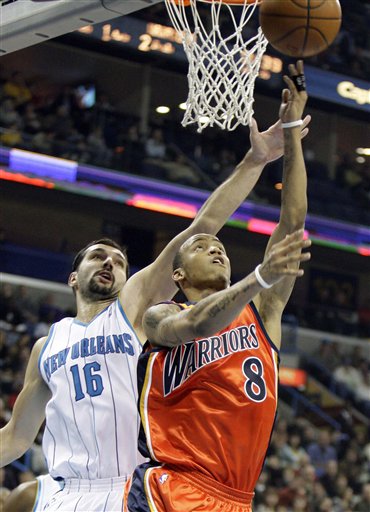 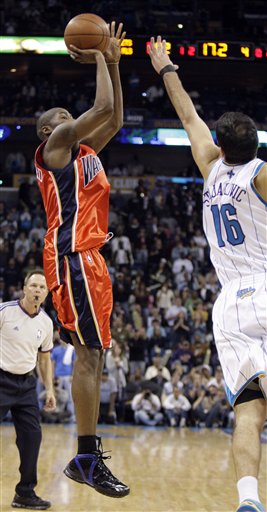 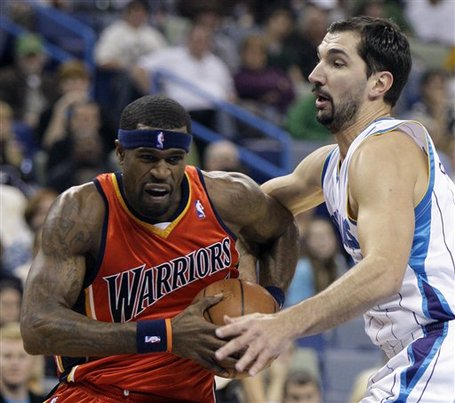 "Someone please call 9-1-1"
Peja Stojakovic got abused over and over and over ...and over. Down the stretch, whoever Peja was guarding was passed the ball. Whether that player was on the wing, at the top of the key or in the post, he waved for everyone to clear out to go one on one. Most of the time it was Maggette, but Jack and Crawford took their turns. It turned into a game of one on one to see if Peja was going to stop anyone.

This is classic Nellie. Find the weak spot in the opponent's armor and keep attacking it until the opponent reacts. Fortunately for the Warriors, the Hornets decided to not do anything about it and left Peja on an island. These weren't all easy shots, but knowing that Peja isn't going to block your shot or stop your drive gave these 3 scorers the confidence they needed to score at will against him. And confidence is the key to scoring. In fact the biggest shot of the night, the one that clinched the game, was Crawford's 21 foot, 1 on 1, wing jumper with Peja's hand in his face. Game over.

Usually Peja can make up for his defense with his offense, but tonight just wasn't his night. 3-11 from the field, 1-6 from 3, 11 points and fouled out in 36 minutes. Poor defense, poor offense, recipe for failure.

Excellent Defense
The Warriors played with some real heart tonight. Up until they started going at Peja possession after possession, they shot the ball so poorly that the only way for them to win this game was to get stops on the defensive side of the ball to keep the game close. And they certainly did that.

The anchor in all of this was Ronny Turiaf's great defense on David West. Even though this was West's first game back after missing 5 games because of an injury, I couldn't have been more impressed by Turiaf. West shot 5-16 thanks to Turiaf harassing him in the post. Turiaf pushed West off the block, making him catch the ball further away from the basket as he wanted. He challenged every jumper. He challenged every post move. He banged with him in the post. And then he went and collected 8 defensive boards (11 total) to make sure he ended the Hornets' possession. He took West out of his game offensively.

But this wasn't just about Turiaf, it was a team effort. Nellie put his worst defender Crawford on their worst offensive weapon, Rasual Butler leaving Jax to guard Paul and Monta on Peja. And Nellie made a nice adjustment to start the second half by replacing Kelenna with Turiaf. The Warriors D was hustling for once. They ran out on jumpers. The Hornets did not have that many clean looks at the basket. Even when Chris Paul went on his rampage, scoring 11 straight points for his team, there weren't too many easy shots. It was odd to see the Warriors challenging shots and then pulling the defensive rebound.

Essentially, the Warriors let Chris Paul do his damage (31 points), but limited what the others did. David West 12 points, Peja 11 points, and nobody else was in double figures. Whatever the Warriors ate or drank before the game to play this kind of defense, please do it again.

Top Notch Effort
It feels like you shouldn't have to congratulate a team on giving great effort, but this was so over and above the effort that we're used to seeing from the Warriors, that I have to call this out. The Warriors missed a lot of open jumpers. Usually when they shoot poorly, they get blown out. But they hustled tonight and showed the kind of effort you want to see every night.

Nellie rode his "veterans" this game. He essentially went with a 7 man rotation with Randolph and Kurz not playing, while CJ and Morrow barely played. Jax played 43 minutes, Crawford 38, Monta 37, Maggette 31, Turiaf 28, Biedrins 25. He had to in order to win this game. Where one possession might make the difference between winning and losing, he stuck with the guys who gave him the best chance of winning. 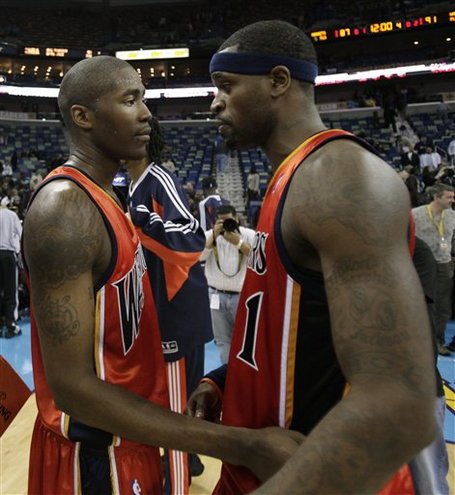 He absolutely changed the game by taking David West out of the game and the Hornets out of their usual rhythm. Maggette on offense down the stretch was amazing and this was vintage Jax with the assists and leadership (and poor shooting), but Turiaf was the biggest game changer.