Share All sharing options for: RECAP: Warriors 93, Rockets 110: Can I take a mulligan? 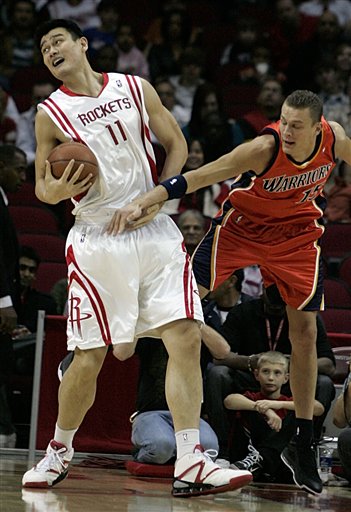 Stroll in the park for Yao tonight.

Let's forget about this game shall we? Like failing last semester's math test right before winter break, most people won't remember this game when the Super Bowl starts tomorrow afternoon. And for good reason. The Warriors lost by 17 points tonight because they couldn't contain Yao Ming and Ron Artest. They also couldn't buy a bucket nor play solid defense so it was a disappointing loss coming off a fantastic win against the Hornets.

To be 100% honest with ya'll, my mind is already on tomorrow's party. I don't want to think about this game and most of you were correct in saying that the Warriors would have a hard time playing a back to back game on the road. I guess this was a wake up call for me.

For now let's look forward to tomorrow and not dwell on the game so much but focus on what really happened: 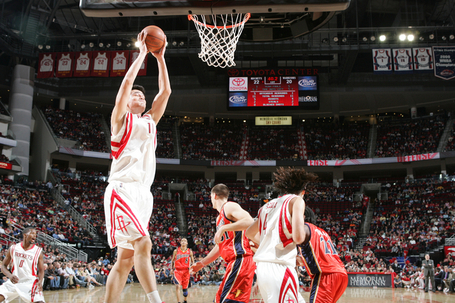 Not much you can do here.

Yao Ming: I hate it when saintdee is correct and I'm wrong. I knew Yao would have a good game but I seriously thought Biens and Turriaf would have contained him a little. It didn't seem like Yao played that many minutes but he came away with 25 points and 11 rebounds. More importantly he dominated the paint and collected most of his points by grabbing the loose balls and stuffing them home. I was hoping Nellie would have gone small on him but like saintdee said, we don't have Al Harrington anymore to contain Yao.

I was glad to see Yao having a good game, I just wish we could have won the game. Again, I'll refrain from going off on my tangent of how I wish we had him on our team and I'll just focus on tomorrows Super Bowl chip dip. 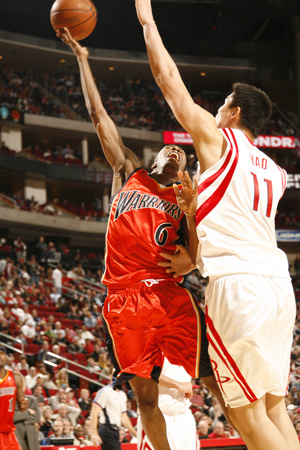 Not much you can do here either.

Ron Artest: Remember all those debates on GSoM whether or not we should have traded for Ron Artest? Well I hate to say it but he looks like he's gained his composure. Granted it's only been a year and a half and he's in a good position right now, but god I'd love to have a guy like him on our team. Honestly, if we had a physical presence like him we'd be ten times better. Not only would a guy like Artest improve our defense, but he'd be able to command better positions for our shooters on offense.

Tonight he picked up TMac's place by scoring 27 points, 7 rebounds, and dishing out 7 assists. He had his way with our Warrior defense (or lack thereof), and really hurt us on his 3 point shoot by going 4 for 6. I was hoping Morrow would have done that instead. 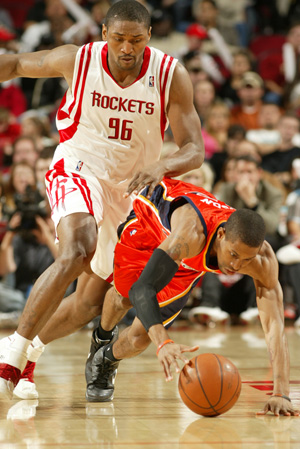 Got to respect a guy who can steal and dive for the loose balls.

Warriors: This is a PERFECT example of night and day games. It's also a PERFECT example as to why I should be an NBA coach or analyst or tv broadcaster! I always say, when you play as a team you win. Last night they did that against the Hornets. Tonight, I saw too much isolation play and it spiraled us downward to a level where we couldn't get out. Guys tried to do it on their own and that never works. Granted the Rockets do have decent defensive players but when I have to see Jackson dribble around 3 people to get his shot off, it's no wonder he went 5 for 13. The sad part is that our +/- stats are embarrassing. I'm hoping this is a game coach Nellie will pound into their heads on why we need to focus on working as a collective unit.

The good news we can take out of this game was the fact that we were still in it with 5 minutes remaining. Only down by 7 or 8, I felt as though we could have made a run for it, and be in there till the very end. But instead we tried to do too much individual play and lost it with 3 minutes remaining. Monta ended the night with 10 points, and Maggette had the team high 17 points. Not terribly impressive but let's drink up and hope Monday against the Spurs will bring better results. 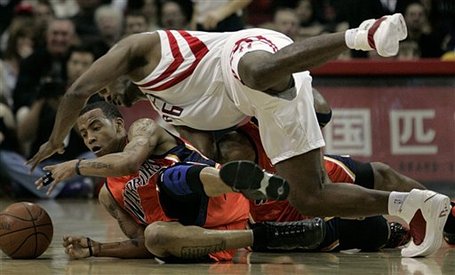 It was that kind of night. Monta where you at man?

GSoM members for staying home on a Saturday night to watch this!