(I wonder if people really know who CJ Watson is...)

Despite a somewhat lackluster free-agent class of summer 2009 where Trevor Ariza was the headliner, the NBA off-season was still pretty exciting nonetheless.  Richard Jefferson switched conferences and makes me think the Spurs will continue their every-other-year championship a reality.  Vince Carter finally got to move back home.   Hedo Turkoglu got to go home as well...at least as "home" as the European city of Toronto can be for an Eastern European dude.  Upper-echelon teams wondered and battled over whether they should hold onto their team leaders (Turkoglu, Andre Miller, Carlos Boozer) or succumb to the restrictive pressures of the economy.  Teams strategized.  Teams made moves for the betterment of their short term and long term futures.

And then, you had, what I would like to call, Watson-gate.

Honestly, the tug-of-war battle between our Golden State Warriors and the Orlando Magic over CJ Watson's services as a back-up guard might have been the most head-scratching and least inspiring drama of the whole summer.  I mean, really, was this battle over CJ Watson really something to get personal about, as Orlando GM Otis Smith felt about the whole situation.  In one word, I would describe this ordeal as "unnecessary."  But I guess that's typical Warriors fashion to piss off their own players (Marc Jackson).

Watson is a solid back-up shooting guard (since he doesn't do much distributing) and has the one thing that Warrior players never seem to have:  a mid-range game and a mid range jumper.  But aren't undersized, shoot-first point guards as plentiful in the NBA/NBDL/CBA/PBA talent pool as say the annoyingly unathletic  tweener PFs (Ike Diogu ...)?

So what value does he have for a Warriors team overloaded with shoot-first players -  especially at the 1-3 positions that all guards have to play under Nellieball?  Is there something we don't know about Watson's future with the Warriors?

Check after the jump 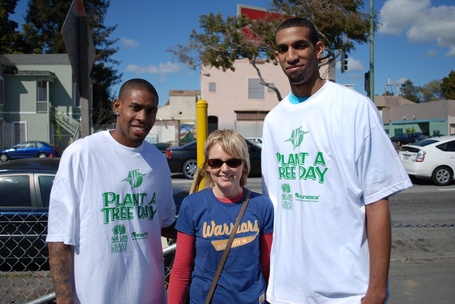 Watson plants trees, but is unsure about planting roots in the Bay Area

Apparently, CJ Watson can play at least 4 positions on the Warriors:

The point guard slipped during the team's very first workout of camp. Interestingly, the 6-foot-2 Watson had one of the funnier comments of opening day, boasting, "I re-signed here because I knew I was going to get minutes. I mean, I might play power forward here."  (via Yahoo! Sports)

Is THIS why Otis Smith was rushing to sign all these Warriors?  OR is CJ Watson the insurance policy now that Brandan Wright is out again with shoulder injuries??

But jokes aside, Watson clearly didn't want to be here.  As some reports note, with the glut of point guards, minutes might be hard to come by.  Instead of going for the longer term stability that the Warriors offered (3 years at $5million), Watson took the one year qualifying offer of $1.05 million.  He even rejected the Philly 1 year offer of $2.3 million.

The other subtext is how bad are the Warriors that when guaranteed money is as hard to come by as it is in this economy, that people are more willing to opt for the "freedom of choice."

Anyway, back to CJ Watson.  I'm impressed the Warriors showed some restraint and resigned him for some minimum dollars.  For most of the season, he was a one trick pony.  Score in bunches, do little else.  And maybe that's just what was asked of him.

But in the last month of the season, when the Warriors starters were either resting up or out with injuries, Watson ended up, surprisingly averaged 17ppg, 5.5 asts, and 4 rbs a game.  Stats-aside, Watson was probably one of the few ball-handlers on the team that could dribble proficiently with both hands.  Although he often dribbled too much, you won't expect him to make a telegraphed pass Monta Ellis--style or to dribble into a triple team expecting-a-foul-only-to-get-stripped (see Stephen Jackson and Corey Maggete).  And unlike all the rest of the Warriors, Watson actually makes his free throws!  Check his last season stats:

I guess we could say that CJ Watson is minimal risk to the Warriors.  I admit, I get scared watching Monta or Jax bringing the ball up the floor.  This is the relief that Watson brings to the Warriors.

So what can we expect from this somewhat disgruntled players who's forced to stay one more year in Oakland?

I imagine that CJ Watson will put up about the same numbers he did last year.  It's highly unlikely that he'll be able to duplicate the numbers he put up in April unless his teammates get as injured as they were last year.  Expect him to play the instant offense role off the bench.  Or maybe he'll start at power forward when Nellie re-invents 'small-ball.'