RUMOR: Chris Bosh to Warriors for Andris Biedrins and "a lot more"

Share All sharing options for: RUMOR: Chris Bosh to Warriors for Andris Biedrins and "a lot more"

We know Larry Riley and Don Nelson would be ecstatic to have Chris Bosh in a Warriors jersey this season, but would the Raptors actually trade away their cornerstone even before the 2010 free agent madness? 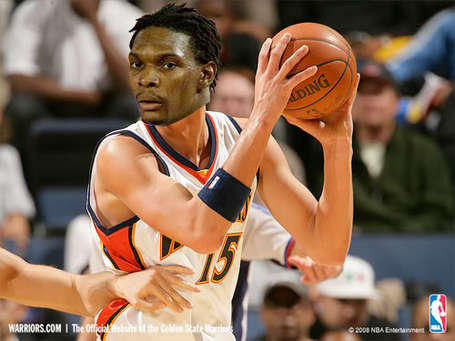 Jump for the details!

Raptors forward Chris Bosh becomes a free agent at the end of the season and for that primary reason the four-time NBA all-star has yet to commit to the U.S. team for next summer's FIBA world basketball championships in Turkey. In the rumour department. Bosh has been mentioned in a possible trade to the Golden State Warriors in a deal that would involve Andris Biedrins coming to the Toronto, with, of course, a lot more, if there's any substance at all to the rumour.

Hat tip to Yahoo! Sports: Raptors' Bosh could be headed to Golden State

The interesting aspect of this rumor is that it's emanating from Toronto, not the Bay Area this time. Maybe it's just a rehash of an old rumor (very likely), but at this point in the season it still provides an interesting discussion piece and a distraction from all the "Captain" drama [SBNation Story Stream].

We covered this at length the last time the Warriors were rumored to be targeting Chris Bosh, so I'll rewind the tape a bit:

You win in this league with superstars and stars. I'm not convinced that Bosh is a superstar or will ever be one. I do think that's a big red flag that the Craptors couldn't even qualify for the "Not-So-Elite-8" in the Leastern Conference this past season. But he is a legit All-Star caliber big man and a proven commodity (Career Numbers via Yahoo! Sports). Those are hard to come by, especially for the Golden State Warriors who haven't had an All-Star power forward since Nate the Great Thurmond in 1974. (NINETEEN SEVENTY-FOUR for crying out loud!)

If the Warriors can net trade Chris Bosh this summer (and I'm not saying the Raptors are dumb enough to do it for what "assets" the Warriors have), they've got to do it. It could be a franchise altering move just like the trade for Baron Davis back in 2005.

Using ESPN's Trade Machine what reasonable packages can you assemble to bring Bosh to the Bay?

Make sure to head on over to Raptors HQ for some great perspective from our friends in Toronto.

More from the GSoM vault:
99% of rumors never happen, but 99% of them are fun to talk about!