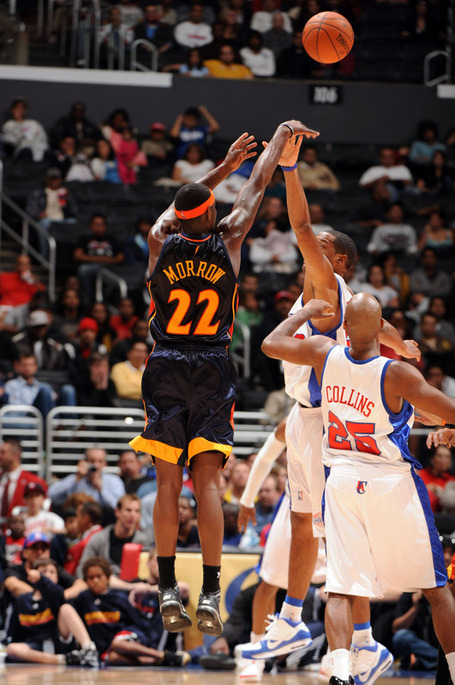 Psychology of Hoopsology 101: Muscle memory is the best type of procedural memory

Please excuse the ultra-brevity on this extra mini-recap. I'll be perfectly honest. I just wanted another excuse to run this poll for the 3rd time in as many Dubs games.

I also wanted to highlight Anthony Morrow aka Chocolate Rain aka AMMO's line of the night and give the man his proper ink:

Let's review what Morrow has done this preseason:
It's raining game in Northern California- yes, indeed. Where's Raphael Saadiq when you need him?
I'll be the first person to tell you how absolutely meaningless the preseason is (the Warriors 2009-2010 record is still 0-0), but this my friends means something. I don't expect this many offensive explosions from Morrow during the regular season when opposing NBA starters are playing real minutes and somewhat trying on defense, but this is making my earlier Reggie Miller comparison not look stunningly foolish. 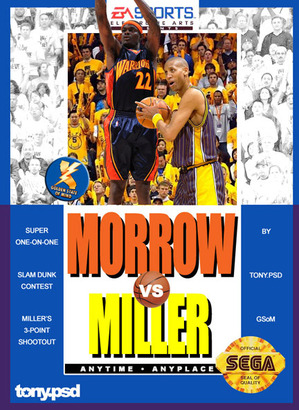 This guy was UNDRAFTED folks. He beat out overhyped rookie Marco Belinelli and Chris Mullin trade failure Marcus Williams. This is a great story.
In an offseason/ preseason where things have gone especially disastrous thanks to some serious ownership/ front office ineptitude and some tantrums from team "captains", it's a real blessing for Dub Nation to see something like this.
I'll pass the mic to my man Adam for some more substantive thoughts on the game: Half Right (Warriors 117, Clippers 124) | Fast Break

I can’t stress how nice it is to see Curry looking for Morrow — still almost always open on the perimeter. Curry had his most Nash-like performance yet Monday, darting in and out of the defense, waiting for shifts to open lanes to the rim or to unguarded teammates. He didn’t rack up a ton of assists, but created a ton of opportunities through his motion and quick decision-making. The rookie already seems to have great chemistry with Morrow and Azubuike, and to a lesser degree Ellis, Randolph and Biedrins. It’ll be a pleasure to watch him this season as he gets even better at finding his teammates in their favorite spots.

Over at Clips Nation Steve's got some good words too: Clippers 124 - Warriors 117 (Pre-season) - A Tale of Two Halves - Clips Nation

It's way too early, but tempting nonetheless, to say that Baron Davis is now ready to be the impact player the Clippers thought they were getting - a year later than expected, but better late than never. After being dismantled by his former teammate Monta Ellis in the first half, Baron came out and embarrassed the kid in the second - picking him clean twice in about 40 seconds to set the tone for the rest of the game - not in my house Monta. The Clippers early third quarter comeback was all about Baron - during the 22-5 run that turned the game around, he scored nine points and assisted on eight - that's 17 of the 22 points the Clippers scored. This is the player - the presence - we remember from that Warriors team in 2007. He even spiked Anthony Randolph at one point - he literally spiked the dude, Baron making like Dain Blanton on the AVP tour. With Sebastian Telfair resting a tweaked hamstring, Baron was the only true point guard available - and he was +18 in his 30 minutes on the floor. And yes, I think he may be that important to the team this year.