What do Ralph Sampson, Uwe Blab, Alton Lister, Tyrone Hill, Victor Alexander, Rony Seikaly, Todd Fuller, Erick Dampier, Adonal Foyle, and Troy Murphy have in common?  They've all been opening night starting centers for the Warriors in the past twenty years -- and their performances as Warriors all fall short of what Andris Biedrins has brought to the team.  But despite nearly two decades of longing for a high quality center, some Warriors fans don't seem to appreciate fully the one that fell into their laps at the 11th pick in 2004, fresh from Riga, Latvia.  That'll likely change in 09-10, and hopefully not only after Andris' departure. 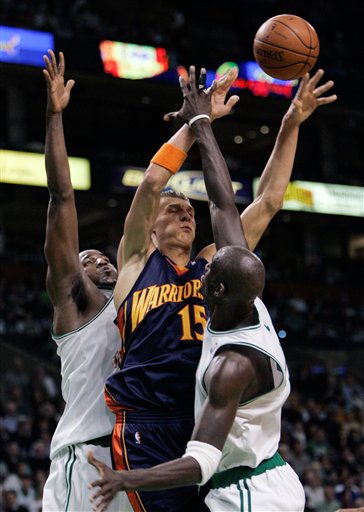 Before breaking down what Andris is, it's worth a quick review of what he isn't.  He isn't the reincarnation of Wilt Chamberlain and no one ever labeled him Mini/Lil'/Baby/Junior Shaq.  He's not the guy you want going toe-to-toe with Dwight Howard and he can't see eye-to-eye with Yao.  He's not the guy you want shooting two free throws when you're down by 1 with no time left on the clock.  He's not going to be a Hall of Fame center, but those types of players typically only come along every 5-8 years -- and when there are 30 teams drafting you're a long shot to land one (unless David Stern is kindly willing to put your draft envelop on ice).  Andris is a limited player, but his limitations just happen to fit perfectly within the Warriors' current style of play.

Whether you call it Nellie ball, small ball, or gimmick ball, Don Nelson uses his centers in a unique way.  He simultaneously wants them crashing the boards and blocking shots, but doesn't want them plodding along or clogging up the middle.  They need to be mobile and agile, with soft hands and good instincts.  It's nice if they have a 10 foot jump shot or can pass from the high post, but their primary job is to stop penetration, secure the defensive rebound, start the break, and get down to the other end of the court to be in offensive rebounding position before the shot goes up (not always an easy task when the Warriors are going full throttle).  No one has been better at this since Nelson first coached the Warriors than Andris Biedrins.

But Andris' outstanding play often gets overlooked because he's so foundational.  He's not the focus of the offense, he just provides the stops and rebounds that allow the rest of the team to get out on the break.  He's usually not the man streaking to the basket for a dunk, but it's often his screen that created the glimpse of daylight making the play possible.  And Andris might not be getting many shots per game, but it's his offensive rebounds that give the other Warriors even more looks at the basket.  When Andris goes down -- as he did with appendicitis two years ago and a variety of ailments last year -- opposing guards get closer to the rim, opposing big men get more second chance points, the Warriors take longer to start their breaks, the lanes to the basket collapse, and the second chance points dry up.  The emergence of Anthony Randolph has helped take some of the pressure off Biedrins, but on far too many nights the Latvian and longest-tenured Warrior (along with Monta) still looks like Custer, making his last stand in the paint.

So while I could go on and on about how well Andris reads opponents when rotating on defense, or how good he is at making quick passes from the block, or what a tireless, positive force he's been on the team through these turbulent times, we've still got to wrestle with the fact that the team he anchored last year simply wasn't very good.  And if the Warriors are going to improve, Andris needs to step up.  I think he's up to the task -- and there are plenty of signs that 09-10 might be the year he makes the jump from solid player to difference maker.

But despite all of the above, Andris' primary role on the Warriors this off-season and preseason has been as the leading trade rumor target.  Whether in the rumored deal for Stoudemire last June or Chris Bosh this week, Andris' name keeps popping up.  But the fact that he continues to be the guy other teams want should give us serious pause before we swap him out for whatever rent-a-big-man Nelson, Riley, and Rowell think will help give the team an immediate boost.

In a perfect world, we'd get to pair a rebounding / dirty work center like Biedrins with an offensive power forward like Stoudemire or Bosh.  But swapping one for the other seems to create as many problems as it solves, particularly since our team is in much greater need of rebounding and defense than scorers.  Fortunately, the perfect world scenario might just require a little patience -- while we wait for Anthony Randolph to mature.  Andris Biedrins has grown up on the Warriors, from the youngest player in the league to a team captain.  To abandon his development now -- just as he appears poised to round out his skills along with a young crop of well-matched teammates -- would be a classic short-sighted Warriors move.  Skilled centers like Andris don't come along every day -- as we learned all too well in the two decades before Andris arrived.